THE MAN WHO WROTE A $4 MILLION CHECK TO STOP FAIR DISTRICTS…
How did Hollywood Producer Stephen Bing make his money?  Well, you might assume that he spent 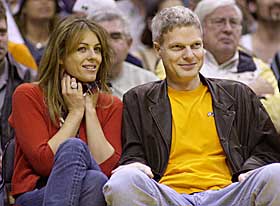 decades working to climb the Hollywood ladder, working as a waiter or a deliver boy as he struggled to learn the craft of producing movies.  Alas, poor Stephen made his money the old fashioned way — he inherited it!  When his grandfather, Leo Bing, an accomplished New York real estate mogul, passed away, all of the Bings were able to share in the divvying up of his reputed $600 million fortune.  He has certainly parleyed that and now, according to Forbes, is personally worth upwards of three-quarters of a billion dollars.

Bing has a history of generosity for liberal causes – he was a key financier for former President Clinton and his schemes.  Bing wrote a check for a million bucks to help finance a Democrat National Convention, and he ponied up another cool million to fight a tax repeal measure on the California ballot some years back.

Well, "Mr. Generosity" is at it again, with the announcement of a $4 million donation to the "No on 77" committee — Prop. 77 being the measure that would bring about fair legislative districts by taking the power to draw political boundaries out of the hands of the very politicians who, after the last redistricting, drew lines that are so iron-clad that not one legislative seat changed partisan hands in the legislature or the Caliornia Congressional Delegation.

It would be nice if Bing would spend more time with his girlfriend, actress Elizabeth Hurley (that’s the two of them sitting courtside at a Lakers game in the photo), and less time trying to promote liberal causes.

You can read more about this single-largest contribution to a political cause in this article from the Los Angeles Times or read Bing’s IMDB entry here.

Oh yes, this further ads to my lack of sympathy when labor unions take on the Hollywood ‘elite’ — see my recent post.

Added at 3:30pm Sat:  If you REALLY want the scoop on bing, check out this post on Steve Frank’s blog.  Amazing!