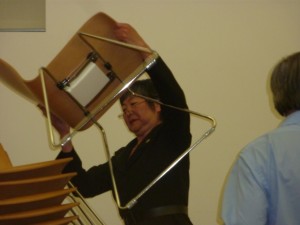 What is Assemblywoman Yamada (D-Davis) doing in Otay Mesa on a Wednesday night?  Touring the border?  Offering Northern California’s help on water issues?

Nope, she was here to support her embattled daughter Midori Wong, the Executive Director to the San Diego Redistricting Commission.  For the FlashReport readers around the state not familiar with the latest controversy in American’s Finest City, here is a quick recap:

Back in 1992, after a redistricting scandal that lead to the recall of a sitting City Councilmember, the voters of San Diego created an independent commission, similar to the Prop. 11 Commission, to remove politics once and for all. Redistricting Commissioners must be “impartial and non-partisan” according to the City Charter but local TV station KUSI broke this Special Report on Monday, which invoked a furious war on twitter here and here and the local blogs here and here and here.

More is coming out as this story is still breaking. One this is clear is that 24 year-old Midori Wong is uniquely unqualified to serve as the Executive Director of the “impartial and non-partisan” Redistricting Commission (she makes over $80k, too). Over her infantile career in politics she has worked for partisan Democrat Assemblymember Helen Thomas, campaigned for Democrats, and contributed to Democrat candidates. She’s currently serving on the Advisory Board of the New Leaders Council along with staffers from the San Diego Democrat Party, Labor Council, Courage Campaign, Planned Parenthood, and half a dozen other Democrat staffers and operatives.  The New Leaders Council is an organization dedicated to prepare young progressive in politics and public policy.  A more blatant conflict of interest could not exist. If Midori Wong had disclosed her partisan ties she would have been disqualified before she even walked in the room.

With that much controversy not wonder her mother fly down from Sacramento to support her daughter. Mom even stuck around afterwards to help her daughter put away the chairs. Who says that Democrat don’t love their kids too?