Carl DeMaio: The Reform Movement in San Diego and My Campaign for Mayor

[Yesterday, Republican San Diego City Councilmember Carl DeMaio, whom we have highlighted many times on this page for his leadership in fighting for real, meaningful public employee pension reform, officially declared his candidacy for Mayor…  Below is a column is has penned for FlashReport readers on his candidacy… – Flash] 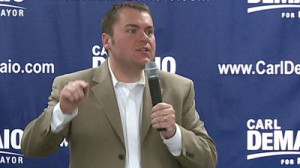 In many ways, the City of San Diego is a lot like the State of California as a whole – both face a massive financial crisis, Party registration and socio-economic demographics are virtually identical, and both have been controlled by a strong Democrat-majority in the legislature backed by special interest lobbyists and organized labor.

But there is one key difference: In San Diego, there is a clear and specific reform movement underway that is producing solid results. We are also poised to make significant gains in the 2012 election – meaning even more reforms are on the way.

Last November I released the Roadmap to Recovery, an 80-page, comprehensive, detailed plan to solve San Diego’s ongoing financial crisis. We released this plan in the wake of voters’ rejection of Prop D, a sales tax increase I was proud to lead the charge against.

The Roadmap produces surpluses in the first five years and restores neighborhood services that have been slashed in recent years in order to fund outrageous pension payouts. We accomplish all this without raising taxes or fees, or resorting to accounting gimmicks or one-time monies.

Since then, I’ve held a series of Town Hall meetings across the city to discuss my proposals with the public. The message we are hearing is clear: San Diegans are ready to do their part to fix their city government. And they are ready to support the reforms laid out in the Roadmap.

That’s why yesterday I joined over 200 residents of my district to make my announcement.

I am running for San Diego Mayor to implements this plan, fix San Diego’s financial problems and make city government work again for the people.

San Diegans are tired of empty rhetoric and broken promises. They want details and firm commitments.

For close to a decade, the dreams of our city have been held hostage because our city government is in a complete state of deficit, dysfunction and disrepair.

I spent several years bringing the city’s financial problems to public light as a watchdog and urging our city leaders to act before the problems got worse. But city leaders refused to act.

Instead of giving up, I decided to do something about it – to be part of the solution – and I ran for City Council so I could

With the help of our strong grassroots support network throughout the city, we have been able to stop a lot of bad ideas – like the an unnecessary  $300 million dollar new City Hall.

While the results we have achieved so far are a good start, they are only the beginning – and we must do much more to get our city government back on track.

That’s why I am sponsoring the Comprehensive Pension Reform ballot measure for the June 2012 election.

Because of my commitment to pension reform and the Roadmap, the public employee unions have made it clear that I am now Public Enemy #1.

That doesn’t deter me, because San Diegans are ready for serious reform and serious leadership. That is why I believe we will succeed, and make San Diego a new model for government reform.

And my hope is some in Sacramento will take a page from our success and our continued momentum. You will never get out of the minority, and you will never achieve real reform, unless you are willing to break the mold, speak from the gut, lay out bold reform plans, and challenge the system head on.

The learn more about my campaign and the reform movement in San Diego, visit www.CarlDeMaio.com.