A Bad Budget With A Silver Lining

Yesterday was a very bittersweet day for Californians, relative to their state government, as the Democrats pushed through an “on time” state budget plan. The good news is that due both to the resolve of Capitol Republicans to oppose tax increases, and a seemingly equal resolve by California’s public employee unions to oppose any meaningful spending and pension reforms, the budget that was adopted does not include the placing of massive income, sales and car taxes on a special election ballot, nor does it include the “bridge to nowhere” – our name for the outrageous request of the Governor that the legislature extend such taxes for a year, regardless of what voters might do.  So when one considers the actions of the Democrats yesterday, it must be in the context of understanding that things could have been a lot worse.

I couldn’t say it better than Assembly Republican Leader Connie Conway: “By standing united together as the last line of defense for California taxpayers, Republicans were able to stop Governor Brown’s massive $58 billion tax increase from becoming reality.  This means that hard-working Californians will see much needed tax relief on July 1st.”

That having been said, what Democrats did do yesterday was pass what veteran Sacramento Bee columnist Dan Walters rightly refers to as a “gimmicks and debt” budget.   In his column this morning, Walters points out that, “…by whipping a gimmick- and debt-based budget through both legislative houses lickety-split, Democrats appear to be petty and self-serving, thus adding to their already poor public standing. And they may have weakened Democratic Gov. Jerry Brown’s hand and bolstered Republicans in the budget game.”

Unfortunately, this sham of a spending plan passed on the deadline prescribed by the State Constitution, June 15th, is not a “do no harm” budget – it’s actually a “do more harm” budget.  Despite the protections in the State Constitution that require a two-thirds vote to raise taxes (strengthened by the passage by the voters of Prop. 26 last year), this budget contains many provisions that will sock it to taxpayers including some maneuvers that allow for an increase of sales taxes at the local level and a hike in vehicle registration fees (though thanks to GOP resolve taxpayers will still see a net reduction in these taxes comes July 1st), a substantial fee being charged to many Californians (in higher risk areas) for fire protection, and more.

The “gimmicks” in this budget are plentiful, and range from an obviously unconstitutional raid on a billion dollars from California’s First Five funds (this requires a ballot measure to do), relying on over a billion dollars from the sale of state office buildings and assets, and the plan budgets for a large amount of money coming from the federal government that everyone knows is totally unrealistic.  I am trying just scratching the surface with this stuff.  This budget truly is a sham, a fragile house of cards constructed by a union-controlled legislature that simply is unwilling to make the additional required cuts in state spending to ensure that, like you do with your family, you do not spend more than you make.

Of course if Democrats were willing to pass this kind of “gimmicks and debt” budget all along, why did they do it before now?  Simple.  While they heralded the passage of Prop. 25 and its provision that a budget and its trailer bills need only a majority vote for passage, they were confronted with the inconvenient provision of the measure that states that after the June 15th deadline, legislators receive no pay or per diem payments until they have passed a budget.  Thus, we get a bad budget, on time.  As Assemblyman Tim Donnelly rightly dubbed it in his floor speech (which you can see below), this is the Legislative Paycheck Protection Plan.

Senate Republican Leader Bob Dutton, commenting on this budget, had this to say, “This is the Democrats’ third simple majority-vote budget in just three months without any Republican reforms.  This Democrat budget is an irresponsible package that has no real pension reform, no hard spending cap, and no plan to put people back to work and no change to government as usual.”

Assemblywoman Conway added, “It is disappointing to see Sacramento Democrats embrace the same reckless budgeting of years past.  In our budget roadmap, Assembly Republicans showed that we can responsibly balance the budget and protect our priorities without raising taxes.”

It would seem that the only “silver lining” to this budget rain cloud is in two of the trailer bills that really go after redevelopment agencies in California.  We have written much on how these agencies, with rare exceptions, have been extremely bad actors in our state (you can read a column from Assemblyman Chris Norby here, or watch a video from Tom McClintock here or go for lots of info, go to Stop The Money Pit).  The two most prominent, negative aspects of these RDAs have been significant, ongoing abuses of private property rights (declaring private property “blighted” and then using government to take, by force, this property from its rightful owners) – and of course central to the actions of RDAs is politicians manipulating the marketplace, and providing taxpayer subsidies to those lucky enough to be in favor with local government leaders.

Of course the terrible attributes that I outline above were not the motivation for the rush of Democrat votes to pass legislation that puts significant road blocks up going forward for RDAs.  Sacramento politicians (and their labor union bosses) really were motivated by going after the money sitting in the bank accounts of hundreds of RDAs around California (well over a billion dollars).  As they say, however, sometimes politics makes for strange bedfellows, as conservatives statewide have been increasing the level of support for any action the legislature might take to curb the influence of RDAs. 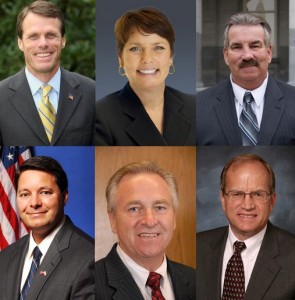 Ironically, it has been GOP legislators that had been protecting RDAs up to this point, for reasons that would take too long to lay out here.  But it is important and significant to note and praise six Republican legislators who stood up to the immense lobbying pressure from the RDAs and voted one of the two anti-RDA bills – those Republicans were State Senator Ted Gaines and Assemblymembers Beth Gaines, Dan Logue, Allan Mansoor, Jim Neilsen, and Chris Norby.   Conservatives owe a debt of gratitude to these six legislators who courageously cast the right vote for the right reasons (I cannot tell you about the amount of money, lobbyists and pressure that the League of Cities and the Redevelopment Association brought to bear – especially on Republicans).

There is a delicious irony in the RDA bills that should not be lost on readers.  The legislation basically says that RDA’s must voluntarily cough up their funds or else they are individually abolished and the funds are taken anyways.  In other words, they are forced to participate at political gun point.  A point not lost on Democrat Senator Rod Wright, who said of this provision, “Now, in South Central L.A. we call that extortion. I’m not sure what you call it in Sacramento, but in South Central, that’s extortion. If you don’t give me your money, then I shoot you in the head. That’s extortion plain and simple.”

The irony is that this kind of use of government force about which RDAs will now complain loudly bears a strong resemblance to the use of government force by RDAs in putting similar pressure on private property owners.  Very similar, indeed!  This really is a situation where you sit back and say to yourself, is it really so bad to finally see someone give the bully on the playground a little of his own medicine?

Now all eyes go to Governor Jerry Brown, to whom this budget will be transmitted for action.  What will he do with this political pickle?  The two most prominent pledges that Brown made in his campaign would be violated if he were to sign this budget.  The first, that he would not support gimmicks in a budget – one that “kicks the can” on our structural spending problems as this budget certainly does.  Democrats are rather unabashed about it.  The second that he would not support tax increases that are not voted on by the people – and as I pointed out above, this budget does in fact contain some tax increases.

From where I sit, vetoing this budget should be an easy call, and the Governor should do so the moment it reaches his desk.  It’s a terrible spending plan that is unrealistic in its projections, contains many provisions that are so boldly unconstitutional, and refuses to acknowledge that a responsible plan that does not include tax increases must have billions of dollars more in real cuts in state spending.

The only caveat to my urging of the Governor to veto the budget is that within the heap of poor public policy that is on his desk in the form of lots of trailer bills are a couple of bills that he should sign – the bills that I mentioned above that take a sledge hammer to Redevelopment Agencies.  The signing of these two bills will go a very long way towards reigning in one of largest sources of private property rights abuse and market manipulation that exists in California today.

It is probably realistic to expect that Brown will sign this bad budget.  California Republican Party Chairman Tom Del Beccaro is spot on when he says, “Jerry Brown is capable of only providing empty rhetoric, not real budget solution.  Brown obviously lacks the political fortitude necessary to include any of the publicly-popular reforms Republican lawmakers are proposing.  He’s obviously terrified at the prospect of crossing his political masters, the public employee unions.”

In closing, if the Governor signs this budget, state government will limp into next year using phony budgeting and questionable tax and fee increases, and without the kind of permanent cuts that would go to actually dealing with the state’s structural deficit.  And, of course, we’ll all have to look to the ballot box and citizen-based initiative campaigns for the kinds of meaningful reforms that Democrats are either unwilling or unable to pass in the form of legislation – ranging from curbing the undue influence of public employee unions and meaningful pension reform and a real spending cap to ensure that in better economic times, politicians do not once again overspend.

Assemblyman Tim Donnelly below gives a solid floor speech attacking what he rightfully refers to as the, “Legislative Paycheck Protection Plan.”

Senator Tony Strickland, Co-Chairman of Taxpayers Caucus, outlines some of the taxes in this budget and remind Democrats that they own this budget.

Senator Doug La Malfa makes some comments after the floor vote that are worth your time to watch.

One Response to “A Bad Budget With A Silver Lining”