[Publisher’s Note: We are pleased to offer this original, exclusive commentary from FR friend Paul Jacob.  Paul Jacob is president of Citizens in Charge, the only national organization dedicated to protecting and expanding the initiative and referendum rights of every American without regard to partisanship or politics – Flash] 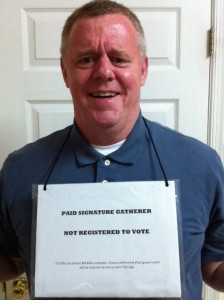 Paul Jacob, Wearing a sign that complies with the requirements of this bad legislation...

Centerville, Virginia, man made news when he agreed to his wife’s demand that he stand at a busy intersection wearing a sign emblazoned “I Cheated: This is My Punishment.” His merciful wife ended the punishment after just a couple hours.

In recent years, a few judges have sporadically sought to shame criminals in similar fashion. Back in 2007, several people convicted of shoplifting opted to avoid a longer jail sentence by donning a sign outside the store they had ripped off. One sign read, “I Am a Thief, I Stole from Wal-Mart.”

But Wal-Mart soon opted out of allowing such humiliating and dehumanizing spectacle outside their stores.

Now, the California State Senate has passed new legislation to force folks to wear similar signs. But not for committing any crime, mind you.

State Sen. Mark DeSaulnier’s Senate Bill 448 seeks to harass and belittle the citizens who circulate petitions by making each person wear a sign “on his or her chest” that reads “PAID SIGNATURE GATHERER” or “VOLUNTEER SIGNATURE GATHERER.” The sign would also inform the public in which county the petitioner is registered to vote, or, if a person circulating a petition were not registered to vote, the sign must say, “NOT REGISTERED TO VOTE.”

The lettering on the sign must by law be in at least 30-point type. That’s rather large. Bigger than a “badge” as Sen. DeSaulnier’s legislation calls it.

And clearly, it is not intended as any badge of honor.

Still, DeSaulnier touts his legislation as simply providing “a little transparency.” Transparency is usually a good thing, after all. (No word on when the state senator will be introducing his bill to advance further transparency by requiring legislators to don signs declaring in large type, “PAID STATE SENATOR” or “PAID ASSEMBLY MEMBER.” Stay tuned.)

Even when it comes to this so-called “transparency,” DeSaulnier’s approach proves mighty selective. Or was it simply an innocent oversight that SB 448 doesn’t require those collecting signatures to put on the ballot a state legislator, such as DeSaunier, to wear such a sign? It applies only to those who petition to place an issue on the ballot. In professional politician terms, initiatives “go around the legislature,” bypassing the august solons.

This sort of sleight-of-hand is not new or unique. Politicians know they cannot outright abolish voter initiatives; they’d need voter approval. Instead, they claim to be “reforming” the process and promoting “transparency,” while they write the rules so that people are effectively discouraged and prevented from exercising their rights.

With all the problems Californians face, their erstwhile representatives are spending their precious time trying to force citizens to wear a message dictated by politicians — as if petitioning government were a permitted privilege, rather than an inalienable right.

DeSaulnier’s political move is deeply offensive. So are the ugly historical parallels. Don’t get me wrong: The legislators supporting SB 448 are not Nazis. Rather, they are petty and mean politicians, who lack even a modicum of respect for the constitutional rights of the Californians they are supposed to represent.