Back in the early 1990’s, I was a political science student and active in the student government at San Jose State University.  While there, I lived in a suburb of San Jose called Cupertino, whose largest employer was and still is today Apple Computer.  In fact, in order to pay my bills, I actually worked part time at Apple.  So, my interest was profoundly piqued when it was announced by Apple’s CEO Steve Jobs that the company he founded had been buying up swaths of property in Cupertino and announced plans to build a massive new campus with a new building that will have a larger footprint than the Pentagon, and serve as a home to over 12,000 employees.  The single, four-story circular building is shaped in a vast ring — that looks like a giant spaceship.  Check out this ABC news clip – pretty amazing stuff: 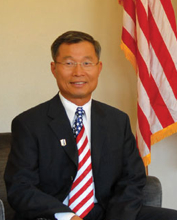 This news story shows clips from an extensive presentation by Jobs about the new Apple campus and building to a meeting of the Cupertino City Council a few weeks ago.  I decided I wanted to see the whole presentation — and a web search easily turned up a video of the whole thing (here).    Now I don’t expect FlashReport readers to watch Jobs and the City Council go on for over twenty minutes about “The Mother Ship” (the conceptual new headquarters already has a nickname).  That having been said, as a seasoned observer of politics, something caught my eye, and piqued my curiosity at the very end of Jobs’ presentation.  After a couple of the local Councilmembers praised Jobs after his presentation, one Councilman by the name of Barry Chang took the opportunity, instead, to run Jobs through the third degree about the rock quarry at the edge of the city (anyone from that area knows that there is a big rock quarry in the foothills above Cupertino).  Totally out of context, Chang asked Jobs if he knew about the quarry and about the fact that it was polluting the community.  The irony of this questioning from Chang was not lost on me.  Here Jobs’ is proposing to build what would be by far the largest building perhaps in the entire Bay Area — which will probably require record amounts of concrete — and Chang is riding him about the limestone quarry that produces the raw materials for what it turns out is well over two-thirds of the cement used in massive Santa Clara County (thank you Google, for allowing me to look up the obscure).

Check out the snippet of the Jobs presentation to the Cupertino City Council where Chang peppers the  Apple CEO with questions.  Clearly the guy has no sense of propriety and Jobs is taken off guard…

Chang’s questioning of jobs got written up by the local Patch website.

So I thought I would look into first-term Councilman Chang a little more.  It didn’t take much digging to find out that Chiang’s real full name is Chiao-Fu Chang, that he is a realtor, and that he is obsessed with trying to “take down” this rock quarry and its related kiln where the mined limestone is made into cement.  A peek at his campaign website’s main page shows his dedication to this singular cause.  In fact, there is an “issues” tab on his website that, when you click on it, takes you to a conspiracy theory page all about that quarry and kiln — and that’s it.  Chang brings new meaning to the phrase, “single issue driven.”

More web research reveals that Chang, who (and this is for real) used to design nuclear power plants for a living actually is on the board of an environment extremist group, which I believe he help found, called No Toxic Air, which is litigating against the quarry/kiln.  Apparently they would prefer that Apple’s new “Mother Ship” headquarters be constructed with bamboo sticks and masking tape. 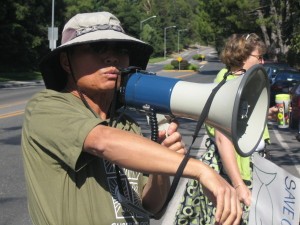 So I fired off some emails to ask some old friends who still live in the area what they knew about Chang, and what I got back was that this guy is a bit unhinged, a political opportunist who seeks out conflict and controversy.  Apparently his rather large, posh home sits just under the shadow of the quarry, and the read on him is that what started out as a NIMBY (not in my backyard) motivated angst towards the quarry quickly morphed into opportunism as Chang started to attract a small cult following.  The opportunism label is corroborated somewhat by the fact that Chang is a former Republican who re-registered to be a Democrat (trust me, in that area, these days, you cannot move up beyond possibly the City Council if you have an “R” next to your name).  Words used to describe Chang to me included, “Climber” – “Unstable” – “Extreme.”

Well, I didn’t really think much more about it (other than feeling bad for my old place of business, Apple, and my old city, Cupertino, for having this whack-job on the City Council) until an old friend I had asked about the guy sent me-mail that motivated me to go ahead and write this blog post.

Just last month, Jeffrey Smith who is the County Executive for Santa Clara County (the top staff member in the County, hired directly by the Board of Supervisors), send what could only be characterized as a scathing, scolding letter to Councilman Chang.  To be honest, in all my years in politics I have never seen such a letter.  I’ll quote a couple of excerpts but you can read the letter for yourself here or just click on the image below…

Apparently at one meeting, Smith accused a county staffer of lying… “The staff member reported that your tone and demeanor became hostile and threatening during his conversation with you after this meeting, when he attempted to address your concerns.”

At the other meeting, asserts Smith, Chang become, “…became confrontational and disruptive, and they advised [Chang] that they were prepared to call the Sheriff’s Office to maintain order.  During the meeting, you again accused County staff of lying to the public, and you told a County staff member that you would “come after him” if he failed to post your PowerPoint.”

Smith goes on to say, “Following this meeting, you confronted another County staff member, stood extremely close to him, shook your finger in his face, and told him that you would “come after him” if he ever threatened to call the Sheriff’s Office on him.

I spent nearly seven years of my life working in a senior position for the County of Orange, and I can tell you that this kind of letter, from a County Chief Executive to a local City Councilmember (and cc’d to the world) is unheard of.  It just doesn’t happen.

All of which is to say, again,  that I feel bad for the people in my old abode, Cupertino.  No doubt having this kind of gadfly on the city council, who can’t even help himself but to bring up his narrow agenda when Steve Jobs comes before him, is a major irritant.  Chang was elected in 2009 to a four-year term, and I am told wants to run for higher office. I’m willing to bet you that the citizens of Cupertino “retire” him in 2013 when he’s up for another term.  In the meantime, he’ll continue to use his office as a platform from which to be controversial, mean-spirited, and quixotic.

I’ll close by saying that if you have information or a story about Barry Chang that would be illuminating, please send it my way.