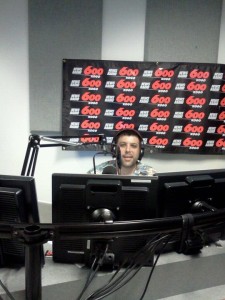 I have to admit to having been a bit nervous and distracted all week.  You see I was asked by popular conservative radio talk show host Roger Hedgecock (the former Mayor of San Diego) if I would be willing to guest-host a day of his program, as he would be on vacation.  Of course I agreed, but it was only a few days ago that I started to understand how much work goes on “off the air” in order to put on a great radio program for three hours.  That having been said, I think that we pulled it off.  And when I say we, it is not the “royal”” we — I want to thank longtime FR friend Jennifer Jacobs, who works with Hedgecock, and was very helpful (especially yesterday in studio) in keeping me sane.

The show is cut up into three segments — Hour 1, Hour 2, and Hour 3 — and was recorded yesterday from 3pm – 6pm and is now available for your listening pleasure, if you missed out on it live.  I will provide the direct links the the MP3 files below, but all of Roger’s shows are on iTunes, and also available on his own website, RogerHedgecock.com.

In the first hour of the show, which I dubbed the California Misery Hour, we had on two great guests.  The first was Jon Coupal, President of the Howard Jarvis Taxpayers Association, who spoke about the assault by unions on the initiative process in California.  After Coupal we then heard from Mike Capaldi, representing the Stop Special Interest Money Now initiative, which will appear on the June ballot.  You’ll want to learn more about this endeavor.

In the second hour, our first guest was conservative icon and Congressman from Northern California Tom McClintock.  Our talk ranged from the terrible debt ceiling deal recently enacted on Capitol Hill to the future of our Republic.  As always, Tom demonstrated in the interview why he is so well respected in the movement.  After McClintock, our guest was Steve Moore, a member of the Wall Street Journal Editorial Board.  Moore, an avid supply-sider, talked about President Obama’s failed economic record (including the need to repeal Obamacare), and what we need to do to turn back on the economic engine of our nation.

In our final our, which was all about empowerment, we had on two top notch guests.  The first was Michael Needham, the CEO of Heritage Action, which is the political arm of the Heritage Foundation.  Heritage Action recently released their latest Congressional Scorecard and we got to talk with him about how that was done, and some of the big winners and losers (by the way, kudos to U.S. Rep. Ed Royce for grabbing “most conservative in California” honors!).  The last guest of the show was longtime FR friend David Keating, who serves as Executive Director of the Club for Growth.  An amazing group that has a long track record of making the difference to elect many conservatives, the Club for Growth is  known as effective at both shining the light on the votes of politicians, and for the great White Papers detailing the economic policies of those seeking the Presidency.

All in all, it was a great time and I am so thankful to Roger for giving me the opportunity!