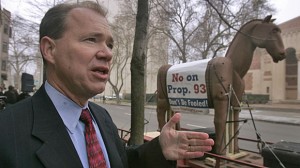 George Skelton of the infamous Times, today seems critical of the Howard Jarvis, Inc. headed by Jon Coupal. Gov Brown attempted a last ditch tax increase but couldn’t get any senate Republicans to come on board. Seems these republicans wanted Coupal’s ‘endorsement’—good idea.

The Gov met with Coupal and your wallet is safe. No deal. Couple simply could not justify a good reason for a tax increase.

Sadly, two assembly republicans broke from the conservatives and voted for the Brown tax. Said tax increase passed the assembly. That made Skelton happy. But Brown could not peel off any republican senators. That tax bill died—and properly so.
Congratulations to the senators, the folks at Jarvis and to Jon Coupal.