Lamenting The Absence Of Trust In Politics, Cogdill Should Look In A Mirror

Back in the year 2000, Texas Governor George W. Bush was elected as the 43rd President of the United States  on a platform of opposing higher taxes.  I remember that election season well as I was Executive Director of the California Republican Party at the time.  That same election cycle, popular Modesto City Councilman Dave Cogdill was running for the State Assembly in the Central Valley.  Cogdill campaigned as a conservative, proudly, publicly signing a pledge to oppose higher taxes in Sacramento.   He won his primary by a healthy margin, in a safe GOP seat. 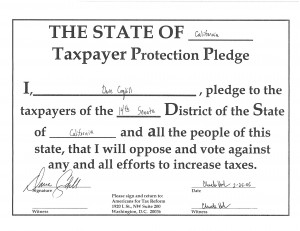 Six years later Cogdill ran in an uncontested race for a safe GOP State Senate seat, going on to easily win the general election against a token Democrat opponent.  Cogdill was able to advance into the State Senate without a primary fight because of the trust he had built up with his Republican constituents. Cogdill had pledged to oppose tax increases in the Assembly, and had kept that promise.  Very early in that State Senate campaign, on February 25, 2005 to be precise, Cogdill again signed a pledge to oppose higher taxes — and why should Republican voters have doubted him?  It was a matter of trust.  Cogdill gave his word, and in life and politics, that means something.

Of course, rather infamously, Cogdill, as Senate Republican Leader along with then Assembly Republican Leader Mike Villines (who had also pledged not to raise taxes) in February of 2009 cut a deal with State Capitol liberals that was the ultimate violation of the trust of the voters that put them there — they were co-architects of a budget deal that contained as its center-piece the largest tax increase in the history of any state.  As a result of their breach of trust, Californians paid over $30 billion in increased income, sales and car taxes over a two year period.  While voters overwhelmingly rejected another part of the deal to extend those taxes for two more years, the damage was done.  You can read more about this in an oped that I penned in the Fresno Bee in April of 2009.

Cogdill’s broad violation of trust was between he and his constituents.  But in a more intimate setting was the violation between a leader and his caucus.  It is now the stuff of political legend about how Cogdill came to his fellow Republican Senators after spending lengthy hours in private “Big 5” negotiations, and returned announcing that he had negotiated a deal which included massive tax increases.  Within hours, Cogdill was rather abruptly removed from his leadership post by his fellow Republicans — primarily for a violation of trust.

So it is with all of this background in mind that I found it rather incredulous this morning that now Stanislaus County Tax Assessor Dave Cogdill has an op ed in the Sacramento Bee entitled, Trust Is Essential For Political Compromise.  In the piece, Cogdill is lamenting that deals made in the Capitol on the strength of a handshake — on trust — are not kept.  Keeping your word is important in life and in politics.  It’s just that coming from someone with a track record of serially breaking his word, this rings hallow.  This is someone who violated the trust of his own voters, and his own colleagues, to negotiate a bad budget deal that punished taxpayers for years of overspending by state government politicians.  The point that Cogdill is trying to make in the piece is a valid one — promises made should be kept.  But Cogdill making the point seems to me the height of hypocrisy. 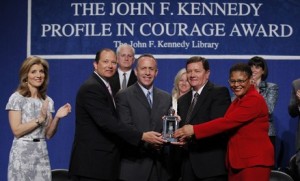 Senators Cogdill with other legislative leaders being presented the "JFK Profile In Courage Award" for their budget deal.

It is worthy of note that in an era when politicians cling to their tenure in the legislature more tightly than my one year old daughter holds on to her favorite toy, Cogdill declined to run for an allowable second term in the State Senate, retreating to a run for an obscure county level post.  No doubt the impending consequences of his own breach of trust helped to guide that decision.

Perhaps someday, Cogdill will be repentant about what he did, rather than being celebratory.  But until then, it is not so easy to forgive him or absolve him for his actions.  Cogdill thinks of his vote as courageous.  Hardly.

* Note – This column has been revised.  The original version incorrectly attributed a quote to Senator Jean Fuller when the quote was that of candidate Heidi Fuller.

One Response to “Lamenting The Absence Of Trust In Politics, Cogdill Should Look In A Mirror”