Today, according to the Sacramento Bee,  the California High Speed Rail Authority will formally announce that the estimated cost to construct a HSR system in California was not the already outrageous $43 billion that had previously been publicly stated by the Authority — instead a new report will show that the costs are $98.5 million — over twice the original amount! 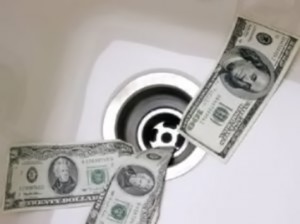 If you need a reminder about why moving forward with this project is a bad idea, let me draw your attention to an opinion piece that ran earlier this year in the Washington Post (the Post is not exactly a repository for right-wing thought, I might add).

Back in 2008, when the measure to approve the $9 billion borrowing measure for HSR was on the ballot, the Reason Foundation released a study in which they made it clear that the cost estimates being used by proponents of a HSR system were way too low.  Ironically, though, even Reason was too conservative in its estimates of costs  — “With the high costs of building in California and the history of cost overruns on rail projects, the final price tag for the complete high-speed rail system will actually be $65 to $81 billion…”

California voters barely approved massive bonded indebtedness back in 2008 — the vote was 52.7% to 47.3%.  And, of course, the 2008 election was right before the nation would slide into a pretty steep recession.  I have no doubt that even if the original projections for the cost of a HSR system hadn’t changed, that a 2012 vote to authorize $9 billion in bonds to help finance the project would be defeated by the voters.  But with the news today of the massively increased costs, I think such a measure would go down in a landslide.

That having been said, I don’t think we should have to wonder what the voters would do — instead, I think that we should actually ask them.  The California legislature should actually place a repeal of the bonds on the ballot for next year, and let the voters stick a fork in this terrible public policy endeavor that we simply cannot afford.