As columns go, this will be one will be fairly short — and very direct.  Until now, the Presidential candidacy of former House Speaker Newt Gingrich has been more of a sideshow than anything serious.  Actually, his performances in the never-ending stream of debates have been downright enjoyable.  Now the latest national poll of ever-shifting sentiments of Republican voters on who Republicans want as their Presidential nominee has Gingrich on top with 28% support.

Because Gingrich has catapulted into the fore, let me make it very clear that I cannot and will not support his candidacy for the Republican nomination because there is no way for me to be convinced that Gingrich is of sufficient moral character to hold the highest elective office in the United States.  Because of this, there really is no reason to assess his candidacy on any other level.  The policies and politics of a candidate do not matter if one cannot trust them. 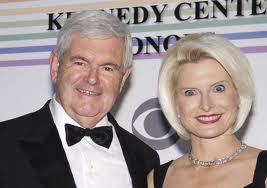 Newt Gingrich with his third wife, Callista, with whom he had an affair while still married to his second wife

Gingrich has been married three times. In 1962, he married Jackie Battley, his former high school geometry teacher, when he was 19 years old and she was 26.  In the spring of 1980, Gingrich left Battley after having an affair with Marianne Ginther. In 1984, Battley told the Washington Post that the divorce was a “complete surprise” to her. According to Battley, in September 1980, Gingrich and their children visited her while she was in the hospital, recovering from surgery, and Gingrich wanted to discuss the terms of their divorce.  Gingrich has disputed that account. In 2011, their daughter, Jackie Gingrich Cushman, said that it was her mother who requested the divorce, that it happened prior to the hospital stay (which was for the removal of a benign tumor, not cancer), and that Gingrich’s visit was for the purpose of bringing the couple’s children to see their mother, not to discuss the divorce.  Gingrich has two daughters from his first marriage. Kathy Gingrich Lubbers is president of Gingrich Communications, and Jackie Gingrich Cushman is an author, conservative columnist, and political commentator whose books include 5 Principles for a Successful Life, co-authored with Newt Gingrich.

Six months after the divorce from Battley was final, Gingrich wed Marianne Ginther in 1981.In the mid-1990s, Gingrich began an affair with House of Representatives staffer Callista Bisek, who is 23 years his junior. They continued their affair during the Lewinsky scandal, when Gingrich became a leader of the Republican investigation of President Clinton for perjury and obstruction of justice in connection with his alleged affairs. In 2000, Gingrich married Bisek shortly after his divorce from second wife Ginther. He and Callista currently live in McLean, Virginia. In a 2011 interview with David Brody of the Christian Broadcasting Network Gingrich addressed his past infidelities by saying, “There’s no question at times in my life, partially driven by how passionately I felt about this country, that I worked too hard and things happened in my life that were not appropriate.”

In short, not once but twice Gingrich has demonstrated extremely poor judgement and an ability to violate word and vow.  Maybe Gingrich, who is said to have repented for his actions (I friends who have been with him when he has spoken about this issue and Gingrich is apparently quite heartfelt in acknowledging his shortcomings and asking for forgiveness), has changed and is no longer that person who could make those very poor major decisions in his life.  But who is really to know?  And the problem for Gingrich (and for the rest of us) is that the Presidency of the United States is too important of an office to take the chance of putting someone into it who has a flawed moral character.  The decisions that are made in that office are too important, and the power of the office to great, to take that kind of risk — in my opinion.

It is worthy of note, by the way, that this is a proverbial “elephant in the room” (pardon the pun) and I often hear this issue talked about by GOP activists who dismiss the Gingrich candidacy because of it.

It is my hope that as candidates have been ascending and descending in the polls, that Gingrich’s support will drop and this will be a non-issue.  While I don’t think he should be elected President (or Vice-President), I think that Gingrich has a lot of talent that he can bring to the table.  He’s a tremendous idea-guy, and while his record as Speaker is far from spotless — he is an asset to the Grand Old Party, with talents that can and should be tapped.

I will close by saying that it is always difficult when personal issues such as those in Newt Gingrich’s life become a part of the public debate.  There are some who say that such things should not be addressed — that they are “private” and have no place in the public square.  To those people I would say that when judging the candidacy of someone seeking an office of public trust, this all fair game.  In fact we should all strive to find out everything we can about a candidate’s character — because it matters — a lot.  It certainly does to me — and to a lot of other Republican voters.