The country is in a recession.  California has been hit particularly hard, with our situation being exacerbated by the poor housing market, and also being that we are the home to significant areas of wealth creation, such as the Silicon Valley.  The poor economy has been very difficult for people.  Many that had jobs now find themselves unemployed, and a good number of those still employed have had to suffer pay reductions or cut-backs in hours.  The worsening of the economy has necessarily led to a significant reduction in tax revenues to state and local governments.  If people are making less money, they are paying less in taxes – and if you aren’t making money at all, chances are you are not only paying no taxes, but are actually taking a government subsidy of some sort.

It is not rocket science to figure out that the number one priority for everyone should be economic recovery.  When our economy is humming along once again, it will mean an increase in everyone’s standard of living – and it will also increase tax revenues to governments.  The bad news for the liberals running the State of California is that the two things that state government can do to help the most towards economic recovery are things that liberals simply don’t like to do.  The first is to stop doing new bad things that inhibit or retard private sector growth and job creation – this would include higher taxes, increased borrowing, and increasing the regulatory burden.  The second step would be to actually proactively reduce taxes and cut regulations.

Republicans legislators in Sacramento get the credit for seeing that state government taxes did not go up, and in fact the end of temporary taxes saw, for all intents, tax cuts take place.  Of course this victory by the GOP was more than soured with the hundreds of bad bills signed by the Governor that amount to a “death by 1000 cuts” style assault on private sector wealth/job creation in the once-Golden State.

The road map so clear – improve the economy and, as the saying goes, the rising tide will lift all of the boats – private and public sector.

That said, it seems that every day now we are reading another story about yet another ballot initiative being funded by some parochial interest that wants to convince Californians to raise taxes during a recession –to “do harm” and to hurt our economic recovery.  “Think Long” “Munger” “CTA” “Governor Brown” – all have grand ideas to shift billions of dollars out of the state’s economy and into government coffers through fantastically huge tax increases.

I was alerted to the latest self-defeating tax increase initiative to be submitted to the Attorney General’s office through an email from Jon Coupal, President of the Howard Jarvis Taxpayers Association – this proposal would enact what is called a “split roll” which would in essence repeal Proposition 13’s property tax limitations for non-residential property.  The net effect of this would be a massive tax increase, collected through significant increases in property taxes, to businesses all around the state.

In his email, Coupal told me, “This latest attempt at a massive tax increase is unlikely to gain traction.  As the Field Poll recently made clear, Prop. 13 remains remarkably popular and there is simply no way the proponents can sell this as anything but a repeal of 13 as it relates to business properties.”

It doesn’t take a genius to figure out that if you increase the cost of doing business in California, it means that at best fewer people get hired – and more likely this causes businesses that are barely scraping by to actually let people go.  We would not only be creating a new barrier to entry for new businesses, but we would be hitting existing California businesses with massive tax hikes – which is literally the opposite of what we need to have happen.

I’m reminded of the story of the scorpion and the frog.  A scorpion needs help crossing a stream.  So he asks a frog if he will carry him across on his back.  The frog responds by saying, “Why would I do that?  If I put you on my back, you will sting me, and I will die.” 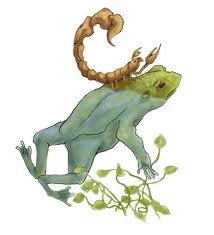 The scorpion answers by saying, “Why would I do that?  If I sting you, you will die and since I can’t swim, I will die with you.”

This made sense to the frog.  So he took the scorpion on his back, and started across the stream.  About half way across, the scorpion stung the frog.  As he was dying, the frog exclaimed, “But why did you sting me?  Now we both are going to die!”

The scorpion’s response was succinct.  “I am a scorpion, and that’s what scorpions do…”

So when you see liberals in California hyperventilating over the chance to raise taxes in the midst of a recession, you just have to remember that liberals just want to raise taxes – that’s just what they do.