Walters Ingnores The Obvious: The Pendulum Has Swung Far To The Left

Last week, long-time Sacramento Bee columnist penned a column Both Left And Right In California Want Automatons In Office where he throws down the gauntlet of criticism on those who oppose a bigger, fatter state government (he also throws down on the other extreme, but that is not the focus of this blog post).

The California Republican Party has been frequently – and rightfully – criticized for insisting that GOP politicians adhere to a very narrow set of supposed principles, such as always opposing any purported tax increase regardless of its merits.

That rigid mindset entertains no differences between a general sales tax increase, an increase in a specific user tax such as the one on gasoline or even closing a completely unjustified special interest tax loophole, and shuns the tax reform that California sorely needs.

It’s not only a mindless posture, but makes Republican officeholders nonparticipants in the budgetary process. And the party applies the same political myopia to other issues as well, thus contributing to the state’s chronic governmental dysfunction. 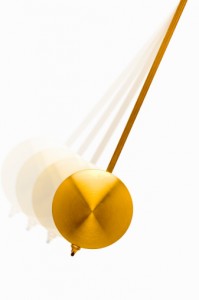 Let me first say that I enjoy reading Dan’s columns.  He is a very centrist guy, and in a town where the politics is dominated by the whacked-out left, it means that more often than not I find myself agreeing with Dan’s observations about what happens in the State Capitol.  But every once in a while Dan will slam conservatives, like he did above, because as a moderate, he is less defined by ideology and more so by finding the intersection between two points and assuming that this is where reasonable policy-making should be at that focal point.
Dan points a picture in his column of some sort of epic battle between the right and the left, with both sides winning a battle here or there.  But that is hardly the case.  The pendulum of public policy in California has swung so far to the left in terms of tax policy, regulatory policy, environmental extremism, and more that Republicans are left with no choice but to band together and try, through unity, to keep the left from scoring more touchdowns (that is all we can really do since the political situation has our defense always on the field, sitting at our own 10 yard line).

I suspect that if the pendulum were to swing back more towards the middle, that you would see a lot more diversity of opinion amongst GOP legislators on a myriad of issues.  But right now it is so bad that it is clear that any kind of “deals” cause us to lose field position.  And the problem is that every time the Democrats score a touchdown, or a field goal, it means higher taxes, or more borrowing, or increased spending, or more regulations.  All of these things are bad news for California and her residents.

In closing, I do not think it was fair of Dan to call into question the authenticity of the belief by Republicans that state government is too big and spends too much, as exhibited by an opposition to raising revenues through new taxes or raising tax rates.  What Walters refers to as “supposed” principles are very real, and very heartfelt.

5 Responses to “Walters Ingnores The Obvious: The Pendulum Has Swung Far To The Left”