Since the FlashReport is a website devoted to California politics, it is not as frequent that I write about political races in other states. But there is a Republican Congressional primary taking place in Central Florida that is so important that is worth my time to write about it, and for you to take a few minutes to read about it. But before I delve into that race, let me start with a brief introduction.

It is important to remember that conservatives in America are in the middle of two great battles, both of which must be won if we are to achieve our goals of a truly limited role for the federal government, and restoring greater freedom and liberty back to the people of this great nation. The first battle, the more obvious one, is against liberal Democrats. This manifests itself in the candidacy of Mitt Romney against Barack Obama, and also in a cluster of U.S. Senate seats that are competitive in November, in which Republicans must win enough seats to take a majority in the upper chamber. Of course we need to maintain a Republican majority in the House.

We are reminded, however, that simply running a Republican “trifecta” of the Presidency, and control of both the U.S. Senate and House are simply not good enough. After all, partisan control is not the end — but rather a means to an end. As we painfully saw last decade, when the GOP “had it all” — we managed to not only fail at shrinking the size and scope of government, but actually managed to increase it’s size (albeit at a slower pace than would have the Democrats). So the battle is within the GOP itself, to see that in the end pro-growth conservative Republicans are dominant in both the Senate and House Republican Conferences. It’s really important, because I will tell you that there is a great divide amongst Republicans in Washington, D.C., between those who see who controls government as the issue, rather than the actual growth in the size of the government.

U.S. Reps. John Mica and Sandy Adams are locked in a battle for the soul of the GOP.

It is with this two-front battle in mind that I want to talk about a key Republican primary taking place in Florida’s 7th District (centered around Orlando). Here, thanks to redistricting, you have Congressman John Mica, a twenty-year incumbent, locked in a battle with freshman Congresswoman Sandy Adams. The former, Mica, is a poster child for big spending Republicans, and the latter is a strong fiscal conservative who rejects crony capitalism and massive spending. Mica is currently the Chairman of the powerful House Committee on Transportation, from which he lords over levels of profligate spending that truly would make your eyes bulge.

JOHN MICA – BIG GOVERNMENT REPUBLICAN
Let me walk you though just some of the egregious activities of Congressman Mica, in an effort to paint a picture as to why you want him retired, and no longer in the House.

Until the House instituted its temporary ban on earmarks, Mica was one of the biggest abusers of this system, requesting over $4 billion (yes, with a “b”) in earmarks over the course of his career (this includes a $13 million earmark for a client of his daughter, who is a lobbyist). Back in 2008 when the earmark ban was starting to be considered, Mica told the Orlando Sentinel, “There’s no way in hell I’d support banning earmarks.”

As Republicans have been fighting against high speed rail boondoggles here in California as well as around the country, Mica has been, to use his own words, the “best cheerleader” for HSR in Florida. He even boasted about this to President Obama.

Mica spearheaded the effort to mark-up and pass a transportation bill that spends considerably more than the income from gas taxes, thus drawing against funds better spent elsewhere, or returned to the people through lower taxes. Fear not, however, as Mica has a solution to the problem, with his proposal to impose a new mileage-based highway tax, which would tax motorists by how far they drive. 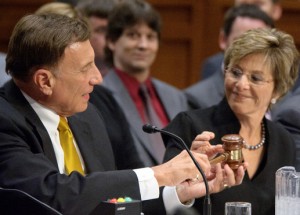 If all of this isn’t enough, you should click through to this story to see how Mica seriously ways to spent $270,000,000.00 of your tax dollars on fine art. Seriously.

Finally, of special note to those of us here in California, is Mica’s recent reference to one of our U.S. Senators, Barbara Boxer, as his “soul mate” — which I am not making up. You can read about it here, and check out the video below. You’ll want to go to the 2:35 mark on the video and see it for your self. Unbelievable but true.

SANDY ADAMS – TAXPAYER ADVOCATE
Boy you can sure draw a sharp contrast between John Mica and his opponent, former Deputy Sheriff Sandy Adams. In just one term in the House, she’s been working hard to reduce federal spending. She has been one of the leaders in Congress to permanently ban earmarks, helping to organize nearly 60 conservatives in Congress calling for the ban. Congressman Mica, of course, would not sign it.

And on another key issue that is near and dear to me as a blogger, Adams has been a strong advocate for cracking down on a new dangerous way in which outspoken conservatives are being harassed — called SWATing. This is where someone fakes a 9-1-1 call to the home address of a blogger, and gives a false report of a dangerous situation so that local law enforcement arrives en masse. Adams and a number of colleagues called on Attorney General Holder to look into these incidents, Mica, again, was MIA. Sarah Rumpf penned more on this issue here.

On a conference call for bloggers yesterday afternoon Congresswoman Adams said, “This race is for the heart and soul of the Republican Party.”

Congresswoman, we could not agree with you more. This truly is a race that while far from where we live, will impact the shape, focus, and directions of Republicans in Washington, D.C., for years to come.

I would commend anyone reading this to go over to www.sandyadams.com and get involved, whether through volunteering or donating funds. You can be sure that all of the special interests that love Mica’s big spending ways will themselves be spending a lot of money — to keep him in Congress!