Shame On John Burton For His Insensitive Remarks 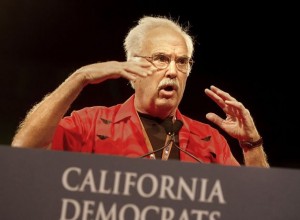 We have all “rolled our eyes” at some of the statements over the years by John Burton, the former California Senate President Pro-Tempore who is currently the long-time-serving State Chairman of the California Democrat Party.  The former San Francisco legislator is so  prone to say inane and provocative things that I have had reporters tell me that it’s always entertaining to interview him because, well, you just never know if he is going to step in it again.

Of course by now, most people have heard about latest inappropriate comment made by Burton, for which the word “inappropriate” may be the understatement of the century.  Burton is, of course, back in Charlotte, North Carolina where he is heading up the California delegation to the Democratic National Convention.  He gave an interview to CBS radio’s Doug Sovern that was rude, disrespectful, and so incendiary that it made the Drudge Report, and dozens of news stories, and ultimately had even President Obama’s campaign distancing themselves from it.  John Burton compared the Republicans, and Congressman Paul Ryan in particular, to infamous Nazi Joseph Goebbels, who served in Adolph Hitler’s inner-circle and was responsible for the Third Reich’s rhetorical attack on the Jews, and certainly was a key player in the Holocaust.  Below is embedded the TV news coverage from CBS in San Francisco. You can see and hear Sovern’s original post on the interview here.

It’s worth noting that ace-Chronicle reporter Joe Garofoli was quick to pen his piece on the interview, which you can read here.   Garofoli actually got the piece out first, but it no time word of Burton’s outrageous and insulting comments had traveled far and wide.  I’m sure there was some sort of “spin” that was supposed to come out of the DNC convention yesterday, but you can be certain that Burton pretty much eclipsed whatever that was supposed to be.

Speaking for myself I was incensed when I heard about the comments, which thanks to Twitter was almost immediate.  As a Jewish Republican, I think I had a case of being, “exponentially offended.”  (It is particularly nauseating to me that a story about this is actually in the Jerusalem Post — what our Jewish friends there must think!)

From listening to the interview, Burton trying, I think, to say that he thinks that Congressman Ryan is a liar, and that he is just saying what he will with no regard to the truth.  If that was the case, maybe an old-fashioned Pinnochio reference might have been the way to go.  If your knowledge of World War II history is not in-depth when it comes to Goebbels, you can read more about Hitler’s Minister of Propaganda here.  But to give you a flavor of the kinds of things that Goebbels would say, I will reprint a section of his infamous, “The Jews Are Guilty” speech delivered just weeks before the Japanese raid on Pearl Harbor… 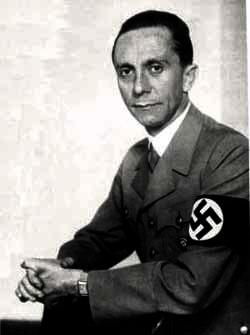 Joseph Goebbels of the Third Reich

Therefore, we must say again and yet again:

1. The Jews are our destruction. They started this war and direct it. They want to destroy the German Reich and our people. This plan must be blocked.

2. There are no distinctions between Jews. Each Jew is a sworn enemy of the German people. If he does not make his hostility plain, it is only from cowardice and slyness, not because he loves us.

3. The Jews are to blame for each German soldier who falls in this war. They have him on their conscience, and must also pay for it.

4. If someone wears the Jewish star, he is an enemy of the people. Anyone who deals with him is the same as a Jew and must be treated accordingly. He earns the contempt of the entire people, for he is a craven coward who leaves them in the lurch to stand by the enemy.

5. The Jews enjoy the protection of our enemies. That is all the proof we need to show how harmful they are for our people.

6. The Jews are the enemy’s agents among us. He who stands by them aids the enemy.

7. The Jews have no right to claim equality with us. If they wish to speak on the streets, in lines outside shops or in public transportation, they should be ignored, not only because their are simply wrong, but because they are Jews who have no right to a voice in the community.

8. If the Jews appeal to your sentimentality, realize that they are hoping for your forgetfulness, and let them know that you see through them and hold them in contempt.

9. A decent enemy will deserve our generosity after we have won. The Jew however is not a decent enemy, though he tries to seem so.

10. The Jews are responsible for the war. The treatment they receive from us is hardly unjust. They have deserved it all.

It is the job of the government to deal with them. No one has the right to act on his own, but each has the duty to support the state’s measures against the Jews, to defend them with others, and to avoid being misled by any Jewish tricks.

The security of the state requires that of us all.

The point here is that Joseph Goebbels was an evil person, who in fact was arguably Adoph Hitler’s closest confidant.  If his knowledge of and role in the extermination of millions of Jews was not an indicator of this man’s dark, twisted mind — you can add to it that nearby to where Hitler took his own life, Goebbels took his wife’s and his own life, but not before poisoning to death all six of his own children.

As a Jew who grew up on the Westside of Los Angeles, I had more than one field trip to the Simon Weisenthal Center, a dark memorial to the Holocaust, where you hear about infamous mass-murderers like Goebbels.  You have nightmares about them.  Heck, my teeth are gritted now, just as I write this column.

I thought that the swift, public response by Matthew Brooks, Executive Director of the Republican Jewish Coalition, was spot on…  “John Burton out to know better than to bring the Nazis and their victims into our current political debates, but apparently the offense such remarks cause to Holocaust survivors and their families are of less concern to him than the prospect of partisan gain.”

His comments evoked similar reactions from many others, including a public distancing by President Obama’s re-election campaign.  You can tell that the “heat” got to Burton because he finally issued an apology of sorts… But even that wasn’t a full-throated retraction of what he had said.  Instead he put out a brief statement saying, “To correct press reports of my recent comments about Republican lies, I did not call Republicans Nazis nor would I ever.  In fact, I didn’t use the word.  If Mitt Romney, Paul Ryan, or the Republicans are insulted by my describing their campaign tactic as a the big lie – I most humbly apologize to them or anyone who might have been offended by that comment.”

It is clear from this statement that there is no contrition on the part of Burton.  He’s not sorry for what he said.  He’s half-heartedly sorry to anyone who might have taken offense to what he said.

I am not a Democrat, but if I were, I would be calling for Burton’s resignation as head of the California Democrat Party.  How anyone that insensitive can get away with that kind of outrage is beyond me.

Oh, but in case you were wondering about his state of mind, subsequent to the comments, the international reaction, and his fake-apology, here is a follow-up comment he made on Twitter.

And on a closing note…  A special “thank you” to Rep. Nancy Pelosi, for putting Burton in his place (not!)…

[Update: 645am — Burton has apparently flown home from Charlotte for a “pre-scheduled root canal” procedure.  I’m sure.]

[It was notable that when you do a Google images search for Joseph Goebbels, you get a lot of photos of Goebbels, a shot of Adolph Hitler, and now one of John Burton — See below.] 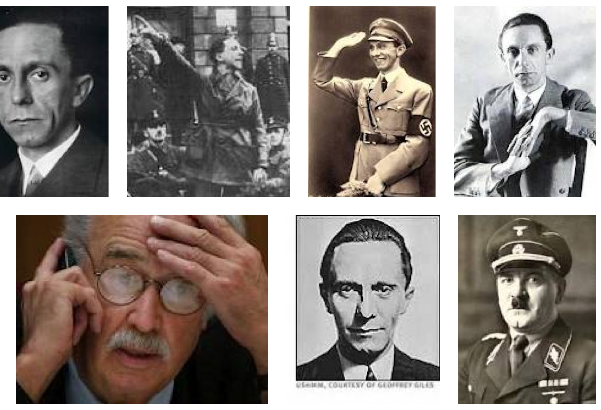