DeMaio Finds His Groove, and the U-T’s Radio Problem 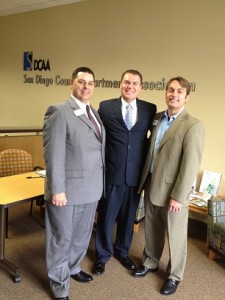 At a fundraiser for Carl DeMaio on Wednesday I heard the mayoral candidate make some points I hadn’t heard him make before.

Speaking to members of the San Diego County Apartment Association, for whom I am privileged to do some work, Councilman DeMaio said someday he would like to write a book about how he helped turn San Diego around, and the positive affect government reform has had on local neighborhoods. He said he wants to tour the world to discuss his book.

He said he would not have a Chief Operating Officer as mayor. Instead, he said, he would appoint a handful of deputy mayors. The Republican councilman and fiscal hawk also said there would be some Democrats at high levels in his administration.

The latest polling shows he and Congressman Bob Filner in a statistical dead heat, DeMaio said. It also shows, he said, that if he’s able to share his primary messages with voters he wins. That’s easier said than done. He said he needs hundreds of thousands of dollars over the next six weeks for advertising.

The more I hear Carl speak the more impressed I am. His cadence is smooth. His approach — conversational and inclusive — is appealing. His suits are tailored. His ties are new. His hair is cut. Carl has found his groove.

Two San Diego publications not owned by Doug Manchester took shots at him this week.

Manchester, owner of U-T San Diego, announced this week he’s buying the North County Times. It means he now owns the two largest papers in San Diego County. My guess is he merges the papers, but that’s not what Voice of San Diego‘s Scott Lewis wrote about.

“He’s a fan of big government as long as it is based on religious authoritarianism, provides for private enrichment off public assets and spends what’s left on unquestioned militarism,” Lewis writes.

Over at San Diego CityBeat, an alternative weekly, the criticism was harsher.

“The editorial (recently published in the U-T) attempts to paint a picture of the country after another four years under the leadership of Barack Obama: It’s a hair-raising, spine-tingling tour into a practically apocalyptic future. And it reads as if written by a not-too-sharp Young Republican college freshman getting his first shot at a commentary in the school paper,” CityBeat’s editorial reads.

National media blogger Jim Romenesko also notes the U-T is concerned that if Obama is re-elected gas prices would soar, taxpayers could end up paying for late-term abortions and  ‘In God we Trust’ could be removed from U.S. currency.

Manchester and John Lynch, the paper’s CEO, are proud of their conservative beliefs, and they’re not shy about saying so. They’re also new to the newspaper game and have infused talk radio into their most controversial editorials. This could be Lynch’s influence more than Manchester. Lynch is a former radio executive. I don’t think either of them want the U-T to become a niche publication that only attracts readers and advertisers on the far right, which is why I think they eventually will decide to leave radio out of the newspaper.