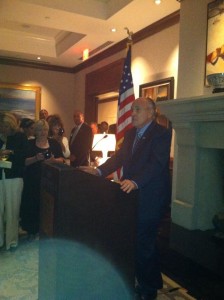 Pundits routinely write off California as a helplessly blue state, but the fact remains that there are still many vitally important races in the state.  The decennial redistricting that took place last year created several new and very competitive districts throughout the state, and the GOP has a great shot at picking up new legislative seats that were previously gerrymandered exclusively to Democrats, and of course the Mayor’s race in San Diego remains a focus of many throughout the state.  The need to rebuild an ailing party in California starts with one thing: Money.

Democrats have had an advantage in California for decades due to the massive amounts of money that government unions can extract from employee paychecks and is later funneled into their operation. The California Republican Party is now poised ready to go back on offense and reclaim some of the newly drawn legislative districts.  To get these operations going CRP Vice Chairman Steve Baric recruited America’s Mayor Rudy Giuliani to come raise funds for the party operation.  Professional fundraiser Jenniffer Rodriguez and Baric put together an exciting event at the Pacific Club in Newport Beach last night that brought in over $100,000 for party operations.  The event showed that donors and party faithful are serious and ready to turn the state back around one step at a time.  Rudy brought that spark to life with him comments.

Giuliani of course ran for President in 2008 and declined to do so this cycle.  He spoke highly of Governor Romney and of course of his disappointment in President Obama.  In his blunt yet engaging New York style Rudy put Obama’s failures in plain terms, and highlighted the administration’s poor response to the recent terrorist attacks aimed at Americans in the Middle East.  When asked about Governor Romney, Rudy’s advice was short and sweet: “Be yourself.”

With about a month and a half left to Election Day there is much work to be done by candidates, campaign staffers and volunteers.  California Republicans remain focused on the priorities of bringing the party back on offense, and Rudy Giuliani’s encouragement flamed that spark a bit last night.