As the new legislative session began Monday, there was a quite buzz in the Assembly. But it wasn’t just about the many new lawmakers. A rumor was going around that Democratic Assembly Speaker John Perez had ordered the Capitol Sergeants to prevent reporters from accessing Assembly members in chambers. 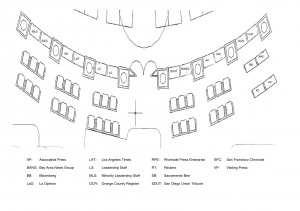 Then I saw one longtime reporter standing near the entrance to the Assembly floor, where reporters position themselves if they are waiting to speak to a lawmaker. But the Sergeant told the reporter that he could not speak to lawmakers.

“News reporters will be barred from interviewing legislators in the Assembly chambers under new rules ordered by Speaker John A. Pérez before Monday’s first session of 2013,” Jim Sanders of the Sacramento Bee reported. The prohibition is among several rule changes imposed by Pérez that restrict press movement within chambers during floor sessions and tighten access to legislators immediately afterward.”

I’ve already experienced this. At the end of the last session, while seated at the “visiting press” news desk in the dark corner of the Assembly Chambers, several Assembly members walked back at different times to speak with me during contentious floor debates. As one Assemblyman and I spoke quietly, a Sergeant asked us to step outside. He looked apologetic when he made the request, but it was apparent that he had his orders.

Speaker John Perez had been doing battle with Republican legislators day after day during the final weeks of the session, leaving him visibly irascible. He yelled at Republicans who dared to challenge him, and several times banged so hard on the dais with the gavel, I thought it would shatter.

All of this apparently led up to limiting press access to the legislators, who had spoken openly about what was going on during the debates, and behind the scenes. I think Perez had had enough, and it was one way to limit information getting out.

Since the end of the last session, I was told by a Democratic strategist that Perez hates the media. He apparently despises reporters. Access to his office is difficult and contentious. For the three years I have been reporting from the Capitol for CalWatchdog, I have never received a press release or official statement from Perez’s office, yet they insist that I am on the media list.

Last January on the first day of session when the Legislature returned from its holiday break, I entered the Assembly Chambers and walked to the media desk I had been using for the last two years. As I sat down, a representative from Perez’s office informed me that I was not longer allowed to use the desk, and she escorted me to the opposite corner to the “visiting press” desk.

I can do my job from any seat but this was petty… especially since nearly all of the desks between the “visiting press” desk in the corner and the the desk I had been using up front, sit empty most days. I am one of only a few reporters who cover the Assembly from inside of the chambers every day that it is in session.

With a Democratic supermajority in both houses of the Legislature, and a Democratic governor, I expect to see more rules like this in the coming months. But, there are also more moderate Democrats in the Assembly. This should be a very interesting session.