Los Angeles County property owners are beginning to rise up against a proposed “Clean Water, Clean Beaches” tax that every property owner would pay annually. The Los Angeles County Flood Control District proposes the money go to all kinds of projects AND gives a portion to cash strapped cities on an ongoing basis unless terminated by the Board of Supervisors.  There is a hearing  today to decide if a ballot should be mailed to property owners.

Opposition to the tax has come from an unlikely source.

The proposed tax would cost schools money. While the idea of tax money going to schools to pay taxes to the county is a completely different discussion, school districts control a lot of property and as such wield a lot of voting power.

The County did find a solution.

Not the kind that would land you in jail, but government bribery the kind committed in order to get votes to take others people money. In a draft proposa,l K-12 schools would get ALL the money back. No word about colleges. Then again no college board has opposed the tax yet. It can be spent on teachers, extracurricular activities, capital costs etc.. But wait, there is more! If School districts stop opposing the tax and support it they may be eligible to get a little more than 100% back depending on the type of capital projects. At least that is the implication

That is the catch: the money has to go to promoting and propagandizing the work of the LA County Flood Control District. Yes, the debate is over about local control. You can have Departments of Education run by the central government in DC, the state government in California and now the all-mighty Department of Education at the LA County Flood Control District.

Will school districts be bought off and leave regular property owners all in the sewer? Stay tuned…. 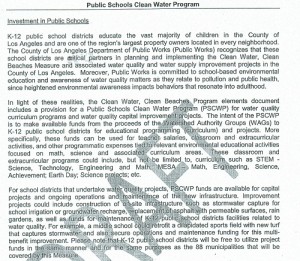