Did you know that the California legislature is looking to erode the quality of everyone’s access to healthcare, in their rush to implement Obamacare?  Read on…

For some people, realizing that it’s already been three years since President Obama went before the American people to announce that health care reform in the United States was no longer “an unmet promise” but rather had become the “law of the land,” may cause them to wonder where the time has gone.

For others, like those who have truly been paying attention, however, a better question might be whether the Obama’s promise was one we ever really wanted to see fulfilled in the first place. 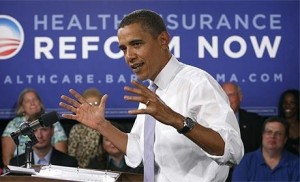 Did the President talk about redefining doctors when he pitched Obamacare?

The reason for such a question has to do with the fact that, three years after the bill was signed into law, the American public is only now beginning to understand the wide array of unintended consequences that this misguided reform effort will have on our nation’s health care industry.

One of the most alarming consequences currently playing out here in California and was born from a glaring misunderstanding of health care policy present in the Obamacare legislation: that expanding “access to coverage” will somehow expand “access to care.”

Back in 2010, when the Obamacare legislation was being debated, President Obama and the Democrats in Congress drew upon countless stories of Americans who were unable to receive medical attention because they didn’t have, or couldn’t afford, health insurance. The solution, supporters reasoned, was to expand coverage to all, either through entitlement programs such as Medicaid, or through federally subsidized plans offered through “health benefit exchanges” operated in each state.

As is so often the case, big government solutions end up creating big problems.  The President and Congressional Democrats equated “access to coverage” with “access to care,” an errant distinction which now presents one of the greatest dangers present within the reform legislation.

What supporters of the bill are now finding is that when Obamacare is fully implemented in January 2014, more than 32 million currently uninsured Americans, roughly 5 million of which will be coming from California, will gain health insurance in the first years following the rollout.

Herein lays the problem: Obamacare can mandate that everyone be giving healthcare coverage, but how does that translate to access to care?  And how does this mandate effect everyone, including those who already have coverage?

The answer: It’s not pretty.

Currently 42 of California’s 58 counties lack a sufficient supply of physicians to meet the levels being recommended by federal government with regard to Obamacare. In many areas of California, there aren’t enough doctors to adequately serve the present population, let alone a population that includes millions of newly insured residents. In other words, Obamacare does nothing to address the problem “access to care,” and in reality, makes an already existing problem worse.

This, however, isn’t even the worst of it.

In order to deal with this now-compounded problem, Democrats in the state Legislature are proposing a solution that places access to care over patient safety, and as a result, will mean diminished medical care for all Californians.

This solution comes in the form of “scope of practice” expansion, which essentially means allowing less qualified health care professionals, such as nurses and physician assistants, to take on roles traditionally reserved for physicians.

Let me be very clear about why you should be alarmed.  Because there are not enough doctors to handle all of these new patients, government wants to redefine who is actually a doctor.  Seriously.  Literally overnight someone who did not have the minimum qualifications to perform surgeries, administer chemotherapy drugs, and so on – will suddenly be able to do so.

The legislative author of this ingenious idea (not), State Senator Ed Hernandez (the bills are SB 491 492 and 493), seems to think that the best way to deal with California’s mounting “access to care” problems is simply to lower the standards regarding who can administer that care.  I guess he subscribed to the Bill Clinton admonition, “It depends what is, is.”

Can you imagine the uproar that would have ensued if Obamacare had axed a few years of anatomy or biology courses off the nation’s medical school curriculums? Or done away with residency requirements and flooded the market with thousands of unqualified, dangerous new “doctors?”

These scope of practice expansions care doing essentially the same thing, and unless stopped, will end up being yet another reminder of why President Obama’s promise of health care reform was one that he would have been better off keeping to himself.