On gun shows and leisure suits…

What do leisure suits and gun shows have in common? More than you might think. It turns out that some members of the California Senate don’t particularly like either. But I’ll bet in this Legislature, gun shows are despised more.

But this is about constitutional rights, and not the right to wear ugly, pastel, stinky polyester clothing with the knees permanently stretched out.

At issue is whether the California Legislature can dictate who rents the Cow Palace. After taking a vote Thursday on SB 475 by Sen. Mark Leno, D-San Francisco, the majority of senators think they should be able to decide.

Leno said the community surrounding the Cow Palace in South San Francisco does not want gun shows at the entertainment and exposition center. According to Leno, local residents have taken the issue up with San Mateo and San Francisco counties. But the Cow Palace is owned by the State of California, leaving the counties without final jurisdiction over the facility.

“This is about community values,” Leno said.

Senators have once again trampled on the Constitution.

There was one exception to the Democratic majority in support of Leno’s bill. “I hope we don’t begin to say ‘what I do and don’t like’ simply because we don’t like someone’s activity,” said Sen. Rod Wright, D-Inglewood. “I don’t like guys who wear leisure suits, so they should be banned from renting the Cow Palace?”

“There is no evidence that people who left the gun show shot up San Francisco or committed crimes,” Wright added.

What Leno did not say is the area surrounding the Cow Palace has a history of year round violence, which has nothing to do with the four gun shows a year. 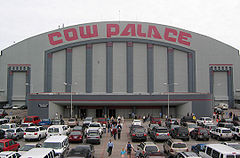 “Their condition is exacerbated because of the gun shows,” Leno added. “It’s about community values.”

Community values probably have very little to do with Leno’s bill, and more to do with gun control activists inappropriately and cruelly using a violent neighborhood as a convenient prop.

Crossroads of the West Gun Shows take place four times a year inside the Cow Palace. Sen Ted Gaines, R-Rocklin, said there are no records or reports of guns sold at the show ever used in a crime.

This isn’t about community values, it’s about activist hysteria and hype.

A recent story in the San Jose Mercury News explained more. “But critics say it is offensive to hold the Bay Area’s most prominent gun show in the vicinity of poor and working-class neighborhoods, including Bayview-Hunters Point in San Francisco, that are plagued by gun violence. San Francisco District Attorney George Gascon said Friday there have been 75 gun-related crimes in the past six months within 2 miles of the Cow Palace.”

The rest of the story

Since the 1970′s Bayview-Hunters Point, also the location of a decommissioned naval shipyard, has been overrun with gangs, drugs, high murder rate, violent crime, discrimination, police harassment, and poverty. The area has one of the highest crime rates in all of San Francisco, despite having only a small fraction of San Francisco’s entire population. Some reports have found nearly 30 percent of San Francisco’s homicides occur in this area.

Is this because of the Crossroads of the West gun show, held at the Cow Palace four times each year?

Instead of blaming a constitutionally protected right with which they don’t agree, Leno, along with the area’s other state and U.S. elected representatives, Assemblyman Tom Ammiano, and U.S. Rep. Nancy Pelosi, also Democrats, may want to ask why these residents have been forced to live under such violent, abysmal conditions for so many years.

TIP to Leno: It’s not about the Cow Palace gun show, or the people who frequent it.

SB 475 was passed almost entirely along party lines, 25-13. Sen. Wright was the only Democrat to vote against it.