We are now heading into the fourth consecutive “change” election in 2014.  In California, Republicans are hoping for more success than we experienced in 2010.

In that year, popular myth holds that the Republican “wave” washed across America, but stopped at the California border.  For some reason, it was believed, we did something different that kept us from electing the same number of new Republicans as we did in other states.

But like so many myths, this one is wrong too.

It turns out that in 2010, in the six most populous Democratic states, we elected only one Republican statewide candidate: Mark Kirk was elected to the Senate in Illinois.  Every other statewide Republican candidate in states such as New York, California, Massachusetts, Illinois, Connecticut, etc. lost.  The 2010 Republican wave benefitted the entire country – except in its most Democratic strongholds.

What puts California in this category?

Republicans in the state have struggled for years looking for an answer.  Some believed redistricting reforms and abolishing party primaries would solve the problem.  A decade ago, some believed a more “professional” state GOP that was driven by staff and elected officials in Sacramento would be the solution.  These approaches have all tried to turn back the rising blue tide.

What’s the real source of the Republican Party’s problems in California?

When Ronald Reagan was elected President in 1980, California’s population was 19% Latino.  Today it’s 38%.  Our Asian population has almost tripled, from 5% to 13.6% in 30 years.  Together, these groups now constitute 51% of the California electorate.  Yet, President Obama and the Democrats won among Latinos and Asians with roughly 75% of the vote. 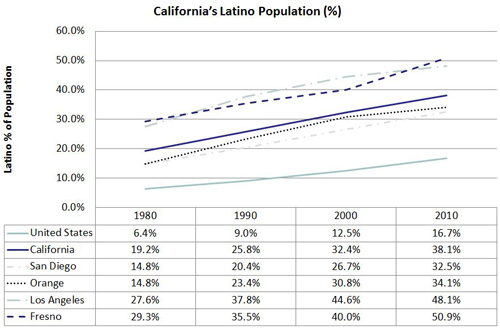 This means that today, a statewide Democrat candidate in a November election can, all other things being equal, count on receiving 38% of the vote before even spending a dollar.  And that doesn’t count a single white vote.

While so much emphasis goes to the top of the ticket, such as the Presidential or Governor elections, the hill is even steeper for downticket statewide Republican candidates.  Their campaigns garner far less attention, which leaves voters to revert to their partisan tendencies and that huge 2 million+ Democrat registration advantage.

And unfortunately, among too many Latinos, Asians, and African-Americans, that opinion is not good.

And for many of those Republican elected officials, there is no “Latino problem.”  Well-respected analyst Charlie Cook notes that following the 2010 redistricting, which in most states was controlled by Republicans, the average Republican House district became even whiter, with the non-Hispanic white vote in GOP districts rising from 73% to 75% even while nationally the share of the non-Hispanic white vote dropped from 69% to 64% in the same period.

In other words, while the country is becoming more diverse, Republican House districts are become less so.

As a result, a growing number of Republican elected officials don’t really need to be concerned about not offering positive solutions on issues of particular concern to immigrant groups.  For them, in their district, there is no problem.  Yet, they are defining the Republican brand not only in their districts, but in everyone else’s district and state as well.

Many Republican Party leaders ignore the role of GOP elected officials in perpetuating the party’s branding problem because no party leader wants to risk upsetting elected officials.  Yet, the pressure to fix the GOP’s massive Latino, Asian and African-American problems is enormous, and so begins another round of “outreach programs.”

While very well intended and positive, the efficacy of these programs will be crippled unless and until Republican elected officials in Washington commit to win the Latino, Asian, and African-American vote in their own district, whether they need to for their own re-election or not.

Such a shift would impact the messaging, scheduling, and hiring of our elected officials, without forcing anyone to abandon core principles.

I discussed this with a key staff member in the House GOP leadership, who agreed that many of our Republican elected officials in Washington are perpetuating the party’s problems with diverse communities by having a tin ear when it comes to issues of particular concern to these voters.  The staff member also noted that many members are more concerned with heading off a primary challenge from the right than winning among voters who have gotten used to voting for Democrats.

Why should Republican elected officials from states and districts with tiny Latino populations care about redefining the GOP brand, when their own re-election is unaffected by it?

The Electoral College math does not work for us until we solve this problem, and waiting for a 2016 Presidential candidate to be the savior isn’t a strategy.  It’s an excuse.

It’s time for every Republican elected official to step up, recognize that they help to define the GOP brand, and start defining themselves and the Republican Party not in terms of what we are against, but rather what we are for.

Ron Nehring served as Chairman of the California Republican Party from 2007 to 2011.  He hosts a strategy and political technology site at RonNehringLabs.com.