What would C.C. Meyers do to solve Bay Bridge debacle?

The Caltrans Bay Bridge debacle is worse than just a case of embarrassment for government infrastructure projects. The bridge is unsafe, according to engineering experts across the country, after the discovery that a third of the of the 96 massive, high-strength steel rods, installed for seismic safety, cracked under pressure when the nuts affixed to the rods were tightened. 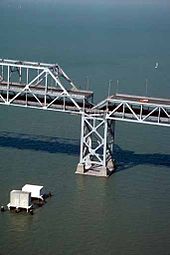 Under construction for more than a decade, the Bay Bridge project has not only taken much longer to build than planned, but cost overruns have escalated the total cost to build it to a whopping $6.4 billion. And that’s not the half of it.

According to CBS San Francisco, retired Bechtel metallurgist Yun Chung recently prepared an unsolicited 32-page report stating that Caltrans engineers “were ignorant to the threat of hydrogen embrittlement — a process in which high strength metals, such as steel, become brittle and fracture due to hydrogen exposure.” He said Caltrans “fell on its face.”

Chung, who specialized in high-strength steel analysis for the nuclear power industry, reported that Caltrans only focused on the hydrogen effects during the production process.

This is the result of the close alliances between government and public employee labor unions which make the purpose of the work appear secondary to union interests, even when public safety is involved.

The Loma Prieta Earthquake, 7.1 on the Richter Scale, which caused the Oakland Bay Bridge to break, took place 24 years ago in 1989. During the 15-second earthquake, the freeway buckled and twisted, causing the support columns to break. The upper freeway deck crashed onto the lower deck; 41 people were crushed to death in their cars.

1989 seems like a lifetime ago. And Caltrans has been working on the Bay bridge the entire time.

Immediately after the Loma Prieta earthquake in 1989, the civil construction bridge building contractor, C.C. Myers of Rancho Cordova, rebuilt two damaged bridges on Highway 1 near Watsonville under budget, and ahead of schedule.

Caltrans allowed only 100 days for completion of the project, and offered Meyers cash incentives to make the project happen under budget, and ahead of schedule. Meyers finished the job 45 days earlier than the Caltrans deadline, and earned $1 million in incentives.

That’s the free market at work.

Myers rebuilt the Santa Monica freeway the same way after the 1994 Northridge earthquake.

In 1994, the Northridge earthquake in Southern California, 6.7 on the Richter Scale, damaged four bridges on the Santa Monica Freeway in Los Angeles. Myers’ successes with the projects after the Loma Prieta earthquake made his company a natural for this project.

C.C. Myers, Inc. won the contract to replace and replace the freeways with one caveat: the work had to be completed in 140 days. But this was L.A., notorious for congested freeways. The State of California offered Meyers $200,000 per day as a bonus for every day ahead of schedule the project was completed. Meyers’ company finished the job in 66 days, 74 days ahead of schedule, and received a $14.8 million bonus for his outstanding work.

Experts said Myers managed to perform what would have taken Caltrans 18 months of work, in only 66 days.

C.C. Myers is a shining example of the free market. “Six years ago, C.C. Myers and his team proved dramatically that if bureaucracy will simply get out of the way, we can build highways cheaply, quickly and safely,” Rep. Tom McClintock said in year 2000 at a press conference, commenting about the rapid opening of the freeways.

Compare these two fantastically successful projects with Caltrans’ handling of the Oakland Bay Bridge project — years behind schedule and billions of dollars over budget, along with all of the other malfeasance, dishonesty, payola, and shadiness I wrote about recently in, “Despite Caltrans boondoggles, acting director to be confirmed.”

“In March, anchor bolts meant to secure seismic equipment on the new bridge broke — an event attributed partly to water-induced corrosion,” the Sacramento Bee reported. “Caltrans similarly failed to take basic precautions to protect many skyway tendons from water even after the agency completed its study. Those lapses and others, said nine leading experts in the corrosion of bridge tendons, introduced uncertainty about the durability of the skyway.”

“Experts said that while a total collapse seemed unlikely, if Caltrans miscalculated corrosion estimates a major quake could cripple sections of the skyway.”

The Bee continued: “Experts agreed that strong skyway foundations and piers, plus the factor of safety — ’10 percent extra tendons,’ according to Caltrans — make a disastrous collapse of the bridge improbable, even in a devastating quake.”

But if tendons are more corroded than Caltrans’ study indicates, said Hawkins of the University of Illinois, a massive temblor might render one or more sections of the skyway unusable.

Another looming question, experts said, is whether taxpayers have purchased the $6.4 billion bridge they were promised, or a structure that will require costly repairs relatively soon.

Caltrans Director Matthew Dougherty was just reconfirmed by the Senate. It’s under Dougherty’s watch and decades in management at Caltrans that many mishaps, corruption, mistakes and cover ups have taken place.

Caltrans officials know C.C. Myers would have had this project wrapped up years ago, delivered under budget and ahead of schedule. It is not too late to bring them in to clean up this mess.