When Los Angeles Mayor Antonio Villaraigosa loses his job in July, he’ll also lose access to some swanky public housing. Zocalo Public Square is helping the mayor’s transition with its Adopt-a-Mayor program, a neighborhood competition to determine the best block in town. In the following piece published at Zocalo Public Square, I make the case for a micro-apartment.

Micro-House This Ex-Mayor
Before the mayor decides where to live, he needs an honest appraisal of what he needs out of his next home. As an unattached, career-focused professional transitioning between jobs, Villaraigosa could at any moment be called into service in Sacramento, Washington, D.C., or even foreign capitals like London or Mexico City. He doesn’t need a long-term lease anywhere so much as he needs, in the words of George Carlin, a place for his stuff.

That’s why the mayor should consider micro-housing. A throwback to the 1970s mantra “small is beautiful,” micro-apartments cram all the necessities of modern living into tiny spaces, usually less than three hundred square feet. Every inch of space is utilized in these minimalist homes. They’re ideal housing for people like the mayor who frequently travel, need limited space, and want to reduce unnecessary expenses—so long as you don’t mind home goods stacked like Russian nesting dolls. 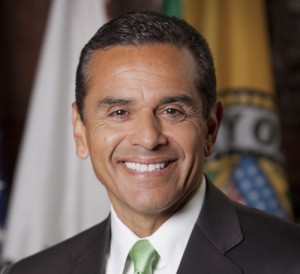 In the process of lowering his monthly expenses, the mayor would be conducting an extreme home makeover of the American Dream: how to be successful without a big-home status symbol.

American attitudes about success are inextricably linked to house size. This wasn’t an accident but a byproduct of the assembly-line era, when big corporate employers wanted a reliable and stable workforce anchored to the local factory. “Moving up to a larger home became a signpost along the roadway to success,” writes Rick Grant at HousingWire.com, a website that tracks the U.S. housing market. “People paid attention to every aspect of the home and keeping up with the Joneses meant making sure your home was just as nice as your neighbor’s.”

Tax laws, ranging from the Home Mortgage Interest Deduction to the First-Time Homebuyer Tax Credit, have only exacerbated the problem. Economists argue that these tax breaks don’t increase access to home ownership; rather, they expand the home sizes and debt burdens of those already buying.

Bigger homes inevitably lead to finding more things to fill them with. “That’s what your house is,” Carlin used to joke, “A place to keep your stuff while you go out and get … more stuff!” Increasingly, our stuff has consumption habits of its own. David I. Levine, a professor at UC Berkeley’s Haas School of Business, estimates that phantom power, or energy use by appliances on standby, increases household energy consumption by 5-10 percent.

The values of the new economy are akin to the mayor’s lifestyle: mobile, flexible, international—all of which are best served by a micro-home. Los Angeles has relatively few micro-housing options so the mayor should move quickly. And that might be the best reason for the mayor to go micro: It’d correct for eight years in which Boston, Seattle, and San Francisco surpassed the City of Angels in the micro-housing movement.