[Publisher’s Note:  We are pleased to offer this original commentary penned by Assembly GOP Leader Connie Conway.  We hope you enjoy it – Flash] 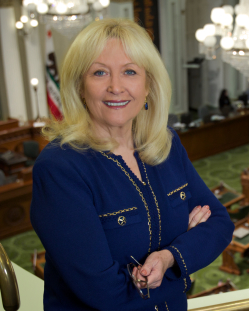 When I am asked to speak to community groups in my district, I often describe the State Capitol as the Disneyland of Northern California.  Too many of my colleagues in the majority party are living in a Fantasyland where they think can spend as if there is no tomorrow.

We saw this on full display last week as the Legislature considered literally hundreds of measures before a key deadline.  Between May 20 and 31, the Legislature collectively passed 393 bills.  To be sure, Sacramento liberals pushed through some very bad legislation that will collectively increase state spending, impose costly new burdens on employers and expand the reach of government into more aspects of our lives.

But as I’ve often said, Republicans are the last line of defense for California taxpayers.  By standing together, Republicans were able to prevent some of the worst of the worst measures from passing – legislation that would hurt the economy and wallets of hard-working Californians alike.

With Republicans strongly opposed, Democrats were forced to shelve proposals to increase taxes on gas, soda and cigarettes; limit the ability of young adults to drive and weaken tough-on-crime public safety protections.  Even more encouraging, just 5 of the 37 measures that the California Chamber of Commerce had labeled “job killers” were approved by either the Assembly or the Senate.

Most notably, we were able to stop three measures pushed by Democrats (Assembly Bill 288 – Levine, Assembly Bill 669-Stone, and Assembly Bill 1323 – Mitchell) to restrict, if not ban, fracking in California.  Fracking is an important part of our efforts to create jobs and increase our energy independence.  In fact, Governor Brown has called fracking “a fabulous economic opportunity.”

A study from the University of Southern California found that fracking could generate almost $25 billion in revenue for state and local governments and create up to 2.8 million jobs by 2020.   At a time when unemployment rates in California remain one of the highest in the nation, turning away new jobs is the last thing that the Legislature should do.

Republicans also helped to defeat an irresponsible proposal (Assembly Bill 473 – Ammiano) that would permit for-profit marijuana dispensaries across California and create a new state department to regulate them.  Many Californians strongly oppose the establishment of pot dispensaries in their communities.

We also helped to protect access to health care for all Californians by blocking a proposal (Assembly Bill 975 – Wieckowski) that would have threatened the ability of health providers to offer charity care to those who need care the most.  In my view, this legislation was nothing more than another attempted power grab by the nurses union over the operations of non-profit hospitals.  If the bill had passed, labor bosses could threaten non-profit hospitals with lawsuits and the potential loss of their state tax exemptions if they operate in any way the union deemed inappropriate.

Another bad idea Republicans helped to defeat was legislation (Senate Bill 405 – Padilla) to outlaw plastic grocery store bags in California.  We know that banning plastic bags will raise grocery prices for consumers and force them to carry reusable bags, which can get contaminated and make people sick.  Worse, outlawing plastic bags would also result in lost jobs for manufacturers of plastic bags in California.  It’s time the majority party stopped trying to live people’s lives for them.

Though it was disappointing to see the passage of many pieces of legislation that are not good for California, I’m proud of the efforts of my caucus in recent weeks.  While surely there will be more opportunities in the coming months for the majority party to impose their costly, big government agenda, Republicans have shown that we can make a positive difference for Californians when we stand united.