Since 2009, the City of San Diego has been planning a major expansion of its downtown convention center. It is expected to cost $520 million, or more than $1 billion if interest payments to bond investors are included in the total cost.

The city’s downtown business and civic leaders are eager to expand the convention center to maintain trade shows such as Comic-Con and attract new trade shows.

That eagerness presented the devious union leaders of the San Diego-Imperial Counties Labor Council with an opportunity to establish themselves as the chief opponents and obstacles to the proposed project. Opposition could be withdrawn – for a price.

After exploiting the California Environmental Quality Act (CEQA) and filing a lawsuit to challenge the financing plan, unions were able to obtain several economic and political benefits through the office of former Mayor Jerry Sanders. In exchange for these payoffs, the unions withdraw their obstacles and committed to end their opposition and support the convention center expansion. 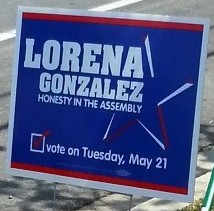 The backroom union deal – explained below – was a bipartisan affair between an outgoing Republican mayor and a politically ambitious union official who would soon be a Democrat member of the California State Assembly. It involved the usual California trifecta of Big Business, Big Labor, and Big Government. And NONE of it was ever discussed or voted on in a public meeting.

Apparently the parties involved with this deal smugly assumed that no one from the public would have the interest, knowledge, or gumption to make local union leaders or politicians accountable for it. But an organization called the Coalition for Fair Employment in Construction had become very familiar with the modus operandi of union leaders who plot to reap economic and political rewards by holding up California development projects.

Gaylord Entertainment had abandoned its 2007-2008 proposal to build a $1.2 billion hotel and conference center in Chula Vista in part because of union threats to stop the project using CEQA until demands were met for construction and hotel employee labor agreements. With the derailment of the Gaylord project, the convention center expansion became the highest-profile proposed construction project in the San Diego region.

It was an obvious target for a union monopoly on construction. The Coalition for Fair Employment in Construction tracked every union move related to it.

It was not a surprise when UNITE HERE Local Union No. 30 filed a lawsuit against the City of San Diego challenging the financing structure to pay for construction of the convention center expansion.

It was not a surprise when the San Diego County Building and Construction Trades Council submitted comments under the California Environmental Quality Act (CEQA) objecting to the Port of San Diego’s draft and final environmental impact reports for the convention center.

Nor was it a surprise when political and union leaders advanced a scheme to evade a “Fair and Open Competition” ordinance applying to city construction contracts. Proposition A had been approved by 58% of San Diego voters in June 2012, but union leaders weren’t going to let the democratic will of the voters impede their quest to force all construction companies on the project to sign a Project Labor Agreement. 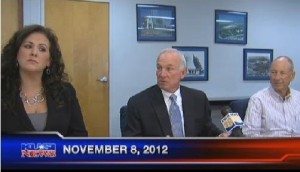 The Coalition for Fair Employment in Construction was prepared and poised to strike back aggressively on behalf of fair and open competition, fiscal responsibility, and transparent and accountable government for the people. The day of action finally came on November 8, 2012.

Three days after Bob Filner was elected as his replacement, Mayor Sanders hastily convened a press conference with Lorena Gonzalez to announce that unions were dropping their opposition to the convention center expansion. Some reporters at the press conference suspected correctly that union officials had arranged a secret deal for a Project Labor Agreement, and they peppered participants with questions. 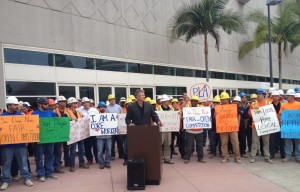 A few days after the press conference, the Coalition for Fair Employment in Construction held its own press conference at the convention center and vowed to expose the mechanizations of the deal. Union leaders and their community supporters mocked in response. A political columnist for a left-leaning community publication criticized the UT San Diego editorial board for giving the “‘Coalition’ publicity when virtually no other media outlet would.”

The Coalition for Fair Employment in Construction did manage to obtain the three settlement agreements between the unions and the city to end the CEQA complaints and financing litigation, but after several months of futilely submitting public records requests, it was compelled to file a lawsuit in San Diego County Superior Court to obtain documents related to the deal.

In the past few months, city officials have released batches of relevant (and irrelevant) documents, including the long-withheld Project Labor Agreement with unions that construction companies will need to sign as a condition of working on the convention center expansion. Still, the city has failed to provide many of the requested documents. In addition, it appears that certain prominent figures were exerting a lot of influence as advisors within the city government while not bothering with required procedures for accountability, such as submitting FPPC Form 700 Statements of Economic Interests. The Coalition for Fair Employment in Construction has developed a long list of questionable internal practices in the mayor’s office as a result of its research and findings.

Now the Coalition for Fair Employment in Construction has experienced a major breakthrough: city officials discovered that Julie Dubick, the Chief of Staff to Mayor Jerry Sanders, was using a private email address to conduct this sensitive public business. On September 21, 2012, Dubick had emailed a proposed seven-point deal to Lorena Gonzalez – head of the San Diego-Imperial Counties Labor Council – and her executive assistant Todd Klein. One minute later, she emailed the same proposal to Steve Cushman, special assistant to Mayor Sanders.

This meeting occurred two days after Mayor Sanders spoke in support of the convention center expansion and Lorena Gonzalez spoke in opposition to the convention center expansion at a meeting of the board of the Unified Port of San Diego. That meeting and the union CEQA document dump is described in my September 20, 2012 www.FlashReport.org article Union Officials Intimidate San Diego Civic Leaders: Threaten to Use the California Environmental Quality Act (CEQA) to Block the San Diego Convention Center Expansion.

The deal itself and my analysis of how the deal was implemented is below. 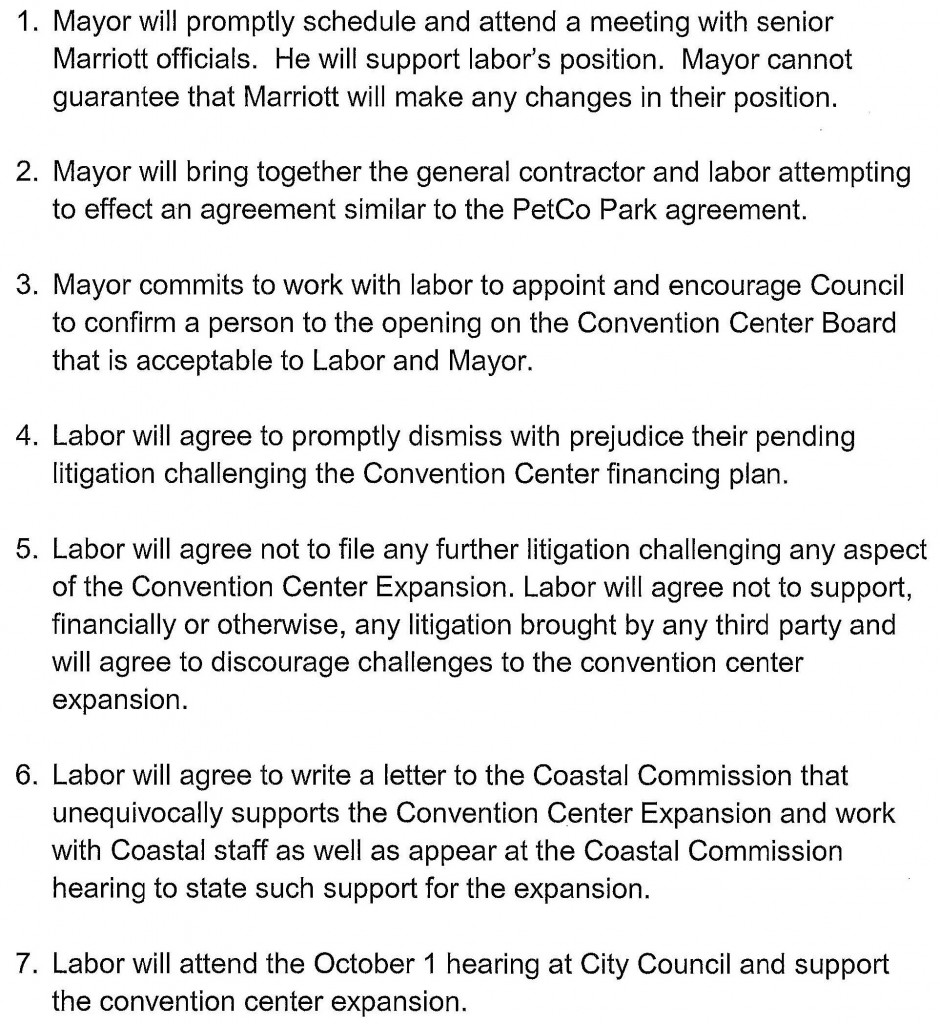 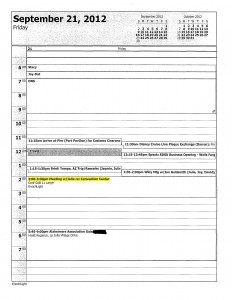 Provision #1 – the Mayor has to meet with officials of Marriott to support a union position on something.

UNITE HERE Local Union No. 30 had submitted environmental objections under CEQA in 2010 and 2011 when the San Diego Marriott Marquis & Marina proposed a hotel ballroom expansion. Nonetheless, the Board of Commissioners for the United Port of San Diego approved the final Environmental Impact Report in December 2011. However, the California Coastal Commission did not approve the project until November 15, 2012. Mayor Sanders’ schedule indicates an 8:30 am phone call on October 17, 2012 with Host Hotels & Resorts, which owns the San Diego Marriott Marquis & Marina.

Provision #2 – the mayor has to facilitate meetings with the unions and the construction manager at-risk for the convention center to get an agreement similar to the one used on Petco Park (a Project Labor Agreement).

In its proposal for the convention center, Clark Construction had committed to negotiating and implementing a Project Labor Agreement similar to the one used on Petco Park, if the city requested it. (See below.) At the recommendation of an internal committee that based its decision on somewhat subjective “best value” criteria authorized under state law, the San Diego City Council awarded the construction manager at-risk contract to Clark Construction on October 1, 2012. 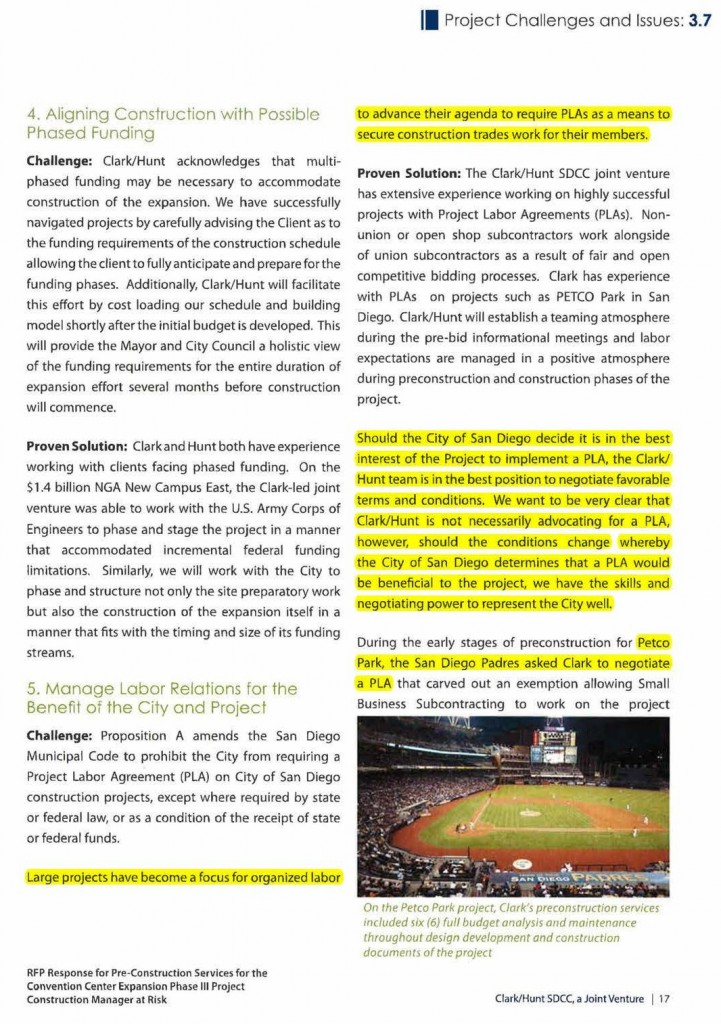 This provision in the deal appears to violate a city “fair and open competition” ordinance approved by 58% of San Diego voters in June 2012 as Proposition A: Prohibits the City from Requiring Project Labor Agreements on City Construction Projects.

Provision #3 – appoint someone to the San Diego Convention Center Corporation Board of Directors suitable to the unions (and to the mayor).

On November 8, 2012 (the same day as the press conference announcing the end of union opposition to the convention center expansion), Mayor Sanders announced the appointment of Rabbi Laurie Coskey, Executive Director of the Interfaith Committee for Worker Justice, to the board. Her appointment was especially praised by the United Taxi Workers of San Diego, which became affiliated with the San Diego-Imperial Counties Labor Council in July 2012. 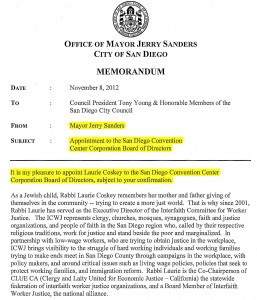 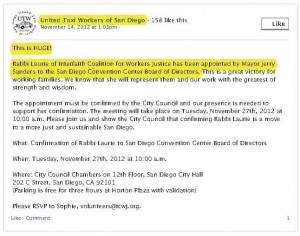 Provision #4 – unions will abandon their lawsuit against the tax assessment plan to finance the expansion project.

Provision #5 – unions will not file any litigation against the expansion project and will discourage others from filing litigation.

The comprehensive CEQA complaints fizzled away into mild settlement agreements:

Notable in these settlement agreements is the abandonment of the union demand that the Environmental Impact Report address the effect on the convention center expansion of an expected sea level rise caused by global warming. As it turns out, the California Coastal Commission sees this as a legitimate concern, and its approval of the project has been delayed, reportedly because of this issue. See San Diego Union Officials Ignored Global Warming-Related Sea Level Rise in Environmental Settlements for San Diego Convention Center Expansion, Despite Identifying It as Major Deficiency Under CEQA.

Provision #6 – support the project publicly at the California Coastal Commission.

This provision has not been fulfilled because the project has not appeared on the Coastal Commission final meeting agendas. Perhaps the San Diego-Imperial Counties Labor Council has already submitted a letter of support.

At the January 24, 2012 San Diego City Council meeting, Lorena Gonzalez and numerous other union representatives spoke against resolutions regarding the financing of the convention center expansion.

Lorena Gonzalez, secretary-treasurer of the San Diego and Imperial Counties Labor Council, said labor support of the project will be contingent on ensuring that local workers are hired for the construction, low-wage tourism workers get added benefits from hoteliers and environmental mitigation result from the impacts of the bigger building. “We’re not there yet,” she said.

They got there in the end. And now you know how it happened.