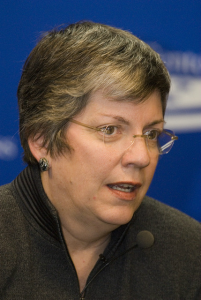 A startling announcement early Friday morning caught many Californians off guard: Homeland Security chief Janet Napolitano is resigning and moving to California to head the University of California system.

This is a real eyebrow-raiser, and just more proof that everything in California is political, including our college system.

UC regents obviously made this decision behind closed doors.

Some say Napolitano’s career with the Obama administration has run its course, particularly given her lack of success with always contentious immigration issues. And where does a career politician go when that career has run its course? Right to California to become the first female president of the already broken University of California system.

There is the possibility the UC system job is an entrée for Napolitano into California politics. She may even be eyeing U.S. Sen. Diane Feinstein’s senate seat.

“I’m not sure if this counts as failing sideways or downwards, but Janet Napolitano, best known for implementing a wholly imaginary form of homeland security, is retiring to pursue her love of overseeing completely dysfunctional organizations,” Daniel Greenfield with Front Page magazine reported.

Napolitano certainly cannot be considered successful at Homeland Security, given the recent terrorism activities in the Boston Marathon bombing by the Tsarnaev brothers.

“’While some may consider her to be an unconventional choice, Secretary Napolitano is without a doubt the right person at the right time to lead this incredible university,” Sherry Lansing, the regent and former film industry executive who headed the search committee, said in a statement being released Friday, the Los Angeles Times reported.

“In an era of tight budgets, public universities are seeking leaders who can bargain as peers with governors and legislators and also impress alumni and parents,” the Times said. “Napolitano will deal with Gov. Jerry Brown, who is a UC regent and has been pressing UC to move more quickly into online education and to improve graduation rates.”

Not everyone is happy with this decision. “It’s disappointing to see an individual with such a poor record on civil liberties and government transparency selected to run the University of California,” former California Senator and now Rep. Doug LaMalfa, R-CA, said. “University of California students can look forward to the same authoritarian management style Secretary Napolitano brought to the Department of Homeland Security, hardly a bastion of free speech and open government. While I am pleased to see her leave Homeland Security, Napolitano’s views are entirely incompatible with the UC system’s history of civil liberties and the decision to appoint her is perplexing,” according to the Sacramento Bee.

Who is Janet Napolitano?

Napolitano is a pro-choice, centrist Democrat, according to her bio on U.S. Liberals. She was born in New York City and grew up in Pittsburgh, Penn., and Albuquerque, N.M. She earned a bachelor’s degree from Santa Clara University and a law degree from the University of Virginia.

Prior to her political positions, Napolitano was best known for representing law Professor Anita Hill in her 1991 testimony against U.S. Supreme Court nominee Clarence Thomas. Hill accused Thomas of sexual harassment while she worked for him at the Equal Employment Opportunity Commission. However, Hill and feminist allies were not able to prevent Thomas from being confirmed to the Court.

“As columnist Stephen Chapman wrote in the Chicago Tribune at the time of the hearings: ‘. . . to believe Hill, we have to believe that someone who had been the soul of probity suddenly, on her arrival, became a sexual thug — and then, the moment she left, wholly reverted to his saintly self, never to transgress again,’” as quoted by David Brock in The Other Anita Hill. Anita Hill remains Thomas’s lone accuser.

Two years later, President Bill Clinton named Napolitano as U.S. attorney in Arizona. She was elected the state’s first female attorney general in 1998, and in 2002 she was elected Arizona governor.

Napolitano was still in her second term as Governor when President Obama nominated her to be the third Secretary of the Homeland Security Department in 2009.

Janet Napolitano was reportedly considered by Democrat John Kerry to be his 2004 running mate for the White House.

In a 2006 interview, she stated, “I believe firmly that education is the gateway to prosperity. That’s why we’ve worked hard to implement voluntary full-day kindergarten statewide, and to support our teachers with a historic pay raise and training.”

Napolitano’s father, Leonard Napolitano, is the former dean of the University of New Mexico School of Medicine, an important connection for the UC system, according to some reports.

“Napolitano’s new job, like her old job, will require her to do nothing while pretending to be doing something,” Frontpage magazine‘s Greenfield said. “No wonder she’s qualified for it.”