The dubious arena deal in Sacramento has strange bedfellows aligning. The lack of public debate, the fishy numbers put out by the city, and the deceit about the growing public subsidy has angered many voters. Now legislation by Sen. President Pro Tem Darrell Steinberg, D-Sacramento would let the stadium developers avoid a real environmental impact review in order to forge ahead without public debate. 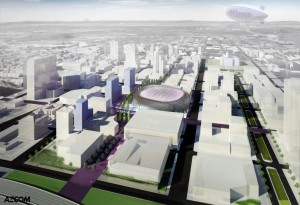 But it gets even uglier. I have written extensively about this bad “public-private deal” — a bureaucratic expression which should always generate skepticism.

The Steinberg bill, which will be formally introduced today, would allow the city to bypass addressing real traffic impacts in its Environmental Impact Report on the arena project. According to several analysts I’ve spoken with, the bill will actually bar a Superior Court judge from enjoining construction of the arena unless he finds that it threatens “health or safety.” If this happens, proponents will be able to go judge shopping and find a one who will rule that major traffic congestion,regardless of how bad, doesn’t impact health or safety.

Once the construction gets started on the arena, it will be nearly impossible to stop. And that’s the breaking point.

However, once construction is underway, many anticipate Caltrans will then announce the I-5 freeway will need hundreds of millions of dollars in improvements to deal with the resulting arena traffic congestion. And Caltrans can require additional lanes, new off-ramps, and upgraded off-ramps.

The question then becomes who pays for it?

This area in downtown Sacramento is already congested. The proposed arena is slated to go into an existing downtown mall bordering the I-5 freeway. This location is where most downtown workers access multiple freeway connections and interchanges headed in all directions – North on I-5, South on I-5, South on Hwy 99, East on I-80, and West on I-80.

Caltrans and the state transportation commission could tap state transportation bonds, which will burn up money originally earmarked for necessary projects in other parts of the state. Or, Caltrans could stick the city and its taxpayers with the bill, adding at least $250 million or more in total costs to the $350 million subsidy taxpayers are already expected to pay into the arena.

The bill’s language is going to be dropped right into an existing bill in a process known as gut-and-amend. The bill will not go through the legislative committee process, and will not have public debate. Do Californians really accept this as legitimate public policy?

Steinberg’s bill is even worse than previous stadium legislation, which passed last year granting CEQA exemptions for a proposed stadium in downtown Los Angeles for a pro football team, and for a new stadium for the San Francisco 49ers in Santa Clara.

Sacramento is a Project Labor Agreement lovin’ city and county, and uses these agreements for nearly everything built. All public projects in the Sacramento region cost up to five times as much as they should cost. The $1 billion terminal at the Sacramento airport, located in Sacramento County, is evidence of these inflated construction costs.

Sacramento, founded in 1848, is located on two rivers, neither of which has ever been developed. In the downtown, K Street was turned into a pedestrian mall in the 1960′s. It was a failure, but only made worse by the city redevelopment agency, which spent several hundred million dollars over the years in highly suspect redevelopment projects, annexing privately owned buildings and property along the street. K Street was turned into a giant slum by the Sacramento Housing and Redevelopment Agency, with a compliant City Council.

Property values along K Street have taken a huge dive. As the biggest slumlord K Street, the city’s primary interest in a downtown arena is merely as a property value rescue for the city. But this is a nasty déjà vu for taxpayers — they have already paid for these properties, several times over.

One group of citizens opposes a public subsidy to build the arena, and wants the dubious deal exposed before the voters. SacramentoTaxpayers Opposed to Pork is currently engaged in a campaign to place an initiative on the June 2014 ballot that would restrict the City of Sacramento from using public funds for the development or construction of a professional sports arena without approval by a simple majority of voters. But the arena supporters, developers, crazed super fans, and even the city, have thrown up many roadblocks trying to prevent the public from voting on an arena subsidy.

A recent poll by Sacramento Taxpayers Opposed to Pork found 78 percent of the respondents favor a public vote on taxpayer subsidies for the arena. Yet Steinberg and Sacramento Mayor Kevin Johnson, a former NBA player, are forging ahead as if it’s already a done deal.

Steinberg’s bill represents everything wrong in government today. Voters must have a chance to vote on the public subsidy of the Sacramento arena. Despite the special interests of politicians, labor unions and wealthy developers, liberty is still important.

Read all of my stories on the dubious arena deal HERE.