[Publisher’s Note:  Last night the California legislature adjourned for the rest of the year.  Below is a post-session column penned by Assembly Republican Leader Connie Conway – Flash] 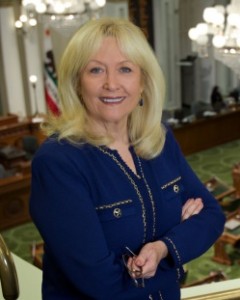 Just after midnight on Friday, the Legislature adjourned for the year having completed its business for the 2013 legislative session.

Obviously, our job was more challenging this session facing the Democrat supermajority and their big government agenda.  But as Republicans showed on the softball field a few weeks ago when we beat the Democrats in the annual legislative softball game, we can overcome long odds and achieve real victories when we stand united together.

Our most immediate victory will ensure that thousands of dangerous criminals remain locked up behind bars where they belong.

Since it was first enacted two years ago, Republicans have fought hard to protect Californians from the dangers of public safety realignment.  But under a looming federal court order that will take effect at the end of the year, upwards of 10,000 inmates could be granted early release to comply with a court-ordered prison population cap.

Earlier this year, Republicans proposed several ideas to Governor Brown to comply with the court order without granting early release.  The Governor took us up on some of our ideas, and joined with Senator Huff, the Democratic legislative leaders and myself in passing a bipartisan plan to protect Californians.  It will ensure that no criminals are set free in our neighborhoods.

Bringing jobs back to California and getting people working again was also an important priority for us this year.  Republicans fought hard for job-creating tax relief this session.  Ultimately, the Legislature adopted a statewide sales tax exemption on manufacturing and research and development that is available all but two states.

Republicans were also able to stop nearly all 34 bills identified by the California Chamber of Commerce as “job killer” legislation.  Going forward, we will continue to stand as the lone voice in Sacramento advocating real reforms to stop the high taxes, burdensome regulations and junk lawsuits that are driving employers and jobs out of our state.

Another measure we were able to stop (Assembly Bill 976) would have empowered the unelected bureaucrats at the California Coastal Commission to sit as judge, jury and executioner.  In the past, the Commission has taken enforcement actions against farmers for things such as crop rotations and replacing existing fence lines.  Other violations have included the installation of walkways, driveways, and even a water spigot.  This bill would have given them free reign to impose penalties of between $750 and $11,250 per day!

Showing that their appetite to raise taxes on Californians to fund more big government programs is never ending, Democrats this year proposed many different tax increase proposals.  These ranged from new taxes on oil production that would raise gas prices to undermining the historic taxpayer protections in Proposition 13 that make it very difficult to impose higher taxes.  But Republicans stood together to block every effort to erode taxpayer protections in Proposition 13.

Now that the Legislature has adjourned for the year, hard-working taxpayers and struggling small business owners can now breathe a sigh of relief.  The liberal majority will not be in Sacramento for the next 4 months, working overtime targeting their wallets with higher taxes, their businesses with costly new regulations, and their personal freedom with new government intrusions into how people live their lives.