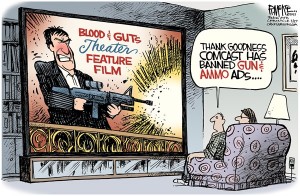 California lawmakers are ignoring the historic recall last week of two Colorado state legislators who backed new gun restrictions. And they are ignoring the Bill of Rights.
Second Amendment

“A well regulated Militia, being necessary to the security of a free State, the right of the people to keep and bear Arms, shall not be infringed,” says the Second Amendment within the Bill of Rights of the U.S. Constitution.

The gun control debate waged during the last eight months in the California Legislature has been an attack on the Second Amendment.
Democratic lawmakers claim the legislation is needed to address acts of gun violence. But who are they trying to control?

Increase in violence, or media hype?

But as I wrote in “Gun control laws would not make us safer,” the worst deadly massacre at a school in American history was not the Newtown shootings, or the Columbine shootings.

The worst school massacre took place before there was even a television in every home — in Michigan in 1927 when a school board official, enraged at a tax increase to fund school construction, planted explosives in Bath Township Elementary school, then blew the school up. When crowds rushed in to rescue the children, he drove up his shrapnel-filled car and detonated it, killing more people, including himself.

While the media and politicians respond purely emotionally and opportunistically, they have ignored that these incidents are not new, and are certainly not indigenous to America.

Despite media claims that these types of mass killings are on the rise, criminologist James Allen Fox, of Boston Northeastern University, who has been studying the subject since the 1980s, said “the random mass shootings that get the most media attention are the rarest,” Fox said. “Most people who die of bullet wounds knew the identity of their killer.”

Experts who study mass shootings say they are not becoming more common or on the rise.

In April, the U.S. Senate killed measures to ban assault weapons and high-capacity magazines, and require background checks during the purchase of guns at gun shows or on the Internet.

Study after study has shown that between 6 percent and 10 percent or criminals are responsible for up to 70 percent of all crimes committed.

Interpretation of the second amendment varies between those who believe it protects citizens’ rights to own guns, and those who do not.

In 2008, the U.S. Supreme Court ruled in District of Columbia v. Heller that the Second Amendment protected the individual right to keep suitable firearms at home for self-defense. This case overturned Washington D.C.’s ban on handguns.

Listed are the lawmakers who authored the gun control bills — all Democrats:

Also by Skinner, AB 1131, increases prohibition periods after credible threat of violence from 6 months to 5 years.

AB 170 by Assemblyman Steven Bradford, D-Gardena, prohibits anyone who owns a business from getting assault weapon permits.

SB 567 by Sen. Hannah-Beth Jackson, D-Santa Barbara, redefines a shotguns to delete the requirement that it be fired from the shoulder.

AB 169 by Assemblyman Roger Dickinson, D-Sacramento, limits transfer of “unsafe” handguns — any pistol, revolver, or other firearm capable of being concealed, which has not been vetted by the California Department of Justice.

AB 711 by Assemblyman Anthony Rendon, D-Lakewood, bans the use of lead ammunition.

If the government can grant rights, it can also take them away. That’s what makes the liberties outlined in the Bill of Rights “unalienable.”

“All power is inherent in the people; . . . it is their right and duty to be at all times armed,” Thomas Jefferson wrote, shortly before his death.

George Mason, a delegate from Virginia to the U.S. Constitutional Convention, believed the relationship between arms and liberty was crucial, and said history had demonstrated that the most effective way to enslave a people is to disarm them.