Shrine To Big Government In Place In State Capitol 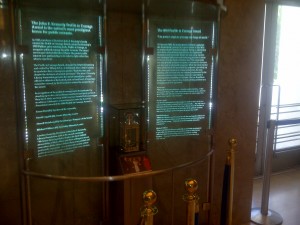 There were a number of low-points from my perspective during the tenure of Governor Arnold Schwarzenegger.  But none was worse for California taxpayers, or for the California Republican Party, than the budget deal of 2009.  At the heart of this particular budget deal was a two-year massive increase in taxes on income, sales and cars in California.  It also included a big cut in the tax credit for families.  Oh yes, the deal also placed on the ballot a two-year extension of those same taxes (which was slaughtered at the polls by voters).  It was a deal that made no sense for the state, and one that Republicans should have been easily able to fend off — after all, we had not only Schwarzenegger, a GOP Governor, but Democrats did not have super-majorities in the legislature back then.  So this deal required GOP legislative votes for both the budget itself, as well as the tax increases. 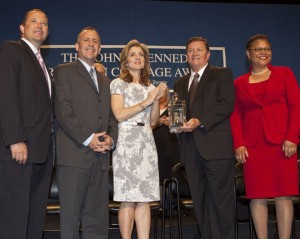 In addition to Schwarzenegger, six legislative Republicans cast their votes for the higher taxes — Senate Republican Leader Dave Cogdill, and Senators Roy Ashburn and Abel Maldonado — and Assembly Republican Leader Mike Villines and Assemblymembers Anthony Adams and Roger Niello.   The purpose of this blog post is not to rehash the reasons why the votes for higher taxes were so bad (you can read that in a column I penned for the Fresno Bee that ran back in April, 2009).  I’m also not writing this to talk about how poorly that tax increase vote impacted those six GOP legislators (you can read that here).  I’m writing to express my revulsion at the fact that there is now a display in the California State Capitol which features a 2010 Kennedy Presidential Library “Profile In Courage” award presented to Senate President Darrell Steinberg, Assembly Speaker Karen Bass, Cogdill and Villines — “in recognition of the political courage each demonstrated in standing up to the extraordinary constituent and party pressure…”

This award was all about the revelry on the left when a bipartisan vote was achieved to reach significantly deeper into the pockets of California taxpayers.  Shameful.   Well, as Democrats walk by this shrine they can smile, knowing that Republicans helped achieve their policy goals, while weakening the GOP and setting the table for the super-minority status they enjoy today.  For Republicans, this display should be a reminder of a terrible thing that was done in 2009, and a reminder that nothing good comes from raising taxes on the people of this State (who are among the most overtaxed people in this nation).