By all reports, the ‘maiden voyage’ of the Tea Party California Caucus (TPCC) at the recent CRP Convention in Anaheim, CA was a complete success. The TPCC digital operation was a big part of that success.

At the convention, caucus managers discovered that they possessed a communications system that could help them deal swiftly with unexpected events in committees, etc., as well as a platform that allowed them to publicize the cause, enroll activist delegates, recruit volunteers, raise funds, organize workers, and cause its TPCC Convention App to go viral on delegates’ mobile phones.

While political opinions may differ, few can assert that the TPCC did not make the splash it hoped to make at the recent Anaheim convention of the California Republican Party.
Digital tech was involved in nearly every aspect of the caucus’ labors at the convention, to recruit additional voting delegates, and to manage the caucus politically while at the convention.
There was time pressure: the newly created digital operation for the caucus had only 35 days from its public launch to being prepared to check-in delegates and manage them at the convention’s opening on an early October Friday afternoon.
The digital ambitions were:

* Like the CRP’s ‘app’, the TPCC mobile ‘app’ was not really a formal mobile app, but a web site optimized for tablets and phones. Unlike the CRP’s app, the TPCC app generated widespread ‘nearly viral’ distribution at the convention through QR codes appearing on lapel stickers, banners, and within the TPCC app itself.

The system we developed excelled at furnishing all of the above, deployed on an ‘as needed’ basis as the convention drew nearer.

Of course, we started with mass emails and online web forms feeding directly into our central database to enroll caucus delegates, associate delegates and to help them manage the proxy process. We also needed to enroll over 100 volunteers to help run the caucus during the convention. Web forms were furnished to gather the contact information on volunteers and direct their enrollments to the proper managers. 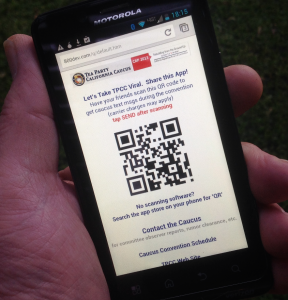 Day in and day out in the run-up to the convention, every manager was kept abreast of current volunteer enrollments, delegate enrollments, and the needs of activists who wanted to become delegates, associate delegates or who had proxy needs, with multiple daily emails sent out automatically to the managers. Each manager was able to track current enrollments to their portfolio in near real-time. Managers had complete clarity about progress reaching their personnel recruitment goals. All personnel goals were satisfied.

One thing caucus leaders wanted clearly conveyed to CRP leaders, however indirectly, was that caucus tech might represent a game-changer for CRP politics. With the ability to send a text message to nearly all convention delegates’ mobile phones on a moment’s notice, caucus leaders felt they could support and encourage an openness and transparency rarely seen in any state’s party politics.
Online contributions were amazing during the 30 day lead-up to the convention. Apparently, Tea Partiers quickly recognize the value of organizing voting delegates to a state party convention.

At the Convention
It’s easy to imagine the power of being able to mass text your delegates on the floor at a convention.
What’s not so obvious is the shrewd use of a good digital platform in the workaday activities of a caucus at a convention. There are committee meetings to attend, lots of face-to-face deal making, seminars to attend, and speakers to listen to.

Examples:
A candidate nearly missed an important candidate registration meeting – a quick series of texts produced the candidate, finally walking into the meeting only 5 minutes late.

Delegates were able to report directly to the caucus via any channel they could choose. They could leave voice mail or text our platform’s phone line, they could send email or they could file a report from a web form. All methods of contact came across our ‘desktop’ in a steady flow and we monitored all communications by watching a single web page – no matter how a delegate contacted us, it was reported to us in a single stream on a single page. Voice mail? Click the play button to listen. Phone texts, emails and reports files via web form were all presented in their entirety right in the stream.

The single digital platform (a well-known platform) that delivered all these services cost less then $200 for September and October, so TPCC was not challenged in arranging for the services.

TPCC success laid mainly in caucus leaders, who are all Tea Party leaders, networking with other Tea Party leaders around the state. But the digital tech ensured that once a TP leader’s interest was aroused, he or she stayed engaged with the project and saw his/her members engaged and drawn in efficiently and speedily put to work for the caucus.

The caucus’ true brilliance shined forth not just in their use of tech, but in the human application of tech to draw delegates and others into real human contact and dialog (even if it was just an email) with caucus managers.

If effect, we used digital tools to deliver an array of human ‘concierge’ services to delegates, volunteers, and the ‘just plain curious’.
While the RNC shows no signs of having learned the basic lessons of digital success, even with a new social media guru on board, the CRP has shown hopeful signs with Chairman Brulte’s recent admission of the discovery that CRP’s main email box had 40,000 unanswered emails sitting in it – an admission that could only have meant that the CRP intends to remedy this.

It’s the one key lesson learned from Obama’s 2008 digital effort – when someone reaches out to you online, you reach back quickly with a human hand. Everybody thinks the key is tech. It’s not. The key is using tech to facilitate and enhance human contact. Tech helps you decide who it would be helpful to contact. That human contact is still essential.

The TPCC’s operation is the first conservative digital operation I’ve witnessed firsthand (after Kolski’s recent operation in CA AD45) that took this lesson seriously and compounded it into solid, active boots on the ground activism that genuinely influenced events.

The author is Digital Director for the Tea Party California Caucus.