This series reports on the backgrounds of the board members and officials of the ALRB. Part 1 is here.

With two vacancies, the board currently has three members: 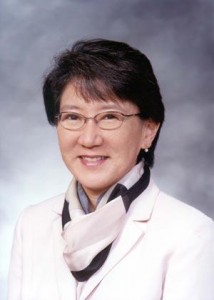 * Chairwoman Genevieve A. Shiroma, who has served on the board since 1999, was appointed by Gov. Gray Davis. She was reappointed by Brown in 2011.

* Cathryn Rivera-Hernandez was appointed by Davis in 2002 and re-appointed by Brown in 2013.

The general counsel, Sylvia Torres-Guillén, was appointed by Brown in 2011.

Executive Secretary J. Antonio Barbosa, who runs day-to-day operations, is appointed by the board and has held his position since 1992.

Part 2 of the series will be on ALRB Chairwoman Genevieve A. Shiroma.

Genevieve Shiroma, chair of California’s Agricultural Labor Relations Board, which oversees the relationship between farms and farm workers, grew up the daughter of a farm worker in San Joaquin County.

Staying close to her farm roots, according to AllGov California she earned her “associate of arts degree in math and science from San Joaquin Delta College in 1974.” After which she trekked only 70 miles away and in 1978 earned her bachelor of science degree in Materials Science and Engineering from the University of California, Davis, one of the state’s premier agricultural schools. She then joined CARB “as an air quality engineer. She worked there for 21 years, eventually becoming chief of the Air Quality Measures Branch.”

It was a natural step for her to chair the board itself, a post Gov. Gray Davis appointed her to in 1999. That position expired in 2005. In 2006, Gov. Arnold Schwarzenegger appointed her as a regular board member. And in 2011, Gov. Jerry Brown again appointed her as chair, making her the longest-serving current member of the ALRB.

The five-member board was created in 1975 to implement the Agricultural Labor Relations Act, which Brown signed into law that year. The board’s authority is divided between the five board members and a General Counsel, all appointed by the governor. The ALRA stipulates:

“It is hereby stated to be the policy of the State of California to encourage and protect the right of agricultural employees to full freedom of association, self-organization, and designation of representatives of their own choosing, to negotiate the terms and conditions of their employment, and to be free from the interference, restraint, or coercion of employers of labor….”

1. “[R]esponsible for the prevention of those practices which the Act declares to be impediments to the free exercise of employee rights…”

In 1998, voters first elected Shiroma to the board of the Sacramento Municipal Utilities District, where she currently is vice president. The board elected her its president in 2002, 2006 and 2010. Currently she serves as its vice president.

Someone in a political position not surprisingly gets involved in politics. In local Sacramento politics, even more than in California, the Democratic Party dominates. She is a sponsor of the Harry S. Truman Democratic Club.

In 2006, as president of the board Shiroma led the battle for Measure L, which would have allowed the public utility to annex some of Pacific Gas & Electric’s private property in Yolo County. It lost, 61 percent to 39 percent.

“SMUD’s initiative on the November 7 ballot would have allowed the muni to annex about 70,000 PG&E customers in Yolo County in Northern California. PG&E spent more than $10 million to defeat the annexation, while the pro-annexation campaign spent about $1 million.”

The pro-annexation campaign was called SMUD Customers Say YES to Low Rates, and was led by Shiroma and other SMUD board members. The Sacramento Bee reported on Jan. 2, 2006:

Ross is one of the most influential strategists in Sacramento. A strike organizer for United Farm Workers longtime President Cesar Chavez, Ross now is a registered lobbyist for the UFW, whose cases go before the ALRB.

(The Electric Utility Week and Bee articles no longer are online, but copies of them are in this document.)

Looking into the ALRB

One case involving the UFW now before the board concerns the farm employees of Gerawan Farming, one of the Central Valley’s largest growers of peaches, plums, nectarines and grapes. As I have reported in a series of articles, the workers have been fighting off unionization by the UFW.

Briefly, the Gerawan Farming workers have spent months protesting the UFW takeover attempt. The UFW has maintained that a unionization vote by the workers more than 20 years ago still is binding, and the workers must begin paying union dues.

The farm workers, led by farm worker Silvia Lopez, have insisted that the union has done nothing at all for more than two decades. Lopez personally led a petition drive for a decertification vote.

In response, the ALRB charged the company, Gerawan Farming, with circulating the petition among its employees. However, Lopez and other employees insist that they, not Gerawan, circulated the petitions. Based in part on the publicity from my articles, the ALRB conceded and granted the farm workers the right to vote on the union contract.

Considering Shiroma’s background and the controversies before the ALRB, I emailed her some questions. She graciously replied.

Here is my inquiry to Shiroma, with the verbatim questions and answers:

“I am submitting the following questions and will follow up with a phone call.

“This Los Angeles Times article (below) mentions that Fresno area farming owner Dan Gerawan filed a complaint against the Board for members having accepted outside income when the law prohibits ALRB board members from receiving outside income.

“Though the primary target of the complaint appeared to be Board Member Daniel Zingale, the article mentions that you were also receiving outside income.

“The LATimes said: ‘Gerawan said he has his own attorney general’s opinion affirming the constitutionality of a ban on board members working at outside jobs. He is using that opinion in pursuing his case against Zingale. Zingale is not the only Agricultural Labor Relations Board member with outside employment. Bustamante works as a public relations consultant, and Shiroma is an elected member of the Sacramento Municipal Utilities District.’

“I have these questions:

Q 1: ”Were you in fact receiving income outside of your ALRB position at that time? If so, please describe the type and amount of income. ”

Shiroma: ”No, I have not and do not receive outside income since first being appointed to the Board in 1999.”

Q 3: “And, if so, did you stop receiving that income subsequent to Dan Gerawan’s complaint? ”

Q 4: “Finally, do you feel that Gerawan’s complaint, and its impact on ALRB board members, could in any way prejudice a member about matters related to Gerawan or its employees?

Q 5: “Also, in these Board minutes

you and current board member Cathryn Rivera-Hernande voted to allow up to $50,000 to be spent for the legal defense of Board Member Zingale for having accepted outside income, in violation of state law (which both he, the Attorney General, and the governor admitted he was doing).

“In hindsight, as the Chairwoman of ALRB, then and currently, do you feel this was a proper expenditure of public funds?”

Shiroma: “Yes. Government Code 995 provides that, upon the request of an employee or former employee, a public entity shall(emphasis added) provide for the defense of any civil action or proceeding brought against him, in his official or individual capacity or both, on account of an act or omission in the scope of his employment as an employee of the public entity.”

Q 6: “Shouldn’t Zingale have paid for this himself?”

Q 7: “Finally, given that Dan Gerawan indirectly caused this expenditure approved by you and Board Member Rivera-Hernandez, do you still feel that the ALRB of Directors can act without bias in matters related to Gerawan?”