In the middle of the holiday season, when Americans for more focused on travel plans and gift giving than politics, Gallup released powerful new survey data showing Americans are far more concerned about the threat posed by “big government,” compared to business or labor.

In liberalism’s heyday of the 1960’s, fewer than half of Americans considered big government to be biggest threat to America’s future.  Today, it’s an astonishing 72%.  To reach such a peak, Americans across the board are concerned about the size, scope and intrusiveness of government, not just Republicans or libertarians (although Republicans are the most concerned).

Not surprisingly, Americans have grown significantly more skeptical of government as it has expanded during the Administration of Democrat Barack Obama.  The 2009 stimulus package, Dodd-Frank regulation of finance, Obamacare and revelations concerning NSA surveillance programs all contribute to rising concern about the role of government. 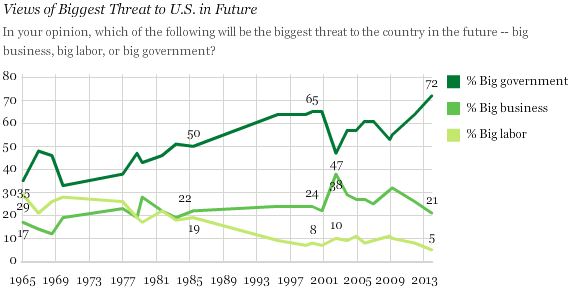