Maldonado Hangs Up His Quixotic Run For Governor – BuBye!

I seriously debated whether or not to write anything at all about the departure of Abel Maldonado from the race for Governor of California.  He really wasn’t much of a factor in the race, which is probably why he dropped out. 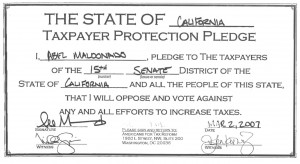 Maldonado violated this pledge to his constituents, voting for the largest tax increase in state history.

I guess I could write an entire column running through all of the problems with Maldonado.  But they say that a picture is worth a thousand words.  So here is an image of the pledge that then-Assemblyman Abel Maldonado made during his campaign for the State Senate — to the voters — that he “would vote against and oppose any efforts to raise taxes.”

I will keep this short and sweet.  Never mind Maldonado’s ideological inconsistency over his legislative career, he will forever go down in infamy as the deciding vote to pass over $14 billion in higher taxes on Californians (increases in the state income, sales and car taxes, and a cut in the child tax credit) and for using his tax vote to then put the terrible Prop. 14 on the ballot, which he happily told people the purpose of which was, in part, to reduce the role and influence of political parties in California.

Maldonado has character issues — and simply had no credibility with anyone.  How could he?  It’s no wonder his campaign caught no traction.

To be clear — I wish the former appointed Lt. Governor the best as he ends his quixotic run.  I discovered at a recent California Republican Party convention that Maldonado’s family produces a pretty good Pinor Noir — perhaps he should focus on making wine.

I can think of no better “period to put on the end of the sentence” than linking to this blog post I penned in March of 2008, which kind of says it all about Maldonado.