SACRAMENTO — It is very discouraging that something so clear-cut like the High-Speed Rail Authority’s misspending practices are embraced by state Democrats. 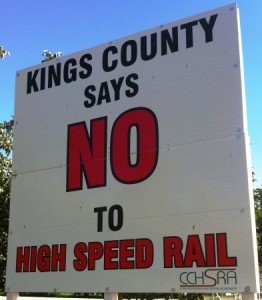 Remember that Proposition 1A told voters they would get a $45 billion complete high-speed rail system connecting San Francisco, Los Angeles, Sacramento, and San Diego. Now it’s a $68 billion “blended plan” between San Francisco and Los Angeles in which the first and last parts of the journey (the “bookends”) are not high-speed rail. Construction of a new high-speed rail segment is most immediately planned for bisecting or demolishing more than 1,100 properties between Merced and Bakersfield.

In an interview last week, Patterson said he introduced AB 1501 to protect California taxpayers from a hugely risky financial obligation that leaves them on the hook to pay billions of dollars in matching federal funds by the High Speed Rail Authority. Patterson’s bill would have prohibited the HSRA from spending any federal funds unless matching state funds are immediately available.

“It is simply irresponsible to go forward with high speed rail when we don’t legally have the matching state funds available,” Patterson said at the hearing. “The HSRA has already spent $180 million in federal funds without batting an eye and is determined to go forward without regard for financial accountability.”

The State Building & Construction Trades Council of California appeared at the hearing in opposition to AB 1501. The labor union brags on its website, “We got it right. We elected the right governor and the right legislative leaders.”

“It is with that same sense of leadership and responsibility, that Governor Jerry Brown continues to move forward toward the construction of America’s first high speed rail system,” the labor union wrote in February. “Likewise, the State Building Trades’  advocacy in favor of the project remains as strong as ever.”

Project Vote Smart, supported by Follow the Money, reports transportation unions have made political contributions of $12,800 to the Assembly Transportation Committee Chairwoman, Assemblywoman Bonnie Lowenthal, D-Long Beach. Lowenthal has received a total of $77,450 from labor unions.

Patterson received $2,500 from the transportation sector, and $21,450 from agriculture.

Aaron Fukuda with Citizens for High-Speed Rail Accountability, testified at the hearing, and reminded legislators that the group is not trying to kill high-speed rail, but wants the rail authority to comply with Proposition 1A, and all applicable laws, including recent court rulings.

Fukuda was critical of the plan which shifted from “fiscal responsibility, pretty good engineering and science,” to the “economic fad” of turning the rail project into a green project and union job creator.

“It does not yield high speed, and will do more environmental damage,” Fukuda said. He warned, if allowed to continue, the rail project will end up taking funds from other programs, and leave others out of jobs.

Fukuda reminded lawmakers they have repeatedly been misled on many issues by the rail authority, including insisting that the project had to begin construction in 2012 — which has not happened. And, there still are no private investors, which the rail authority has promised all along.

“The only mechanism the Legislature has to control is the purse, and these are the public’s funds,” Fukuda said. “A fiscal disaster will be harder to undo than to prevent.”

Diane Friend testified on behalf of the Kings County Farm Bureau, and more than 1,000 family farmers, and the farm workers employed by them. “There are more cows than people [in Kings County],and people take care of these cows,” Friend said. 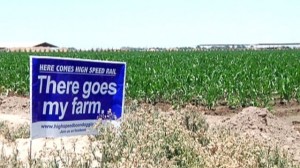 According to the Kings County Farm Bureau, encroachment permits are needed by the rail authority for construction.  “Thus far, Kings County has denied such permits due to the failure of the authority to ensure its proposals are consistent with the county’s general plan and the needs of public health, safety and welfare.”

The 11-4 vote came after testimony from Patterson and others, presenting staggering facts, amounts of money already spent, and planned spending.

Patterson requested reconsideration for the bill keeping it technically alive, however the message from Assembly Democrats was loud and clear.

(photos from CHSRA and KCFB)