California can catch the 2014 Republican wave

Every election is an opportunity for people to decide whether we are on the right track, or if we can do better

The latest polling from the Wall Street Journal and NBC News finds the national mood to be remarkably similar to that which that produced a Republican House of Representatives and sent Nancy Pelosi back into the Minority Leader’s office in 2010.  By some measures, it’s even more favorable. 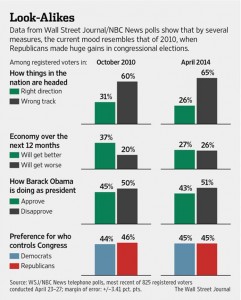 Is the nation headed in the right direction?  65% of Americans today say “no.”  This is 5% stronger than in October 2010.  Will the economy improve or worse in the next year? The public is split.  How is Barack Obama doing?  43% approve and 51% disapprove. About the same conditions as in 2010.

California observers will be quick to point out that in 2010 while Republicans were gaining ground in most states, Jerry Brown won back the governor’s office for the Democrats and his party secured every statewide office.

Why the difference? Two reasons.  First: it turns out that California wasn’t alone in seeing Democrat success even in an otherwise strong year for Republicans.  New York, Massachusetts, Connecticut and Illinois saw similar wins for the Democrats.  The most heavily Democratic states still elected Democrats

Second: candidates matter, and none more so than the top of the ticket.  Since 1982 Republicans have won the governor’s office 5 out of 8 times (including the 2003 recall election).  It’s a better win rate than for any other statewide office because the attention focused on governor candidates allows them to define themselves.  Downticket races for lower visibility offices tend to become party preference votes.

1994 and 2010 were both big years nationally for our team.  In 1994, Californians also elected Republicans to every statewide office but one. But in 2010, Democrats won them all.  The key difference: Governor Pete Wilson’s strong performance leading the top of the ticket ensured the rest of the statewide team also benefitted from that year’s Republican wave.  Simultaneously in heavily Democratic New York, a solid campaign by a little known State Senator named George Pataki (R) combined with the national Republican wave to defeat Gov. Mario Cuomo (D).

Today, California is in serious need of some balance in state government.  While Californians are suffering with the nation’s highest poverty rate, the legislature is busy passing resolutions recognizing “Compost Awareness Week,” funding a train that few people want, and pretending our own expensive cap and trade law is somehow going to impact the climate of the planet.  Some members of the majority party are accused of illegal freelancing with lobbyists and one too many international arms dealers.

Sending more Republicans to Sacramento will mean a more balanced discussion, and policies that better reflect the state’s greatest needs: economic competitiveness to spur job growth and stem the flight of employers from our state, education reform that gives parents and students more choices, and reining in the frivolous lawsuits that are killing the small businesses most essential to creating jobs.

In my campaign for Lt. Governor, we’re making the positive, forward-looking case for reform in each of these areas, and for ensuring all voices are heard in Sacramento.  Equally important, we are building an extensive and talented team to unite California Republicans and challenge a Ruling Party in Sacramento that has lost its way.

Statewide success requires a strong wave, and strong candidates.  The wave is building.  In two weeks, we’ll have our candidates, and I’m looking forward to being part of a new team that holds the potential restore balance and set the right priorities to move California ahead.

Ron Nehring is a candidate for Lt. Governor.  He served as Chairman of the California Republican Party from 2007 to 2011.  For more information visit www.RonNehring.com.