Several months ago when my friend Peter Kuo asked me to assist with his State Senate race in the heavily democratic District 10, I never imagined I’d be asked how to respond to claims that he talked to someone who had died 2 years ago, however that very thing happened yesterday.

We all remember the 1999 drama “The Sixth Sense” where Haley Joel Osment’s character saw dead people, however even in the movies he never talked to them (except for Bruce Willis.) Now Assemblyman Bob Wieckowski is claiming his opponent Peter Kuo, is talking to them!

Kuo advanced to the November election in the South Bay Area senate district last Tuesday riding momentum against SCA 5 and general disdain for Sacramento. Apparently Asm. Wieckowski felt a sense of urgency to put out a press release differentiating himself from Kuo on education. Afterall, Wieckowski ought to be a little defensive that much of the billions California has spent on education ends up outside of the classroom and has delivered dismal results for California students. California ranks among the bottom in the nation on educational achievement, and Wieckowski’s party has controlled those spending plans for decades. Kuo has hammered democrats on our national ranking in education. To respond Wieckowski cites an interview Kuo supposedly gave with someone who died two years ago in this release: 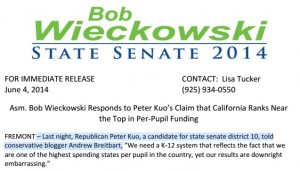 That’s right, Bob Wieckowski claimed that Peter Kuo gave an interview to Andrew Breitbart just days ago, the pioneering blogger who passed away two years ago. Peter’s campaign manager called me today asking me: “How do we reply to this? Peter never even had a chance to meet Andrew Brietbart…I wish he had!” I was obviously lost for words, and quite frankly still am. Of course if you are in a ruling party and your policies continually deliver the opposite results you claim to be your priorities I guess you start to grasp for anything, I just never imagine it would be that your opponent talks to dead people.

RIP Andrew Breitbart, glad to see your impact is still being felt.