How Labor Money Undermines the Financial Literacy of California’s Legislators

“In an era when we aren’t going to have tax increases, figure out how to be more efficient spending the money we’ve got, and the Republicans can help you do that if they’ll get off the philosophical cant about stuff and help you make things more efficient. They actually culturally know more and occupationally know more about efficiencies than Democrats typically do.”
–  California Treasurer Bill Lockyer, Democrat, addressing the state legislature in 2010.

What was Lockyer thinking? As one of the most plain spoken and financially astute politicians California’s got, and as someone who has been around the capitol for decades, he certainly knows a thing or two about Republicans and Democrats. Did Lockyer make a fair generalization? And if so, what are the causes, and what are the consequences?

To explore the basis for Lockyer’s assertion, the biographies of California’s state legislators might be instructive. How do Republicans and Democrats differ in terms of what they did before they became politicians? It isn’t hard to dig this information up, just go to the websites senate.ca.gov/senatorsand assembly.ca.gov/assemblymembers and click on the “About” or “Biography” tabs. If that doesn’t reveal sufficient information – and it usually does – do a Wikipedia search on the member. While these results are obviously open to interpretation, even the most biased interpreter must admit they are amazingly skewed. 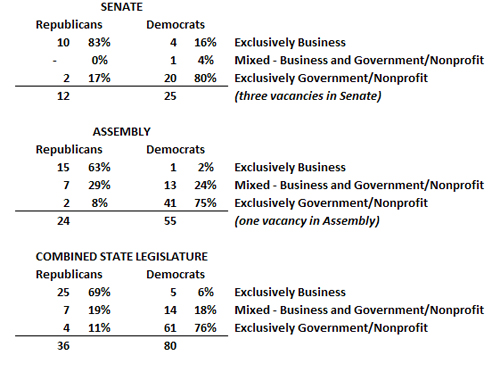 To summarize and validate Lockyer’s observation based on the above data, one may see that 76% of California’s state legislators who belong to the Democratic party have NO experience in business. By contrast, 69% of California’s state legislators who belong to the Republican party – apart from serving as local elected officials prior to taking office as Senators or Assemblymembers – have NO experience in Government. Roughly the same proportions in both parties, 18% of Democrats and 19% of Republicans, have mixed professional experience, having worked in government and the private sector.

It isn’t necessarily Democratic dominance of California’s state legislature that is California’s biggest political problem – it is the background of these Democrats. Back in the 1950′s and 1960′s there were plenty of Democrats, so called “Pat Brown” Democrats, who worked with Gov. Brown Sr. to build freeways, bridges, power plants, and the finest system of water storage and conveyance the world had ever seen. Those same Democrats cooperated with Republican Governor Reagan a few years later to build the finest public university system in the world. The opportunities available to California’s middle class were unrivaled. What happened to these Democrats?

The problems began in the 1970′s when public sector unions were allowed to form. Steadily acquiring political power through automatic dues deductions, they used taxpayer’s money to lobby for the interests of government workers instead of the interests of the people they serve. Business interests, which were – and still are – evenly balanced between Republicans and Democrats, became marginalized. Increasingly, business candidates started losing races to candidates backed by government unions. Almost invariably, unions backed Democratic candidates. The more powerful these union backed candidates became, the more laws they enacted to further consolidate their power. Today government union rule in California is absolute – the fact they’ve backed Democrats is almost incidental. Big business interests either keep their head down, or they’ve sold their souls to cronyism, becoming the corrupt junior partners of a unionized government.

The tragedy of unionized government, though, is not merely that they have taken over California’s state legislature and nearly every city, county and school board in the state in order to pursue their membership’s interest above the public interest. It is that most elected officials no longer understand business. These union anointed elected officials come from government agencies, union bureaucracies, nonprofits, activism, and public education. They are carefully chosen by union leadership whose career imperative has never been to balance a budget, make a payroll, or convince a customer to voluntarily purchase a product so they could earn a precarious profit.

California’s lawmakers, to the extent they are elected with the support of public sector unions and to the extent they lack business experience, not only face a conflict of interests every time they have to deal with a reform that threatens the power of the unions. They are also simply less qualified to even understand the financial and operational realities that apply in any organization, large or small. They are in over their heads.

Finally, one must take issue with Lockyer’s reference to the “philosophical cant” of Republicans. Because it is the philosophy of government unions – informing a blithe indifference to practical economics, cruel disregard for the private sector middle class, relentless harassment of small business entrepreneurs – it is their philosophy that cripples the aspirations of hard working Californians.

Ed Ring is the executive director of the California Policy Center