California State Senator Hannah-Beth Jackson, D-Santa Barbara, authored a bill this legislative session to ban offshore oil drilling from an area of state waters in the Santa Barbara Channel known as Tranquillon Ridge. Jackson claimed her bill would do away with a “loophole” in state law. 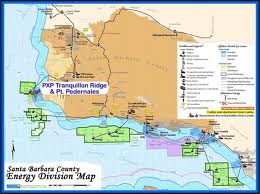 But there is a hitch — Following Jackson’s time in the California State Assembly 1998-2004, prior to being elected to the State Senate in 2012, she lobbied to get an off shore drilling project approved off the coast of Vandenberg Air Force Base. Jackson teamed up with Linda Krop, the chief counsel of the Environmental Defense Center to try to get the drilling project approved.

Jackson is an attorney.

Another oil company, Sunset Exploration, proposes to tap into the same oil formation, but from onshore. The land-based proposal does not rely on any existing offshore oil and gas infrastructure in the marine environment, or techniques such as hydraulic fracturing. Instead, Sunset Exploration would build a small land-based drilling facility on Vandenberg Air Force Base in Santa Barbara County.

The project means $500 million in tax proceeds to Santa Barbara county schools and county government over the life of the project, and more than $2 billion in royalty payments to the State of California.

And, Sunset Exploration would provide more than 600 high paying jobs.

Interestingly, in 2007, while Jackson was in between legislative offices, Tranquillon Ridge was designated as a Marine Protected Area because of its “sensitive marine ecosystem.”

“The California Coastal Sanctuary Act of 1994, authorizes the State Lands Commission to enter into a lease for the extraction of oil or gas from state-owned tide and submerged lands in the California Coastal Sanctuary if the commission determines that the oil or gas deposits are being drained by means of producing wells upon adjacent federal lands and the lease is in the best interest of the state,” the bill language reports. Jackson claimed this is the loophole. “This bill would delete this authorization,” Jackson said.

According to Andy Caldwell, President of COLAB, the Coalition of Labor Agriculture & Business, Jackson and Krop won’t talk about who hired them, or how much they were paid, but acknowledge they supported the project because the oil company was willing to give an end date to the operation of four off shore platforms.

The oil company was also ready to give up their Gaviota processing plant and a proposed housing project near Lompoc.  According to Caldwell, also a radio talk show host and a long time resident of the Central Coast, the extensive and expensive deal was the right thing to do because the price was right.

But a loophole in state law left Tranquillon Ridge, which extends into state and federal waters, with reserves that are currently being tapped in federal waters from Platform Irene, uniquely vulnerable to offshore drilling. Senate Bill 1096 repeals this loophole, found in Public Resources Code 6244.”

Jackson’s website does not indicate she was involved in the Tranquillon Ridge oil project. So what was she doing during 2005 – 2012?

Zoominfo reported Jackson’s The Institute for the Renewal of the California Dream , on Dec. 3, 2012:

“Hannah-Beth Jackson Co-founder and president of two non-profit organizations, Renew California (formerly IRCD) and Speak Out California, Hannah-Beth is committed to advancing a positive and responsible dialogue in California politics. Prior to this she served in the California Legislature from 1998-2004, representing the 35th Assembly District. She was one of the legislature’s leading advocates of environmental protections, women’s rights and civil liberties earning a reputation as a strong and effective advocate for justice, fairness and opportunity regardless of age, gender or ethnicity. In November 2008, she came within a hair’s breath of winning the 19th State Senate district.”

The Political Reform Act of 1974 regulates lobbyist’s financial disclosure and lobbying practices related to the legislature and state agencies. The Act governs disclosure of political campaign contributions and spending by candidates and ballot measure committees, and sets ethics rules for state and local government officials that impose strict limits on decisions or votes that affect the official’s financial interests.

Since Jackson has authored legislation on an issue she once lobbied, the FPPC should require financial disclosure and lobbying activity reports from her. And Santa Barbara voters and constituents deserve to know how why Jackson lobbied for one oil drilling project, before she ran legislation against another in the same oil formation. And they should ask why Jackson was supportive of one drilling project in the area, shortly thereafter designated “sensitive marine ecosystem.”

Unable to locate public records showing how much Jackson was paid to move the project, nor how much direct compensation the Environmental Defense Center was paid to help rewrite state law and lobby for the oil project, I have sent a request for this information to the FPPC.

“Even the slightest chance of an oil spill in a Marine Protected Area far outweighs any potential benefit to the state,” Jackson said on her website. “The bill had the support of dozens of environmental groups, including the Environmental Defense Center, its sponsor, but faced significant opposition from the oil industry. Over the years, oil companies have made numerous attempts to tap into Tranquillon Ridge’s offshore reserves from state waters. Since 2003, an oil development proposal has been pursued by Sunset and Exxon to drill into Tranquillon Ridge reserves from an onshore location at Vandenberg Air Force Base. Slant drilling from onshore into offshore waters raises significant concerns about possible oil spills, impacts on marine life, air and water pollution, and contributions to global climate change.”

Ironically, the Santa Barbara County Supervisors also favored the original drilling proposal. And then they opposed it and endorsed Jackson’s SB 1096 to eliminate the provision in state law that would allow the new project to move forward if and when subsequent approvals were obtained by the Board and several state commissions.

Jackson’s original project, Tranquillion Ridge, didn’t offer much in the way of revenues to Santa Barbara County or local schools. The second project was infinitely more generous to local government finances, but that was the project Jackson tried to kill with her legislation.

The bill was killed in the Assembly last week, 29-36. However, Jackson vowed to continue pursuing a way to kill the oil project under the guise of environmentalism. “I’m disappointed in what happened tonight, but remain committed to protecting this area of our Santa Barbara coastline from the impacts of new offshore oil drilling for the long haul,” said Jackson in a statement. “I will continue to pursue avenues to protect Tranquillon Ridge, which inspires us with its beauty and biological diversity, and helps drive our local economy with tourism and hospitality jobs and thousands of visitors to our area.”

This entry was posted on Wednesday, September 3rd, 2014 at 7:44 am and is filed under Blog Posts.