“What a salesman,” he said, mockingly. “I guess that’s what you learned … selling that stock that went south.”
– California Governor Brown, to challenger Kashkari, during televised debate Sept. 4th, 2014 (ref. SF Gate)

If anyone wants to know what the theme of Governor Brown’s attacks on GOP candidate Neel Kashkari is going to be over the coming weeks preceding the November 4th, election, his remarks in their debate last week would probably provide accurate clues. At least a half-dozen times, Governor Brown smeared Kashkari with accusations of being beholden to his banker friends on Wall Street. You know, those guys who shorted the investments of millions of small investors and turned America into a debtors prison? The sharks at Goldman Sachs? The banker bullies who took taxpayer funded bailouts and then collected billions in personal bonus checks? It will play well.

But Governor Brown is the king of taxpayer bailouts. Because pension funds, the biggest players on Wall Street, are getting bailed out by taxpayers. And over the corrupt courts who deny activists their chance to get pension reforms onto the ballot, or deny voters who have passed pension reforms the chance to enforce them, Gov. Brown presides. Over California’s obscure but powerful Public Employee Relations Board, an entity that consistently overrules common sense details of proposed pension reform and compensation reform, Gov. Brown presides. And before the billions in taxpayer sourced public sector union dues that deluge every policy debate, every press briefing, every lobbyist’s bank account, or politician’s war chest, Brown bows down, beholden, and says – “your wish is my command.”

California’s state and local governments owe an estimated $1.0 trillion dollars, about half of it in the form of unfunded retirement healthcare and pension liabilities for government workers, the other half for bonds and short-term borrowing to finance projects whose costs were inflated by unions, or deficits whose root cause is government union greed. Every dime of that debt benefit a public sector union agenda; every dime of it was facilitated by bankers. Unions and the bankers worked together to con voters into approving the myriad measures that lead to this fiasco, or, even more likely, pressured beholden politicians behind closed doors into enacting them without voter approval.

And Governor Brown presides over this entire, gigantic, exploitative joint venture between government unions and financial firms. Who will bail out California’s state and local governments from a trillion dollars of debt?

Who does Brown think will pay for the bailout, when government worker pension funds report too many of their investments were comprised of “that stock that went south?”

Who does Brown think benefits from obscenely inflated asset prices that make life unaffordable except to the super rich? Pension funds benefit, of course! Without asset bubbles, the pension funds would collapse overnight, just like subprime mortgage derivatives did back in 2008. The same corruption. And the same victims.

What a salesman. What a hypocrite. Governor Brown, the taxpayer bailout king. 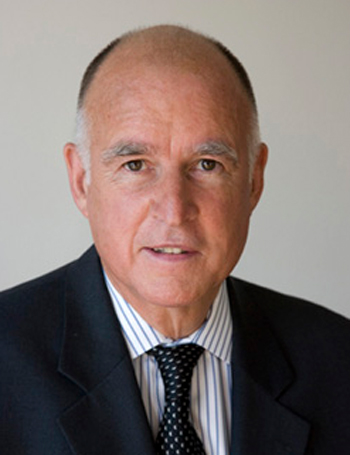 Across California this November, voters will decide on local tax measures promoted as necessary to “keep teachers in classrooms,” and to “protect public safety,” when invariably the amounts being raised are roughly equivalent to the amounts by which pension funds are planning to raise contributions. CalPERS intends to increase their required annual contributions by 50% over the next five years. CalSTRS needs an additional $5.0 billion per year, or more. Jerry Brown is no dummy. He can connect the dots, but he’d better make sure the voters don’t.

The pension bankers and their union allies hide behind rhetoric that is transparent in its falsity, with a press that is either too innumerate, too busy, too biased, or too scared to challenge any of it. CalPERS claims their investments help California’s economy, when 90% of their investments are made out of state, and 16% of their retirees live out of state. Union officials claim their pensions are “modest,” citing “averages” of $25,000 or less, but not revealing how those averages include millions of people who only worked a few years for state or local government and barely vested a pension. The truth: For recent retirees who benefit from the “enhancements” of the past few years, the average non-safety pension plus benefits in California is over $60,000 per year; for safety retirees it is about $100,000 per year.

And Brown leads this chorus of deceit with abandon, claiming last week that thanks to his pension reform (AB 340), “government employees will pay 50% of the normal contribution,” conveniently neglecting to explain the “normal contribution” is deliberately underestimated via using hyper-optimistic rates of return when making the calculation, and ignoring the fact that the unfunded liability (caused by years of insufficient “normal” contributions) requires a much larger “unfunded contribution,” for which public employees, their unions, and the politicians like Brown who are controlled by the pension bankers and the unions, expect taxpayers to bear 100% of the cost.

Bond issuers earn billions on fees to enable California’s state and local governments to accumulate unsustainable debt. Pension funds pay billions each year to financial firms to speculate on global markets in a desperate attempt to prolong the nominal solvency of unsustainable government pensions. And when these bills come due, and when the investment returns fail to meet expectations, taxpayers fund the bailout.

Neel Kashkari may or may not have some explaining to do. But Governor Brown, the bailout king, has no business calling anybody, anywhere, a tool of bankers.

Ed Ring is the executive director of the California Policy Center.

This entry was posted on Tuesday, September 9th, 2014 at 8:07 pm and is filed under Blog Posts, Commentary.