Swearengin Faced With Meaningful Veto Opportunity: Will It Happen Before the Election?

News media has portrayed Fresno Mayor Ashley Swearengin – a Republican – as a candidate with potential to defeat Democrat Board of Equalization member Betty Yee in the November 4, 2014 election for California State Controller. But as she seeks support from California voters in the political center, Swearengin faces criticism from some conservatives.

FlashReport’s John Hrabe has criticized Swearengin’s apparent tendency to conduct public business without the knowledge of the public. Among several examples he cites is her role behind-the-scenes in pushing for a union monopoly on construction contracts for the California High-Speed Rail project.

That’s why it’s fascinating to watch the Fresno City Council as it moves to repeal a 14 year-old “Fair and Open Competition” ordinance that prohibits the city from requiring its construction contractors to sign a Project Labor Agreement with labor unions as a condition of work. On August 28 the city council voted 4-3 on its first reading to repeal the ordinance. The second and final vote may be scheduled as early as the September 25 meeting.

If the majority remains committed to repeal the Project Labor Agreement ban, Mayor Swearengin will have the opportunity to veto it. It will be a test: surrender to the unions on the basis of pragmatism to get access to more government funding; defend the principles of fiscal responsibility, local control, and the concept of structural protection (“the restraints imposed by federalism”) in a constitutional republic; or figure out a way to evade any tough decisions before the November 4 election.

Money from the State: The Motivation to Repeal a Taxpayer Protection in Fresno

California state and local governments rarely repeal laws. They prefer to impose laws. So why is an ordinance now proposed for repeal in the state’s fifth most populous city?

Don’t bother going to the Fresno City Council’s website to find a staff report or other information about why this repeal is necessary, because nothing is posted. City staff argued at the August 28 meeting that maintaining the ordinance banning union Project Labor Agreements could jeopardize the city’s State Revolving Fund Loan with the California State Water Resources Control Board for a Recycled Water Distribution System.

Union lobbyists created this dilemma for the City of Fresno by bluntly using the state legislature to suppress any defiant locally-based challenges to their political agenda. In 2011 and 2012, the State Building and Construction Trades Council of California was infuriated by the high-profile accelerating movement throughout the state to enact “Fair and Open Competition” policies that ban government-mandated Project Labor Agreements on local public works projects.

The City of Fresno subsequently joined the cities of El Centro, Carlsbad, El Cajon, Oceanside, and Vista in a lawsuit challenging these two bills and a similar bill (Senate Bill 7, signed into law in 2013) that cuts off state funding to any charter city that establishes a policy that deviates from state “prevailing wage” law. The six charter cities argue that the State of California may not directly or indirectly interfere, through legislation, with the constitutional authority granted to charter cities and their citizens to govern their own municipal affairs.

In August, a San Diego Superior Court judge ruled against the City of Fresno and other charter cities, stating that “The Court empathizes with the dilemma framed by Petitioners; however, given the totality of this record, the Court finds that, if Petitioners desire to benefit from the receipt of state funds, their local concerns must yield to Respondent’s policy objectives.”

Not a Good Omen: Fresno Mayor Was a Catalyst for Union Control of High-Speed Rail

While union lobbyists were at the state legislature neutralizing local resistance to their agenda, they were going on the offense in the executive branch at state and local governments. For reasons still to be publicly revealed, obscure Fresno-based appointed boards and quasi-public groups interacted with federal and state officials to develop and implement a Project Labor Agreement for what will be the most expensive public works project in human history.

It was a tremendous victory for union officials, who remain chief backers of the project. There was never any public deliberation or a public vote on the Project Labor Agreement. It was handled internally by the California High-Speed Rail Authority as an administrative matter.

The only elected official identified to date as involved in the scheme was Ashley Swearengin. On June 19, 2012, Mayor Swearengin sent a letter to the US Secretary of Transportation asking for federal assent for a Project Labor Agreement on the high-speed rail project. 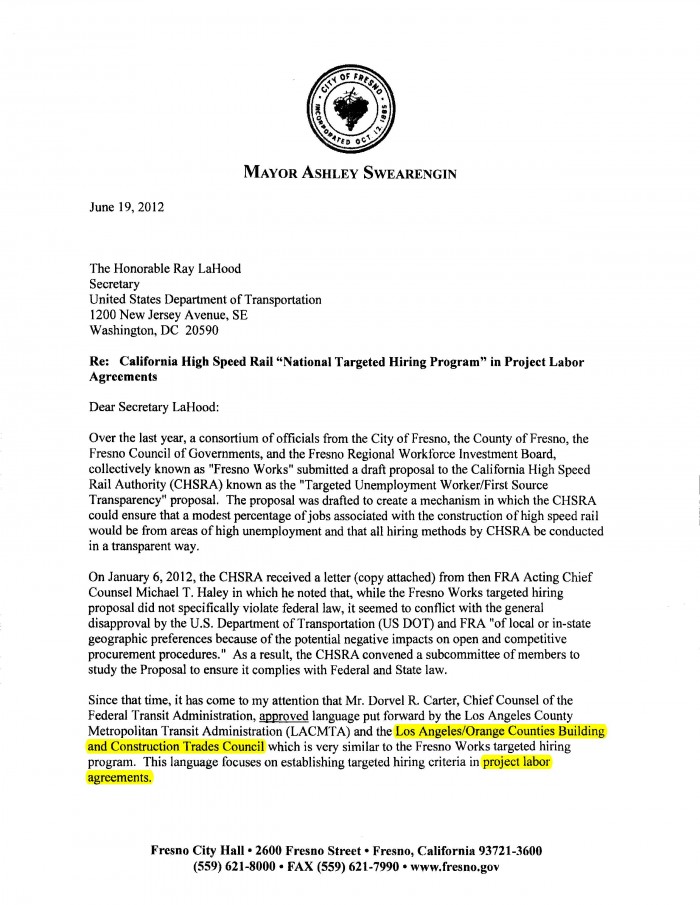 Once that was granted, the plot moved forward, only revealed to the public when an addendum to the bid specifications for the first construction package was issued in December 2012.

This is not a good omen for the prospect of a veto against the repeal of the city’s Project Labor Agreement ban.

The charter and municipal code of the City of Fresno outlines the veto authority of the mayor on legislative matters. Mayor Swearengin can veto the repeal of an ordinance, and five votes are needed on the city council to override her veto. If she vetoed a repeal of the Project Labor Agreement ban, the city council would lack enough votes to override it.

And why would a veto be meaningful? If the City of Fresno surrenders to the state’s punishment and repeals a policy to manage its own municipal affairs, it surrenders local government authority (“home rule”) established under the California Constitution for cities that adopt their own charters. It indicates that local governments are willing to let the state exercise its power against them through conditions established as a condition of state funding. It would lead to further erosion of the ability of charter cities to be fiscally responsible in local governance.

Obviously this power exercised by the state through SB 922, SB 829, and SB 7 makes local governments vulnerable to all sorts of costly and intrusive legislative whims. It deserves to be resisted, vigorously, with dramatic action and strong words worthy of a true leader of principle. A veto would achieve this objective.

Is such a strong action likely?

An alternative for the mayor is letting the repeal stand because the city needs state money for a water recycling project. Or she can argue that she lacks the authority to veto the repeal. Perhaps she can convince the city council to enact the repeal as an emergency ordinance, so she can’t veto it. Or she could ask staff to delay the vote on the second reading so that everyone has enough time to ruminate on the issue, preferably through November 4.

June 19, 2012 letter from Fresno Mayor Ashley Swearengin to US Secretary of Transportation Ray LaHood seeking an imprimatur for a Project Labor Agreement on California High-Speed Rail