Sacramento Mayor Kevin Johnson and the Sacramento Bee appear to be trying to gin up race issues in Sacramento in order to win a campaign. 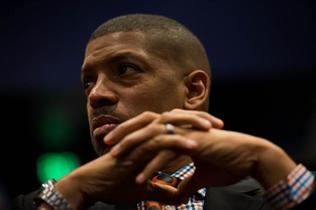 Kevin Johnson, from the Sacramento Bee

The front page of the Forum/Opinion section featured a half-page photo of Johnson, above an op-ed by the Mayor, who said he hopes the recent alleged police racial violence in Ferguson, MO doesn’t happen in Sacramento.

This was the ugliest, and most irresponsible yellow journalism, I’ve seen in a long time. And this was an attempt to distract from Mayor Johnson’s actual performance issues.

In what is no coincidence, these two stories appeared in this carefully crafted campaign move to stage a strategy for Mayor Johnson: As an African America Mayor, he appears to be ginning up race relations in Sacramento in order to then insert himself into the middle, as the only guy who can fix it, and only as a strong mayor.

In a “strong mayor” city, the elected mayor has the powers and authorities that otherwise are the responsibility of a hired city manager. It will give Sacramento’s mayor “powers beyond any city executive in California.” The mayor would be the sole boss of the city’s hired city manager. The city manager under the current system reports to the entire city council.

In a “weak mayor” city, by contrast to a “strong mayor” city, the mayor’s powers are similar to those of any member of the city council.

Johnson may want to be Chief Executive of Sacramento, but many feel he hasn’t earned the title, or the actual role. I closely covered his 2008 race, and have since observed as Johnson has lost the faith of many Sacramento voters during his Mayoral terms. He did what so many newbie politicians do: Johnson either was insincere about his true intentions, or he can’t handle the job, and violated his very clear campaign promises.

I interviewed Johnson many times during that 2008 campaign, and recorded his many criticisms of the city council and the former mayor: “City Hall has no accountability, when nearly every city department overspent their budgets, with no repercussions,” I reported Johnson saying in September 2008 in The Sacramento Union. I also reported that Johnson was critical of a lack of waterfront development on Sacramento’s two rivers while West Sacramento developed, and grew exponentially. He was critical of sweetheart deals with favorite developers in downtown, and of these same developers’ special subsidies along the K Street Mall.

However, after a couple of years in office, as I became critical of Johnson’s broken campaign promises, and his focus on the Sacramento Kings and arena issues, he stopped returning my calls. My biggest criticism was Johnson’s violation of his promise not to seek to become a Strong Mayor, or push for a new arena without voter support.

While Sacramento faces $2 billion in long-term unfunded pension liabilities, and gross long-term unfunded debt, Johnson instead made the arena deal and strong mayor plan his priority. He ignored the city’s decrepit infrastructure, and failing sewer system, instead following his plan to grow Sacramento into a “world class city.”

The Executive Mayor plan has been modified four times. The idea of a strong mayor has worth; however, it is Johnson as the Strong Mayor that most people object to. His time as Mayor is not what he promised. He has instead spent his political capital on professional sports arenas and personal power.

“The Checks and Balances Act of 2012″ proposed the mayor as chief executive, responsible for the budget proposal, who chooses a city manager, and no longer will have a voting position on the city council. A Sacramento judge ordered its removal from the ballot.

The 2014 version, “Measure L,” also known as the “Sacramento Checks and Balances Act of 2014” – will transition Sacramento from a council-manager system to a “strong mayor” and council system, according to Ballotpedia. If Measure L passes, Sacramento’s city manager will be replaced by the mayor as the city’s chief executive.

Johnson has pushed several times for this major change to the city charter to make an “Executive Mayor,” to not just be one of nine votes on the City Council. But he hasn’t been able to get enough support from earlier councils or the voters.

Johnson has also attempted several times to shoehorn in a new, publicly subsidized sports arena in Sacramento, finally succeeding in 2013, despite significant opposition from the taxpayers responsible for footing the bill. But not without challenges.

In 2011, Johnson launched “Think Big Sacramento,” a non- profit with the goal of developing a new arena for the Kings in Sacramento. Purporting to be an independent organization, Think Big engaged in extensive public relations efforts extolling the purported public benefits of a publicly financed arena in Sacramento. About that same time, a new City plan for a publicly funded arena was unveiled in the old downtown Railyard site.

Reporters discovered that Think Big’s purportedly independent efforts to promote a publicly-funded arena were funded by unreported “behests” under the Mayor Johnson, which ultimately traced back to the Sacramento Kings organization. Mayor Johnson had not previously reported these behests as required by law, and was fined by the Fair Political Practices Commission $37,500 for his failure to report the behest payments.

Johnson realized two years ago he could not have both issues at one time. In 2012, Johnson had big plans; he wanted a new sports arena, and he wanted to be an Executive Mayor.

But after several failed attempts with both, and the “Think Big” nonprofit troubles, Johnson finally opted for one at a time. Last year, in 2013, Johnson finally got his arena, albeit with creative math, and highly dubious tactics. And, despite several ongoing lawsuits, Johnson and his team have proceeded as if the arena is a sure thing, already demolishing the downtown shopping mall in the proposed arena location.

In November, his Strong Mayor initiative will be on the ballot as Measure L. The strategy is clever – give the sports fans a new arena, then ask them to approve a Strong Mayor plan.

“Politics are dirtier and more physical than the NBA,” said Johnson in a 2008 Los Angeles Times story. Now Johnson would have us believe race is what’s driving Sacramento politics — if that was the case, how did Sacramento elect Johnson the same year the United States elected its first African American President?