The general counsel of the Agriculture Labor Relations Board went to court in April to impose a union contract on Gerawan Farming employees, without proper input from the farm workers, and without counting the ballots of a United Farm Workers union decertification election, held in November 2013. 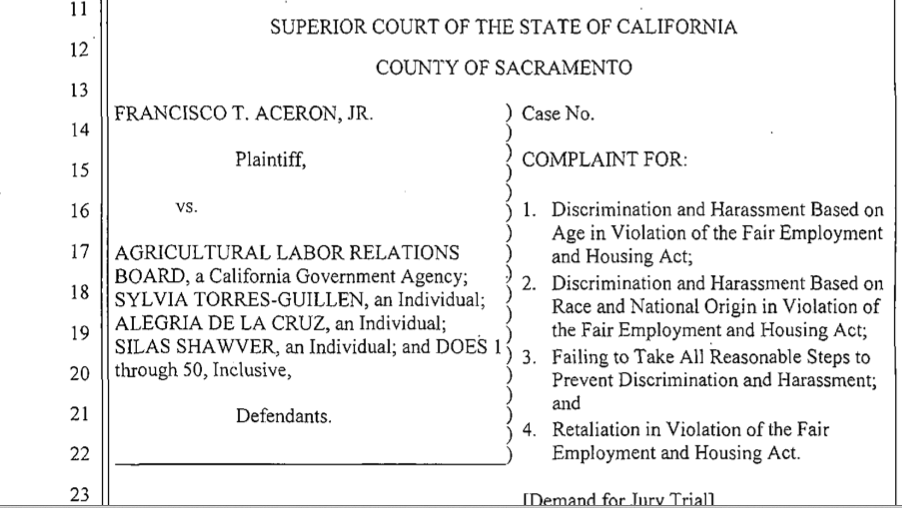 And now,  an attorney with the ALRB has filed a discrimination and harassment lawsuit against ALRB General Counsel Sylvia Torres-Guillen, and ALRB attorney Alegria de la Cruz.

Aceron has been employed with the ALRB since year 2000 as Legal Counsel. By 2003 Aceron was promoted to Assistant General Counsel ll, a position he held for more than 11 years, the complaint says.

But by 2011, that all began to change when Gov. Jerry Brown appointed Torren-Guillen General Counsel.

“By late 2011, many of Plaintiff s older colleagues had been forced out of their long term positions at the ALRB, and replaced by new attorneys with 5 or less years of legal experience, all under the age of 40,” the complaint alleges.

Aceron’s lawsuit identifies many ALRB legal employees who were allegedly forced out of the agency by Torres-Guillen and De La Cruz.

“On November 6, 2012, Plaintiff received his first performance evaluation under the new supervision,” the complaint says. “Despite all the work that Plaintiff had performed during the past year, in litigating complex cases and closing out older cases of over 20 to 30 years, including receiving the successful May 30, 2012 San Joaquin Tomato Growers, Inc. published Board decision that awarded a make whole amount of over $800,000 to over 700 farm workers, the largest financial make-whole award received by the ALRB office in memory, the evaluation contained only criticisms and failed to reflect any of Plaintiff s accomplishments.”

This isn’t the first legal snafu for the ALRB.

The ALRB, Torres-Guillen, and Alegria De La Cruz have a history of abusive overreach in the case of the Gerawan Farming workers, clearly demonstrating growing desperation in the trending anti-union sentiment in the private sector, and the vast agriculture industry of California.

The California Legislature is responsible for authority and oversight of this state board. But there has been no oversight from the Legislature since Torres- Guillén was appointed by Gov. Jerry Brown in 2012, despite numerous appeals from the thousands of Gerawan farmworkers to the governor, and the Latino Caucus.

Background on Gerawan and ALRB

In October 2012, the United Farm Workers Union insisted that a collective bargaining agreement covering Gerawan workers be reactivated — even though there had been no union involvement with the workers since prior to 1995. Some of the workers then began a process for a vote to decertify the union.

A vote on the UFW decertification was held last fall, on Nov. 5, 2013. But by Nov. 19, 2013, the results of the vote were held up by the ALRB, which claimed a large number of the ballots ineligible. In an email, ALRB Executive Director J. Antonio Barbosa charged Gerawan Farming with “misconduct, that allegedly affected the outcome of the election.”

Many in the farming community claim the ALRB and UFW have joined forces to boost the union by targeting one of the biggest non-union farming operations in the state.

Following several years of ALRB abuse of power, as well as constant coersion of the farmworkers, on Dec. 16, Gerawan Farming filed a constitutional challenge against the Agricultural Labor Relations Board, with the United Farm Workers of America named as a “Real Party of Interest.”

Gerawan Farming filed the lawsuit with the California Court of Appeal, Fifth District in Fresno, challenging the ALRB’s invocation of the California’s Mandatory Mediation and Conciliation Statute. The mandatory mediation statute was signed into law by Gov. Gray Davis in 2002.

Most recently, Arcelia Hurtado was brought in to the ALRB to spearhead the apparent Gerawan Farming takedown.

According to Hurtado’s bio, she is a Policy Advisor for the National Center for Lesbian Rights. The bio says she was raised in the Lower Rio Grande Valley of South Texas by Mexican immigrant parents, and “has devoted a substantial portion of her time to community service serving on the boards of various professional and non-profit organizations such as Women Defenders, San Francisco La Raza Lawyers Association, Our Family Coalition, and Bay Area Lawyers for Individual Freedom.”

Based on this bio, why would Hurtado actively fight against the farmworkers who are trying to decertify the UFW labor union, and ignore their legal and civil rights? It is telling that the ALRB brought in a high-powered, evidently highly compensated, Hispanic civil rights attorney.

The UFW has never formally represented Gerawan farm workers because the union allegedly failed to contact the company for two decades after workers 20 years ago voted for union representation.

Officials with the ALRB say the issue is not as simple as their alleged refusal to count ballots. “Arcelia Hurtado, an attorney for the ALRB, said the board is currently investigating allegations that Gerawan Farms broke the law by instigating last year’s decertification vote,” ABC 30 reported in August. Hurtado says other allegations are currently being investigated by the ALRB as well. “We are investigating irregularities in the vote,” Hurtado said.

The farmworkers are protesting because last November they took a vote to decertify their contract with the UFW. The ballots were handed off to the ALRB, which has yet to count them.

The ALRB’s state-sponsored union bullying effort continues even after longtime Gerawan Farming employee, Silvia Lopez, filed a federal civil rights lawsuit against ALRB board members and top staff, for their refusal to count the ballots from the November 2013 election.

Many in the farming community claim the ALRB and UFW have joined forces to boost the union by targeting one of the biggest non-union farming operations in the state. Should they succeed in unionizing Gerawan Farming employees, adding the 5,000 farmworkers would double union membership, and certainly boost the ALRB’s status.

The abusive overreach by the ALRB and its general counsel shows growing desperation in the trending anti-union sentiment in the private sector, and the vast agriculture industry of California.

Despite Silvia Lopez’s plight on behalf of the farmworkers for more than two years, the Legislature and the governor have been silent. “We don’t want the union — we want the right to vote,” said Lopez. “We want to be heard!”

However, if the ALRB loses, or makes procedural errors, because it is a state agency, Hurtado, Torres- Guillén, and De La Crus will pay no price. Who will hold these women accountable?