This is Part ll; Part l Sacramento Arena Deal Ain’t Over ’til It’s Over

Sacramento has spent 13 years trying to build a publicly funded sports arena, with Mayor Kevin Johnson and Sacramento Sen. Darrell Steinberg involved every step of the way. Called a rich-people’s playpen, local citizens will be forced to pay an hefty price for a new arena for the Kings, in order to keep them from leaving, of which the Sacramento City Council voted 7-2, to pay two-thirds of the cost.

The arena has been pushed Sacramento Mayor Kevin Johnson, a former NBA star. But many say he acts as he was elected mayor of the Sacramento Kings. 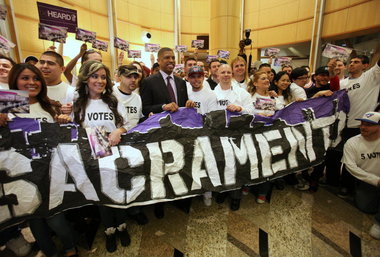 The reason this story is front and center in Sacramento, is because Johnson has Measure L on the November ballot.

“The Checks and Balances Act of 2014″ proposes the mayor as chief executive, responsible for the budget proposal, who chooses a city manager, and no longer will have a voting position on the city council.

Johnson has modified the Executive Mayor plan four times, each rejected by citizens or voters. While the idea of a strong mayor has some merit, it is Johnson as the Strong Mayor that most people object to, as well as possible future mayors. His time as Mayor is not what he promised. He has instead spent his political capital on professional sports arenas and personal power, style over substance.

Johnson has pushed several times for this major change to the city charter to make an “Executive Mayor,” to not just be one of nine votes on the City Council. But he hasn’t been able to get enough support from earlier councils or the voters. This is the first year he finally wrangled some council support, but not by all members.

Johnson may want to be Chief Executive of Sacramento, but many feel he hasn’t earned the title, or the actual role. An effective city Mayor is capable of tackling citywide issues, while making long-term goals.A new sports arena does not make a leader. With only a new publicly subsidized Kings basketball arena on his “to do” list since being elected in 2008, Mayor Kevin Johnson has missed out on even acting like a city leader… or a strong mayor.

Johnson’s Measure L will give Sacramento’s mayor “powers beyond any city executive in California.” The mayor would be the sole boss of the city’s hired city manager. The city manager under the current system reports to the entire city council. In a “weak mayor” city, by contrast to a “strong mayor” city, the mayor’s powers are similar to those of any member of the city council – something Johnson has objected to since he was first running for Mayor.

While a mayor does not have the influence and authority of a CEO, the job takes more persuasion skills than decision skills to run a city. And, for the Sacramento voters who bow down to the Kings and Johnson as royalty, being Mayor is a job, and does not follow a coronation.

When Assistant City Manager John Dangberg’s deposition was taken, the attorneys obtained more evidence supporting allegations of fraud and illegal gift of public funds.  Dangberg, as the lead negotiator for the City and key architect of the Entertainment Sports Complex project, was unable to give any plausible reason for how the City’s contribution to the project is capped at $258 million.

His testimony as to the value of the real estate parcels reflected in the term sheet and the lack of any assigned value of the digital signage rights and parking rights to be conveyed to the Kings owners is laughable.

In other depositions, Sacramento Economic Development Director Jim Rhinehart and Councilman McCarty testified that multiple representatives of the Kings Ownership group demanded that the city compensate the Kings investors by $125 million because they were “overpaying” for the franchise.

Officials with the city, unable to contribute any more cash than the $258 million offered to the former owners of the Sacramento Kings, the Maloof family, in 2012, instead agreed to provide a litany of “sweeteners” in the form of city assets including properties located throughout the city, thousands of off-street parking spaces, and digital billboard leases.

The testimony squarely supports the serious allegations that city officials were caving into the will of the NBA and neglecting to consider the best interests of Sacramento’s citizens when they promised millions of dollars of corporate welfare to the Kings Ownership group in 2013, Soluri explained. “These officials neglected to do basic due diligence, to negotiate in good faith to get the best deal for the taxpayers who will be on the hook for this deal, and worst of all, took steps to deceive the public about the true nature and scope of the city’s public subsidy. It’s shameful.”

In the CEQA case, Sacramento Superior Court Judge Timothy Frawley identified a flaw in the city’s environmental review relating to inherent traffic problems. City officials claimed the flaw was minor. But many others say the city deliberately ignored the inevitable traffic backups when 17,317 of Kings fans are moved from the existing arena north of Sacramento, right into the heart of downtown.

Sacramento television station KCRA 3 requested and inspected hundreds of pages of emails and memos from Caltrans related to the arena project, which showed city officials disagreed on how many additional cars will end up at the downtown site and how traffic impacts are being anticipated.

“I think the minimum number of vehicles would be 8,000 — not 3,600,” wrote Jim Calkins, the head of freeway operations for the Sacramento area, according to KCRA 3.

But many others involved think the traffic numbers are much higher, given that the new Kings arena will seat more than 17,500 sports fans — all of whom will not be using public transportation.

Caltrans grades segments of freeways from “A” to “F” based on congestion.

“Based on our current analysis and based on the current conditions, the traffic does back up on Interstate 5, and it does exceed the capacity right now,” Amarjeet Benipal said. He gave it a “F” level of service  during the commute times.

Traffic impacts during games are anticipated to back up on I-5, miles back, beyond interchanges and onto Interstate 80, Highway 50, and possibly even onto Highway 160 –freeways which are already significantly congested.

Judge Frawley said the city, in its voluminous environmental impact report, mishandled the issue of potential traffic problems that would occur when the new arena opens at Downtown Plaza in October 2016. He said the city’s traffic-mitigation plan is missing “specific performance standards” to determine whether the plan will work to contain traffic problems.

Frawley also previously commented on whether “additional traffic impacts” would occur on nights when attendance at the downtown arena surpasses the building’s 17,500-seat capacity.

Attorneys contended that the true capacity of the proposed is 31,000, not the 17,500 the Kings say; the building has room for 2,000 standing-room-only attendees, and that the plaza outside is estimated to hold 12,000. The City ignored the outdoor event area, a major feature of the project, which will significantly add to traffic impact.

Getting his way – at any cost

But Johnson’s group turned out to be so closely linked to the Sacramento Kings organization, the Fair Political Practices Commission fined him $37,500 for his failure to report more than $3.5 million in “behest” payments from the Kings. According to the FPPC, “[T]hese payments are not considered campaign contributions or gifts, but are payments made at the ‘behest’ of elected officials to be used for legislative, governmental or charitable purposes.”

Taxpayers’ Case Against City of Sacramento

In the taxpayers’ case, a recent answer to a complaint reported, “Council member McCarty recalls having personal conversations with individual members of the Sacramento Investor Group prior to the March 26, 2013 vote approving the Term Sheet requesting additional compensation from the City above the City’s proposed contribution to the ESC project.”

“Respondents further admit that Council member McCarty recalls conversations with City Manager Shirey during this same time period in which Mr. Shirey mentioned that members of the Sacramento Investor Group had requested that the City contribute $125 million more to the arena project, and Mr. Shirey rejected this request.”

Those behind the lawsuit are not the only ones who think that Mayor Johnson and other city officials aren’t being honest about the real size of the public subsidy. Public policy watchdog Eye on Sacramento says that when all of the publicly owned assets being thrown into the deal are accounted for, the public’s contribution is actually $377 million — far higher than the city’s $258 million claim.

The city also agreed to give the arena’s private development group the city’s empty 100-acre plot next to Sleep Train Arena in North Natomas and six other city properties, five of them adjacent to or near the downtown arena site. City officials are also giving away the city’s parking lot at the site, and the revenue from parking meters, after claiming the parking lots have no value.