California, the state obsessed with being first at everything, is aiming to add another first to its record books — Not content to be the first state in the country to tax the air we breathe, California will be the first in the nation to impose a cap and trade tax on transportation fuels.

The move afoot by the radical left to strip Americans of their cars under the guise of environmentalism, knows no bounds. 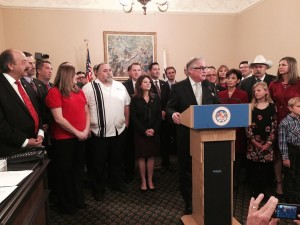 With the second highest gas taxes in the country, and a flailing cap and trade program, whose only trading partner is Quebec, California is already paying the price.

While the rest of the country is currently enjoying lower gas prices, Californians will be faced with a hefty new gas tax January 1, of roughly 20 to 90 cents, per gallon of gas. The California Air Resources Board secretly created the new tax on gas without public knowledge or legislative approval.

“We’re all enjoying the lowest gas prices in years but when the gas tax kicks in, we will feel the pinch at every level of our economy,” Assemblyman Patterson said at a Capitol press conference I attended Monday. “…and we know that low-income families will be hit hardest. From the dining room table to our favorite restaurant, even the gas budgets at our school districts will be impacted, which means less money goes towards educating our kids.”

“Sacramento bureaucrats need to understand that gas is not a luxury; it’s essential to get to work, to get your kids to school,” said Sen. Vidak. “Where I live people are still standing in food lines.  This is going to hurt the folks that can’t afford it the most.”

Who are the Sacramento bureaucrats Vidak referenced? The California Air Resources Board, and specifically, Mary Nichols, the ARB Chairwoman notorious for abruptly shutting down public meetings when the public is finally allowed to speak.

What is the Fuel Mandate?

Under the CARB fuel mandate, companies that sell transportation fuels will be required to comply with the cap-and-trade program regulation. But this based on phony science regulations, created by the CARB.

CARB’s Chairwoman Nichols, covered up fraud by CARB employee, Hien Tran, and his mail order Ph.D. But even with full knowledge of Tran’s phony credentials, in December 2008, CARB went ahead with the diesel emissions rules based on Tran’s report.

Then the CARB announced it would place transportation fuels under its cap-and-trade program, with a focus on “the largest industrial emitters,” according to Nichols. Interestingly, in a 2013 op ed, Nichols explained the role of CARB as an unelected board of bureaucrats:

“The reason why California went with cap and trade as opposed to a (carbon) tax is very simply that the legislature delegated this program to the Air Resources Board,” Nichols said. “As an agency of the administrative arm of government, we don’t have the power to adopt a tax. We do have the power to adopt a cap and trade program. So we chose that as the preferable way of pricing carbon.”

Consumers are facing significantly higher gas prices Jan. 1 under this new fuel regulation and tax, passed by a board made up of unelected, unaccountable, bureaucrats.

The fallacy of the tax

“Automotive engineers are constantly working on ways to improve the internal combustion engine and carry it into the future,” Patrick E. George wrote in “Top 10 Improvements in Engine Design. “How many other inventions do you know that have been continuously refined for more 150 years?”

“Automobile engines have been in constant evolution since the very beginning of motoring,” George said. “Today they are more powerful, quieter, more durable, less polluting and more fuel-efficient than they have ever been before, thanks to constant advancements in engine design and technology.”

What Nichols refuses to acknowledge, and the fallacy of the CARB argument, is that combustion engines today are clean and green.

It is important to note that in 1908 when the first automobile rolled off of the assembly line, average life expectancy for American men was slightly less than 50 years, and only 52.8 years for women. Today, average life expectancy in America for men is 76.4 years; for females it’s 81.2 years — a whopping improvement. The deadly exhaust fumes theory just doesn’t bear scrutiny.

The Tax Will Hurt Everyone 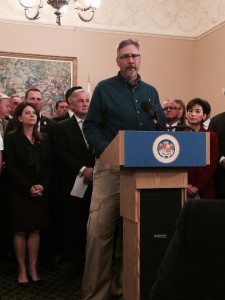 Also at the Monday press conference were Cheryl and David Salter of Salter’s Distributing in Madera, and Steve Ward, the legislative analyst for the Clovis Unified School District, a district of 40,677 students.

The Salters said they are distributers of non-food products to grocery, convenience and hardware stores throughout California’s Central Valley. They expect their $20,000-per-month gas bill to climb immediately another $1,600 to $5,000, because of the new gas tax.

Ward said the Clovis School District expects their budget to increase dramatically, but not to improve education. Rather, he expects the school district’s gas costs to increase $30,000 up to $140,000, and on up to $185,000 annually by 2020.

Ward explained this money could have gone to additional educational services for students including 3,000 hours of after school special needs tutoring and mentoring, five full-time bilingual instructors, and the purchase of more than 50,000 textbooks.

Instead, this money will go to the government.

“I love it when the ARB starts talking out of both sides of its mouth,” said Assembly Minority Leader, Kristin Olsen, R-Modesto, referencing the lack of evidence of environmental benefits of cap and trade. “Yet they also talk about raising gas prices purely to get people out of their cars.”

Who Is Calling the Shots?

Last year, lawmakers tried to get the tax delayed for one year through AB 69, a bill by Fresno Democratic Assemblyman Henry Perea, and co-authored by nine Democratic Assembly and Senate members. But in one of his last acts as Senate President, Sen. Darrell Steinberg unilaterally killed the bill without ever allowing a hearing. AB 69 made Nichols bristle. 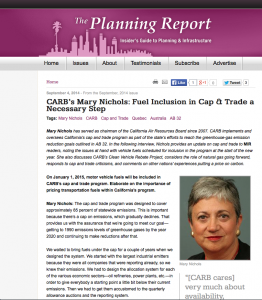 “The bill is unnecessary and counterproductive,” said ARB Chairwoman Mary Nichols about AB 69, in a September interview with The Planning Report, a trade publication about urban planning, and public infrastructure investment. “It’s unnecessary because the legislation suggests that we need to take more time to educate the public about this program. We’ve been educating the public about this program since we began AB 32 in 2006.”

“We’re very confident that anybody who is subject to this rule knows what they need to do and is capable of complying,” Nichols added.

“The amount is small,” Nichols arrogantly said over the weekend in the Sacramento Bee, about the gas tax. “It does get hidden in the noise, in the other changes that are constantly taking place in the pricing of gasoline.”

In The Planning Report interview, Nichols explained the purpose of including oil and gas in the cap and trade system:

“Bringing fuels under the cap expands the number of allowances in the system and makes the whole program much more liquid—meaning there are more allowances available to be traded. Of course, it addresses the single largest source of carbon pollution in California: the combustion of motor vehicle fuels. It’s an important element of the program and has been a part of it since we first adopted the cap and trade regulation. It’s on the books.”

The Importance of Autos

Having your own car means freedom and independence. Whether you are a newly licensed driver of just 16 years, an elderly driver holding on to independence, or a physically disabled driver, the automobile means access and self-sufficiency.

The automobile has also played a crucial role in the economic, social and political progress achieved since Henry Ford produced the first Model T in 1908. Fortunately, there are some in the state who still recognize this.