The Golden State of California has been dubbed “Crazifornia” and “La-la land,” and called “the land of fruits and nuts.” Furthermore, California’s governor, Jerry Brown, is known as “Governor Moonbeam,” a moniker from which he’d like to disentangle himself. 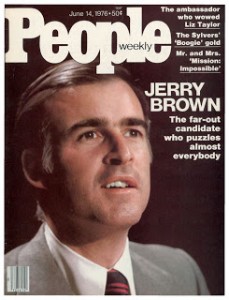 The rest of the country believes California has earned and deserves these disparaging names. And unless something changes in this batty state, Governor Moonbeam is on track to meticulously and completely destroy the state’s economy and bankrupt the government.

But hey… who’s going to stop him? The media?

While repeated polls show voters’ priority issues are the economy, spending, job creation, health care and security, Gov. Jerry Brown recently announced his priority issue is… Climate Change. And he threw in High-Speed Rail as his infrastructure cause du jour — in spite of the majority of Californians who find global warming and high-speed rail among the lowest priority issues.

It’s mind boggling that Jerry Brown was recently reelected and did not spend a dime on his campaign, given that California has the country’s highest income taxes and sales tax, the second highest gas tax, the only “cap and trade” tax in the nation, and has been ranked for nine-years-in-a-row as having the worst business climate in the country.

“The Governor and the majority in this Legislature are the tax-and-spend liberals many of us battle against daily and they continue to steer our beloved state into a financial and economic mess,” Republican Assemblywoman Shannon Grove said following Brown’s latest press conference announcing his new $113 billion state budget. “This $113 billion budget does not reflect financial restraint or moderation. This is the biggest California budget on record, 31 percent higher than when Governor Brown drafted his first budget just 4 years ago,” Grove added.

In my recent interview with Republican California Congressman Tom McClintock, we discussed Gov. Jerry Brown and the state of California politics under Brown’s leadership – in the 1970’s and today. “The Left will not be constrained by process or the constitution,” McClintock said, explaining the lawlessness at the highest levels of California government today.

McClintock and I discussed the many wonders of California — a state blessed with the most amazing climate anywhere in the country. California has the most bountiful resources anywhere in the continental United States. California is poised on the Pacific Rim in a position to influence and dictate world trade for the next century. “Yet people are finding a better place to live and work and raise their families in the middle of the Nevada and Arizona and Texas deserts,” McClintock said. “I submit to you that no conceivable act of God could wreak such devastation as to turn California into a less desirable place to live than the middle of the Nevada Nuclear Test Range.  Only Acts of Government can do that. And they have.”

How and Where California’s Collapse Began

McClintock said the beginning of the collapse of California’s economy is tied to many critical events: the rise of radical environmental leftism, first begun in 1974; the abandonment of constitutional checks and balances,  imperative for constraining spending and borrowing; and the rise of rule by public employee unions, increasing litigation, more and higher taxation, and illegal immigration. 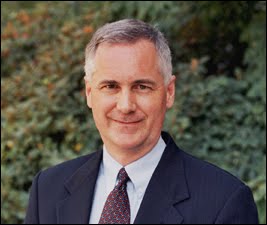 “The first was the rise of environmental Ludditism with the election of a radical new-age leftist named Jerry Brown as governor of the state – an election that also produced overwhelming liberal majorities in both legislative houses,” said McClintock.

This radical new-age leftist had his own vision for California “– an incoherent combination of pastoral simplicity, European socialism and centralized planning,” McClintock said. “At the center of this world view was a backward ideology that he called his ‘era of limits’ — the naïve notion that public works were growth inducing and polluting and that stopping the expansion of infrastructure somehow excused government from meeting the needs of an expanding population.”

“Brown infused his vision into every aspect of public policy, and it is a testament to his thoroughness and tenacity that its basic tenets have dominated the direction of California through both Republican and Democratic administrations,” McClintock added.

The Architect of Public Employee Unions

Public employee unions out spend all other special interest groups politically. McClintock said that they hold compliant majorities in the state legislature and most local agencies. “The result has been radically escalating personnel costs and radically deteriorating performance.”

During his first two terms, Gov. Jerry Brown escorted in the political Left and took over California’s government. Brown’s early policies set about destroying the quality of life that Californians once enjoyed, and wistfully took for granted.

As McClintock and I discussed, California had the finest highway system in the world. Our public schools were unsurpassed… until they were. California’s free state university education was available to everyone.

Our energy production was abundant and inexpensive. We had perpetually low unemployment — well below the national rate.

There is no coincidence that all of this changed under Brown’s first eight years in office, and he’s expanding public policies again with disastrous results.

At the top of Brown’s to-do lists during his first two terms were stopping the state’s highway construction program, which abandoned many routes in mid-construction.  Evidence of these half-built behemoth on-ramps and overpasses stood along state highways and interstate 5 for years looking more like they had been bombed, than abandoned by a politician.

McClintock said Brown cancelled important water projects, conveyance facilities and dams, and created the California Energy Commission that blocked approval of any significant new generating capacity.  And if all of this destruction wasn’t enough, Jerry Brown signed into law “volumes of environmental regulations that created severe impediments to home and commercial construction,  empowering an incipient no-growth movement that began on the most extreme fringe of the environmental cause and quickly spread.”

It is important to understand Jerry Brown’s history because the Democratically-controlled Congress has emulated Brown’s radical policies, and tried to do much the same. But with the November election ushering in a Republican Senate and beefing up the Republican House, it’s a paramount opportunity for critical change. And with recognition of these disastrous policies, McClintock is hoping Californians also see the importance of the elections, and can enjoy the fruits of that election someday soon… before Jerry Brown does any more damage to the once Golden State.