As Wisconsin is set to become the 25th Right-to-Work state, California Gov. Jerry Brown is ignoring thousands of farm workers who don’t want to be unionized.

In one of the most significant labor relations fights in the country proceedings have turned ugly, with many questioning the legal tactics and scruples of the Agricultural Labor Relations Board.

The workers at Gerawan Farming have been trying since October 2012 to decertify the United Farm Workers labor union. The workers are not only being fought by the UFW union, Brown’s Agricultural Labor Relations Board has thwarted them at every turn. And pleas to the Democratic Governor and Legislature have fallen on deaf ears, despite their claims to care for farm workers.

The only help the Gerawan workers have received is from state Assembly members Jim Patterson, R-Fresno, and Shannon Grove, R-Bakersfield.

Patterson has introduced AB 1389,the Fair Contracts for CA Farmworkers Act  which would give workers rights they currently don’t have. AB 1389 would give farm workers the right to attend and monitor all labor contract mediation meetings held by the Agricultural Labor Relations Board so they can understand the terms of their contract and the ability to vote to approve or decline the terms of that contract, Patterson said. The bill would also require the ALRB to nullify a union contract if the union abandons the workers for a period of three or more years. Grove is a co-author. 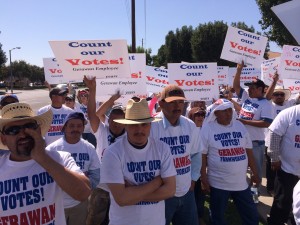 The thousands of California farm workers fighting against a forced labor contract could finally have the legal authority to negotiate terms in their own contracts.

In an interview with Patterson, he explained if the union abandons or fails to represent the workers for a period of three or more years, the ALRB must decertify the union contract, removing them as the workers’ representative.

Farm workers would be allowed to attend all mandatory mediation meetings in order to monitor the process and understand the terms of their contract.

Why the bill is needed

The United Farm Workers labor union and the state Agricultural Labor Relations Board have joined forces to target the thousands of workers at one of the biggest non-union farming operations in the state. Should they succeed in unionizing the 5,000 – 10,000 Gerawan Farming employees, it would more than double the dwindling UFW union membership. 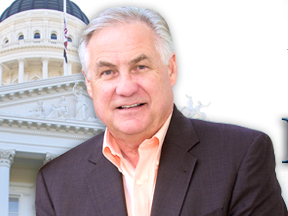 The UFW won an election to represent Gerawan Farming’s workers 23 years ago. But after only one bargaining session, the union disappeared and wasn’t heard from for more than 22 years.

In October 2012, the union reappeared to impose a contract on Gerawan Farming and its employees — without a vote of the workers. The UFW union insisted that a collective bargaining agreement covering Gerawan workers be reactivated — even though there had been no union involvement with the workers for decades. Some of the workers then began a process for a vote to decertify the union.

But the workers don’t want the union.

More than 3,000 Gerawan farm workers signed a petition to hold a decertification election to remove the union. Despite strong protests from the union, an election was held on November 5, 2013. Those votes were impounded by the ALRB and have never been counted.

The rights of the farm workers continue to be denied and the ballots have not been counted by the ALRB.

The workers have also been shut out of ALRB hearings and don’t have the legal right to approve or decline a labor contract.

Many of the Gerawan Farming workers say their employer pays the highest wages in the fruit business. Just since 2012, California’s minimum wage has gone up three times, while Gerawan has raised wages more than seven times. The farming company has a longstanding reputation of paying workers above California’s minimum wage, and according to the employees, leads the industry in wages. In addition, the family farming company offers paid vacation, retirement bonuses, and pays for workers’ children to attend Catholic school.

Yet all of this would go away under the terms of the ALRB-ordered contract; the UFW would be given the right to demand that Gerawan fire workers who refuse to pay union dues or fees to the UFW.

“Brave farm workers throughout California continue to be on the losing end of an unfair and unjust process that allows contracts to be forced upon them without their approval. Without the right tools, workers will continue to be cast aside by the very agency that claims to protect them,” Patterson said.

“It is wrong to force workers into a union contract against their will, but that is what the Governor’s appointees to the ALRB are doing to thousands of Gerawan Farm workers,” said co-author Assemblywoman Shannon Grove (R-Bakersfield). “It’s also wrong for the ALRB to not count the workers’ votes.  I’m standing alongside Assemblyman Patterson and thousands of California’s farmworkers to defend their right to choose.”