Water Released From CA Dams Is For Kayakers and Trout

California once built dams to store water from the wet years so there would be plenty in dry years.  But radical environmental laws have squandered our existing water supply, and obstructed the construction of any major dams, while the population has nearly doubled. 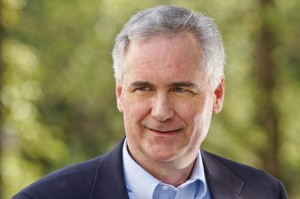 Gov. Jerry Brown and President Barack Obama have the authority under the existing Endangered Species Act to convene a process to suspend environmental laws during the drought.  Governor Brown also has the authority to request the president to act. Despite repeated calls to do so, neither has responded to requests from Congressman Tom McClintock.

McClintock told me in an interview Wednesday that hydrologists have confirmed that California’s current drought is the worst in 1,200 years. Yet the state’s water officials are letting water out of dams – water we will desperately need this summer and fall.

Last week, a federal fisheries agency ordered the California branch of the Bureau of Reclamation to release 15,000 acre feet of water (4.8 million gallons) from the New Melones Dam so 23 fish could swim to the Pacific Ocean. This order came right in the middle of California’s record-breaking drought, as people and farmers are threatened with fines for using water.

The Bureau of Reclamation ordered the South San Joaquin Irrigation Water District to release the water, and then the bureau ordered the SSJID to do it again — this second time was for six fish.

Governor Brown’s solution to the drought is to order California residents to stop watering our “little green lawns,” and take shorter showers or face a $500 fine.

The water released last week is enough to meet the annual residential needs of a human population of 300,000, McClintock said.  Instead, government chose to use the precious water to flush 29 migrating fish out to the Pacific Ocean.

Ironically, the offspring left behind by these fish will likely be eaten by non-indigenous predator fish.

Back To The Future

Last year McClintock couldn’t get anyone to care when Folsom Lake was almost empty, and the Bureau of Reclamation released nearly 7,000 acre feet of water (2.275 million gallons) from Folsom and Nimbus dams.

And in April of last year, the New Melones and Goodwin Dams on the Stanislaus River released nearly 63,000 acre feet of water (20.5 million gallons) – also to assist the steelhead fish migrating to the Pacific Ocean. “The irony is that if we hadn’t built these dams, these rivers would be nearly dry in this drought and there wouldn’t be any fish,” said McClintock.

McClintock said he was recently told by eight different park rangers at Folsom Lake that they are currently releasing water from the dam, and PG&E is forced to release water from its hydroelectric dams – for kayakers.

“Who in his right mind would dump enough water to meet the annual residential needs of a population of 300,000 human beings in order to nudge toward the ocean the offspring of maybe 29 steelhead trout – it could be as few as 6 – in the worst drought in 12 centuries?” McClintock asked. “Yet that is precisely the policy of this administration.”

McClintock has introduced HR 1668, the Save Our Water Act.  “It simply provides that during an extreme drought, the requirements for massive environmental pulse flows are suspended,” McClintock explained. “I want to urge speedy consideration and passage of this act, but I fear it will not come in time to prevent the exhaustion of our remaining water supply.”

I aksed Rep. McClintock what California residents can do to put a halt to these anti-human policies. “Stop electing ideological zealots, and hold officials accountable in the next election” he said.

McClintock warned of this practice last year, and appealed to state and federal water managers to suspend these water releases during the drought.  But because few people actually believed that our water policy could possibly be so foolish, public interest waned.

But California is now in a crisis that cannot be ignored. “Californians are now starting to realize that our environmental laws long ago passed from the realm of reason to the realm of ideological extremism,” McClintock said. “Droughts are nature’s fault.  Water shortages are our fault.”