Subtitle: The Fleecing of Sacramento’s Taxpayers

Sacramento’s City Manager John Shirey released the proposed 2015/2016 budget last week. It’s clear that this city manager, the mayor, and the city council members are cavalier with their spending of other people’s money. More is never enough. And the word “austerity” is not in their vocabularies. 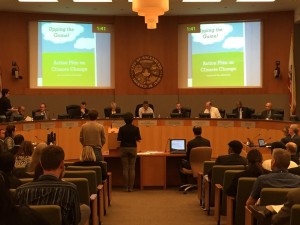 The other important issue to note is even with his latest attempt to become a strong mayor squashed (again) by the voters last year, Mayor Kevin Johnson is the driving force anyway behind this budget and the decisions on how the City spends taxpayers’ money.

The City has almost $1.2 billion in unfunded long-term liabilities for retirement benefits, which include pensions, other retirement benefits (OPEB), and payoff of leave balances upon retirement or separation. According to the City’s budget, “on an actuarial basis, the total long-term liability for pension and retiree medical benefits is approximately $3.1 billion, but only $2 billion has been set aside to fund those benefits.” Yes, that says “Billion.”

“Unfortunately, the City’s expenditures are forecast to once again outpace revenues beginning in FY2016/17,” according to the budget.

The Sacramento Underground Blog also found something else worth noting in the proposed city budget:

The proposed budget “reflects adopted Council priorities” and amounts to almost $1 billion – that’s almost $2,000 for every man, woman and child in Sacramento. Think for a moment … what could you do for your family, and what kind of amazing vacation could you take, if you had $2,000 extra for each person in your family?  But I digress.

So what exactly is the City proposing to do with all of that money taken from you in taxes and fees? Well, to start with, each Council Member will increase their own budget by 6%, or about $25,000 over last year’s approved amount. That’s right, you’re paying more in Measure U taxes so that they can fatten their own budgets. Between the Mayor and City Council, there is a proposed increase of over $790,000 from the last approved budget.

Sacramento residents are paying more in Measure U taxes so city council members they can fatten their own budgets? That wasn’t part of the deal. Measure U taxes were only supposed to be allocated to restoring services to libraries, animal care, fire, police and city parks.

Mayor Johnson should be happy with the surprising windfall of extra tax money coming in courtesy of Measure U, the temporary half-cent local sales tax increase voters passed in 2012. Measure U was expected to generate only $31 million in the current fiscal year, but will actually bring in about $40 million.  Set to expire in 2019, the city expects similar gains each year for the next four years. Sacramento residents pay 8.5% sales tax.

“The fact that Measure U funds will sunset in 2019 is also a significant challenge that we must have a plan to address,” Mayor Johnson warned in March in his budget memo to the city council. “Even with Measure U resources to assist with the restoration of previously grant-funded public safety positions, the City will continue to struggle to return to long-term structural stability in the General Fund,” the budget states, only one month later. And what pray-tell will Sacramento do with this extra $40 million? Read on. And weep.

Strong Mayor Through the Backdoor

The Mayor has his own pet projects and priorities, and with the complacent agreement of the city council members, directed City Manager Shirey to draw up a budget that funds twenty never-researched, not-yet-examined projects. “The City Manager is directing $22.2 million in General Fund and Measure U half-cent sales tax resources to address priority initiatives and investment in key areas,” a press release from the City said.

Johnson said in his March Budget memo to the city council he wanted to see the following specific projects to “grow the pie” in Sacramento economically:

-Development of the Downtown Arena and surrounding areas (publicly subsidized)

-Development of the Railyards and a potential MLS stadium (publicly subsidized?)

-Transportation including the streetcar and intermodal projects ($150 Million to build 3.3 miles of circulating streetcar)

-Increasing downtown housing (how much of it publicly subsidized?)

 $2.1 million to plan strategically for growth and housing in the city core – ($2.1 million for planning, not building – gift to connected developers)

 $1.1 million for the Homeless Housing Initiative (should go to mental health care)

The City Manager and Mayor Kevin Johnson know they will face huge shortfalls in retirement and retiree health care costs, but continue to ignore the mounting debt. Spending other people’s money also means they believe this massive unfunded debt is other people’s problems. “With the known cost of funding approved labor contracts coupled with increases associated with pension benefits required by PERS, shortfalls are anticipated in out-years,” the city manager reported in the budget.

Taxpayers are being set up; no “temporary” tax remains temporary for long once officials get used to the money flowing in. The only way city officials can get a tax passed by the voters these days is to call it “temporary.” Remember Gov. Jerry Brown’s Proposition 30 – the “temporary income tax? Only months after voters passed Prop. 30, Democrat legislators and the State Superintendent of Schools Tom Torlakson was already calling for the tax to be made permanent.

The proposed $19 million in spending on Mayor Kevin Johnson’s new and unvetted projects is a disaster in the making, particularly in light of the city’s rapidly approaching fiscal cliff. Sacramento taxpayers, what will it take before enough is enough?